Jason von Ehrenkrook is an Assistant Professor of Religious Studies at the University of Massachusetts, Boston. He’s writing a book a book on the use of the Bible in presidential discourse. 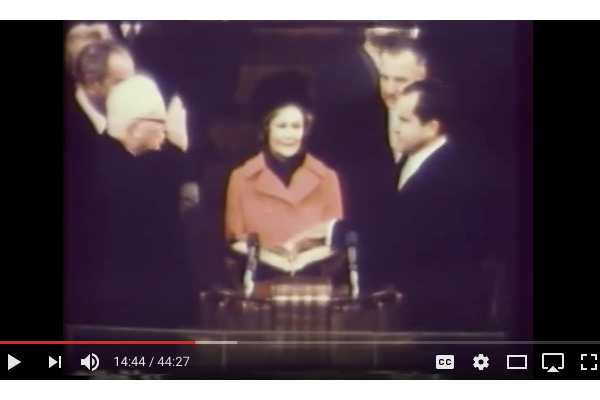 Whether we like it or not—and let’s remember that the nots have a nearly 3 million person advantage—on January 20, 2017, Donald J. Trump will be sworn in as the 45th president of the United States of America. The day’s festivities will certainly include spectacular displays of patriotic pageantry. National symbols and sounds will parade down Pennsylvania Avenue and adorn the steps of the U.S. Capitol. The inaugural stage will be a veritable who’s who of the rich and powerful. Former presidents. Members of Congress. Supreme Court Justices. Entertainers. Prominent religious leaders. And, very likely, not a few billionaires.

If past is prologue, however, one oft-overlooked protagonist, the Holy Bible, will occupy a particularly privileged place in this quadrennial American ritual. Since George Washington initiated this presidential drama on April 30, 1789, the Good Book has been a significant player in the transition from ordinary citizen to chief among citizens. And the tale of the inaugural Bible is quite fascinating.

The Bible’s first entrance onto the inaugural stage was surprisingly haphazard. As George Washington stood on the balcony of Federal Hall in New York City, ready to swear fidelity to the freshly ratified Constitution, the inaugural proceedings came to screeching halt. This young, fledgling, post-Revolution Republic had just encountered its first national crisis—a missing Bible. Which, I suppose, makes Jacob Morton one of the unsung heroes in U.S. history. When Morton, Master of the nearby St. John’s Masonic Lodge, became aware of the Bible’s absence, he hastily retrieved the Lodge’s altar Bible, thus averting the crisis. With Bible now beneath hand, Washington finally could be sworn into office. As the story is told, the newly anointed president, as if acknowledging the impotence of an oath without the Sacred Scriptures, bent down and reverently kissed his inaugural Bible as Robert Livingston, Chancellor of New York and the one who had just administered the oath of office, loudly proclaimed, “Long live George Washington, President of the United States!”

The arbitrary circumstances of Washington’s inaugural Bible would belie its eventual apotheosis as a national relic. Indeed this text remained quite busy after the first presidency, participating in the funeral processions of both Washington and Lincoln and acting as sacred catalyst for the presidencies of Warren Harding, Dwight Eisenhower, Jimmy Carter, and George H. W. Bush. President Carter recognized the symbolic power in his choice of Bible when, in the opening of his inaugural address, he called attention to the two Bibles on the stage: “Here before me is the Bible used in the inauguration of our first President, in 1789, and I have just taken the oath of office on the Bible my mother gave me a few years ago, opened to a timeless admonition from the ancient prophet Micah (Micah 6:8).”

This strategic display of the inaugural Bible, or in some cases multiple Bibles, including opening text to a favorite passage, is very often pregnant with significance. Although not every president chooses to take the oath on an open Bible, the selected passages of those who do can be quite illuminating.

Franklin D. Roosevelt, with perhaps a subtle nod to the forthcoming flurry of New Deal initiatives that would aim to assist the “forgotten man” struggling to eke out an existence, took the oath of office on the words of 1 Corinthians 13:13—“And now abideth faith, hope, charity, these three; but the greatest of these is charity.” Just a couple of years after signing into law a measure inserting the phrase “One nation under God” into the Pledge of Allegiance (June 14, 1954), and only a few months after establishing “In God We Trust” rather than “E Pluribus Unum” as the nation’s official motto (July 30, 1956), Eisenhower took his second oath of office on the phrase, “Blessed is the nation whose God is the Lord…” (Psalm 33:12). Richard Nixon, who campaigned his way into the Oval Office in part by promising to bring an end to the conflict in Vietnam, pledged to uphold the Constitution on the famous words of the prophet Isaiah, “…and they shall beat their swords into plowshares, and their spears into pruning-hooks” (Isaiah 2:4). Isaiah may have been a prophet, but clearly he failed to foresee that Nixon’s plowshares and pruning-hooks included B-52 bombers raining hell on Cambodia.

While the Bible’s role is most prominently on display during the swearing-in ceremony, occasionally the Sacred Scriptures will make at least a brief cameo appearance within inaugural speeches. Sometimes biblical language functions as a kind of poetic ornament that baptizes, as it were, a speech in a font of spirituality and solemnity. But only rarely is rhetoric merely rhetoric. Quite often the Bible carries a much more substantive load, working to undergird particular policy proposals or espouse political ideals. Thus, when in his first inaugural address Barack Obama called on the nation to reject the pettiness of partisan rancor, he used 1 Corinthians 13:11—“the time has come to set aside childish things”—to buttress his vision of national unity. Apparently Republican members of congress were sleeping through this part of the speech.

With the specter of the Great Depression looming large over his first and second inaugurations, Franklin D. Roosevelt drew from the story of Jesus’ cleansing of the Temple in the New Testament Gospels to liken corrupt bankers to “unscrupulous money changers.” Like Jesus, Roosevelt confronts these corrupt moneychangers, and like Jesus he is chasing them “from their high seats in the temple.” The rhetorical punch here is rather striking: Roosevelt, armed with a host of New Deal policy proposals that would regulate banking and lending institutions and Wall Street, that would address poor labor conditions and wages, etc., is a 20th century Jesus cleansing the Temple of the U.S. and restoring it to its ancient glory.

What’s particularly interesting about the story of the inaugural Bible is the way in which this anthology of ancient literature, containing a cacophony of voices from distant civilizations, can so easily be adapted to a wide range of modern issues. This corpus of literature works to decry partisan politics, to inspire national service, to regulate financial institutions, to address climate change, to spread Democracy, to oppose Communism, to justify marriage equality, to rationalize the institution of slavery, to legitimize a civil war, ad infinitum.

This is, in short, a remarkably flexible, malleable, collection of documents that is quite adaptable to any number of ideologies or political positions. Whatever these documents were in ancient times, they can readily become something else in later times. This can be a Federalist Bible, a Whig Bible, an Abolitionist Bible, a Slaver Bible, a Libertarian Bible. When in his first inaugural address George W. Bush co-opted the Good Samaritan story to support the shift of responsibility for social welfare from government to faith-based institutions, he was reading from a compassionate conservative Bible. When Barack Obama in his second inaugural address used the creation story in Genesis 1 to reinforce a vision for responsible environmental policies and for equality of “our gay brothers and sisters,” he was reading from a progressive Bible.

Or to put it in terms that my Harry Potter loving kids could understand, the Bible is a bit like a shape-shifting Boggart, only instead of manifesting in the form of one’s deepest fears it takes on the shape of one’s deepest desires or beliefs.

Which brings us back to the imminent inauguration of our 45th president.

While a number of former presidents, and not a few celebrities, are avoiding this inauguration like the plague, there can be no doubt that the Bible, or perhaps multiple Bibles, will be there front and center. We know that New York’s Cardinal Timothy Dolan has agreed to give a reading from the Bible at some point during the inauguration ceremony. And Mr. Trump has repeatedly told us that he loves the Bible. “It is the book, it is the thing,” his “favorite book of all time,” even greater than The Art of a Deal, which is “a deep, deep second to the Bible. The Bible blows it away. There’s nothing like the Bible.” We can certainly be assured that Trump will take the oath of office on a copy of the Holy Writ. Whether he also includes a copy of his second favorite book in the ceremony remains to be seen.

But what about the inaugural speech? Will Trump use this opportunity to establish his biblical bona fides?

If so, let’s hope he has a team of competent speechwriters hard at work. Because if this interminably long campaign season has taught us anything, it’s that Donald Trump is woefully bad at Bible-speak. Think Joey Tribbiani trying to speak French. His few bumbling efforts to go biblical on the campaign trail were painful to say the least. “Two Corinthians, right? Two Corinthians 3:17. That’s the whole ballgame. Where the spirit of the Lord, right? Where the spirit of the Lord is, there is liberty. And here there is Liberty College, but Liberty University, but it is so true. You know, when you think—and that’s really—is that the one? Is that the one you like?” Awkward. Cringe-inducing. Pious pandering at its worst.

I suspect, however, that Mr. Trump will approach the inaugural microphone with a fully loaded teleprompter. And should the Bible make its way into his speech, it will very likely become the Bible that Trump, or his speechwriters, want. Build a wall? “So the wall was completed…. When all our enemies heard about this, all the surrounding nations were afraid” (Nehemiah 6:15–16). Illegal immigration? “Then the LORD will drive out these nations before you” (Deuteronomy 11:23). Law-and-order from sea to shining sea? “Submit yourselves to every authority instituted among men: whether to king, as the supreme authority, or to governors, who are sent by him to punish those who do wrong” (1 Peter 2:13–14). That’s the beauty of proof-texting the Bible; the possibilities truly are limitless.

Which is why I’d like to offer my own suggestions for Mr. Trump. Personally I think Exodus 22:21 has a nice ring to it: “Do not mistreat or oppress a foreigner living among you.” Leviticus 19:34 might also fit nicely into a discussion of immigration: “The foreigner living with you must be treated as one of your native-born. Love the foreigner as yourself.” Or perhaps Leviticus 23:22 can appear somewhere in comments on the importance of a social safety net: “When you reap the harvest of your land, do not reap to the very edges of your field or gather the gleanings of your harvest. Leave them for the poor and the foreigner.” Or maybe Jesus’ words in Luke 18:22 could inform a discussion of fiscal matters: “Sell everything that you have and give to the poor, and you will have treasure in heaven.”

Or perhaps the best strategy is to simply avoid pious posturing altogether. After all, Jesus also said, “Beware of practicing your piety before others in order to be seen by them; for then you have no reward from your Father in heaven” (Matthew 6:1).