Why We Need a Crash Course in the 25th Amendment 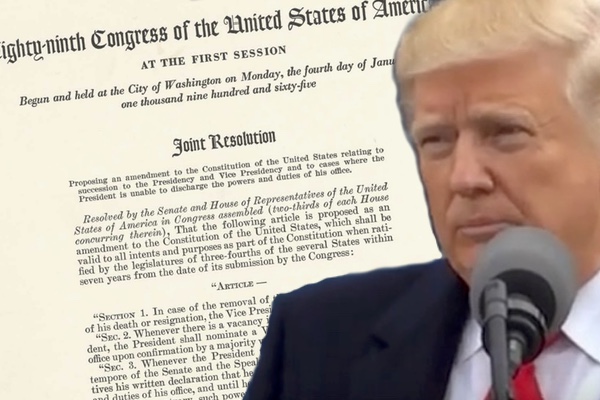 Keith Olbermann has said it. Michael Moore has said it. Many intelligent, perceptive people across the political horizon have said it.

America is about to inaugurate a person who not only lost 54 percent of the popular vote, but also has gloated over his “landslide” victory. Donald Trump is demonstrating by his tweets and by his constant narcissistic behavior – his refusal to accept the truth that Russian dictator Vladimir Putin is manipulating him by the use of flattery, his indifference to the national security information provided by 17 intelligence agencies, among other examples – that he is a dire threat to America and its future. Clearly, Donald Trump is displaying evidence that he is mentally unbalanced and unhinged. Many psychologists have said he fits the textbook definition of a psychopath.

This means that America is faced with its greatest constitutional crisis since Richard Nixon and Watergate. In many ways Donald Trump, with his pure ignorance, adolescent behavior and lack of experience, is a greater threat to America than Richard Nixon ever was. This crisis will escalate once Trump is inaugurated as he sets out to destroy the foundations of American foreign policy and lets loose an attack on basic domestic policy norms in areas including civil liberties, civil rights, the environment, labor rights, women’s rights, health care, and education, not to mention racial, religious and ethnic tolerance. Additionally, he is showing a total inability to use diplomacy and tact in his dealings with others. Instead, he employs insults and name calling, which is a danger to domestic harmony and foreign stability. He seems, clearly, to be living in a parallel universe, out of touch with reality, and obsessed with his own vanity.

Fortunately, there is a constitutional remedy: The 25th Amendment to the Constitution, Section 4.

The 25th Amendment was approved after the assassination of President John F. Kennedy. People were concerned that the new President, Lyndon B. Johnson, who had suffered a severe heart attack in 1955, might die in office, leaving the succession to the presidency in the hands of the 73 year old Speaker of the House, John W. McCormack of Massachusetts, or possibly 86 year old Senate President Pro Tempore, Carl Hayden of Arizona. The recent revelation by a Secret Service agent that Johnson was endangered by a possible shooting outside the Vice Presidential home by a nervous Secret Service agent on the night of November 22, 1963, only added to the crisis atmosphere at the time of the Kennedy assassination.

So in 1965, Senator Birch Bayh of Indiana and New York Congressman Emanuel Celler cosponsored what came to be the 25th Amendment, something that should have been passed decades earlier, after Woodrow Wilson suffered a severe stroke in the fall of 1919, and was heavily incapacitated for the remaining one and a half years of his Presidency, with Vice President Thomas Marshall not kept in the loop during those crucial 18 months. But nothing was done until the Kennedy death finally spurred action a half century later.

The 25th Amendment allowed for the replacement of the Vice President if that office fell vacant, and under this amendment, we have had two appointed Vice Presidents—Gerald Ford and Nelson Rockefeller—approved by both houses of Congress in 1973 and 1974 respectively, both occurring due to the Watergate Scandal and the resignations of Vice President Spiro Agnew and President Richard Nixon.

The provision in the 25th Amendment for an “Acting President” has been invoked under President Ronald Reagan in 1985, and under President George W. Bush twice in 2002 and 2007. In the case of Reagan, it was for cancer surgery after a colonoscopy, and in the case of Bush for twice undergoing colonoscopies. Therefore, power was handed over to Vice President George H. W. Bush and Vice President Dick Cheney, respectively, giving each of them temporary Presidential authority for a period of hours. However when Ronald Reagan was shot by John Hinckley on March 30, 1981, the 25th Amendment was NOT invoked. It clearly should have been.

In 1987, due to concern that Reagan might have lost his mental acuity, a group of Reagan staffers, led by Chief of Staff Howard Baker, arranged a meeting with Reagan, to settle questions that some had raised about his mental acuity. They came away convinced that Reagan was in fine mental shape. This was the only time a president’s ability to perform the tasks of his office was reviewed since the passage of the 25th Amendment, which provides a remedy.

Under Section 4 of the 25th Amendment the Vice President and the cabinet can take action if they believe the President is incapable of fulfilling his duties. There would be consultation with Congressional leaders in case of such an event, with the Speaker of the House, Paul Ryan, being the highest ranking constitutional officer in the line of Presidential succession, after Vice President Mike Pence. The question is whether Pence, wanting to remain loyal to the President, and so far defending everything Donald Trump has said and done, at least in public, could be persuaded that the nation was in danger, and that action needed to be taken to make Pence “Acting President.” He would remain Acting President unless the House decided to impeach Trump and the Senate convicted him. Ryan is clearly more uncomfortable with Trump than Pence, though he has evidently tried very hard to remain optimistic and loyal.

This seems in many ways to form the basis of a thriller political novel, but it is clearly a very worrisome situation in the minds of many foreign policy and intelligence experts. It would take a lot of political courage and conviction for Pence and Ryan and the cabinet officers to agree that Donald Trump is unfit to be President, and for them to be convinced that Trump is so dangerous he shouldn’t have access to the nuclear codes or continue as Commander in Chief. This is a situation that must be monitored and evaluated on an ongoing basis. The fate of the nation depends on our political leaders exercising good judgment.