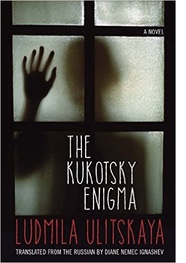 Leo Tolstoy once criticized historians for concentrating too much on just government actions and neglecting the people’s everyday life. In our own day, however, many historians treat common people, their work and culture much more thoroughly than most historians did in Tolstoy’s time.

Nevertheless, novels, including Ulitskaya’s The Kukotsky Enigma, can be an important aid in helping us better understand the past, especially people’s everyday lives. In an earlier review of her The Big Green Tent, which deals with the post-Stalinist Soviet period, I wrote of its “significant and intertwined historical and literary value.” The same is true for the Kukotsky novel, which deals mainly with the 1950s and 1960s. Although its English translation has just recently appeared, its Russian original came out at the beginning of the present century and won the 2001 Russian Booker Prize. In 2005 it also served as the basis of a 12-part Russian television series.

Although her first piece of fiction was not published until 1990, when she was in her late forties, Ulitskaya has since become the author of over a dozen books of fiction (including short story collections), some children’s stories, and a half dozen plays. According to a 2014 article by Masha Gessen in the New Yorker, “In Russia, Ulitskaya’s books sell ten times as many copies as any other literary fiction.” In addition, there are many translations of her works, and she is widely read in various other countries such as Germany and France. Gessen also mentions Ulitskaya’s criticism of various aspects of the Putin government.

She was born in 1943 of ethnic Jewish parents in the Russian Ural Mountains region, and much of her fiction reflects her own personal experiences—she is especially good at depicting the byt (everyday life) of her characters. According to one scholar, in the period depicted in The Kukotsky Enigma many people withdrew their “energy, emotions, and interests” from “activity controlled by the socialist state” to their own private realm.

The private life that Ulitskaya depicts is centered around the family of Pavel Alekseevich Kukotsky and their friends. He is a gynecologist who marries a younger patient named Elena after she believes her first husband is killed during World War II. Elena’s daughter, Tanya, another adopted girl, Toma, and the family servant, Vasilisa, are three other important characters, as is Pavel’s friend the geneticist Ilya Goldberg and his twin sons, who later become romantically involved with Tanya. Toward the end of the novel, Tanya’s daughter, Zhenya, gives birth to a son, and Ilya Goldberg with his second wife, Valentina, and one of his twin sons live in the United States.

Although most of the novel occurs in later years, a small part of it is set during World War II (the Soviet’s “Great Patriotic War”) and the half decade which follows, as well as some earlier background information. Pavel’s father, for example, had been not only a doctor, but for a while a medical officer in the tsarist army. Elena’s father, after 1905, became a follower of the ideas of Tolstoy and “organized Tolstoyan farm collectives in various regions.” (87) Other mentions of pre-World War I events include that of the very religious Vasilisa becoming a servant of an Orthodox abbess—following the 1917 communist revolution, she accompanied the abbess into exile for over a decade to a northwestern Russian region.

The author also briefly writes of the fate of the Tolstoyans and some others under the new regime. In a passage that indicates the fate of intellectuals and hints at the later limited housing conditions she sometimes describes, Ulitskaya writes: “In early 1920 the Kukotskys’ living space was ‘consolidated’: three more families were moved into their apartment. . . . The university professoriate, surviving the best it could under the new regime, could do nothing to help. They too had been reduced to tight quarters, and the scare of the revolution had not passed: the Bolsheviks had already demonstrated that the human life these putrefied intellectuals fought to preserve was not worth a kopeck.” (p. 6) (In Moscow during Stalin’s final years most residents still lived in overcrowded communal apartments.)

Government intrusions into people’s lives do not dominate the novel, but often lurk, directly or indirectly, in the background. Elena’s parents “had perished in the camps.” (19) Prior to WWII, Pavel contemplates “the fates of those close to him, [and] he realized that almost all of them also had been crippled by fear. The majority concealed some unsavory fact about their family’s origin or background or, if unable to hide it, lived in constant anticipation of being punished for crimes they had not committed.” (18)

Pavel is opposed to the law which made abortions illegal from 1936 to 1955. (In 1934, there had been 2 to 3 abortions for every birth in Moscow’s hospitals and clinics, and birth rates were declining. Despite unavailable contraceptives and crowded living quarters which influenced many women to choose abortions, Stalin forced the ban upon the Soviet people.) In explaining Pavel’s opposition, Ulitskaya writes, “nearly half of all emergency operations were the consequences of underground abortions.” (23)

Pavel’s friend, the outspoken and colorful Ilya Goldberg is “a Jewish Don Quixote who always managed to get sentenced for something other than what he was guilty of.” (42) And this occurs both under Stalin and Khrushchev. Besides serving prison and exile terms, Goldberg was once sent to a psychiatric hospital for criticizing Stalin’s favorite scientist, T. D. Lysenko, who claimed that environmentally changed plants could pass on their acquired characteristics. Stalin made him president of the Academy of Agricultural Scientists. He helped purge some of the more reputable geneticists, and his destructive influence set back Soviet genetics for several decades.

In addition to Goldberg’s encounters with the police, Ulitskaya also mentions various dealings of him and Pavel with Soviet bureaucrats and authorities, who usually come off looking poorly. A “convinced Darwinist,” Goldberg even comes up with a theory that from 1917 to 1956 Soviet politics “had exerted a negative influence on the evolutionary process” in that many of the most capable and boldest perished in the Leninist and Stalinist prisons and camps, as well as wars, while a higher percentage of toadies and careerists survived. (274-77, 282-83)

Like some of the characters in Boris Pasternak’s great novel Doctor Zhivago, Pavel hopes “that after the war [WWII] everything would change, improve, be more just.” (16) But Stalin’s oppressiveness continued in the postwar years. Ulitskaya notes, for example, the effect on Pavel of the so-called “Doctors’ Plot” of January 1953, when certain Jewish doctors were falsely accused of belonging to a conspiratorial international Jewish organization. He “realized from the outset that all doctors down to the very last one were being corralled into . . . shameful accusations” against Jewish doctors, and many “people refused treatment” from them. (114-15)

In these circumstances, Pavel “went on another drinking binge.” (113) Ulitskaya had already explained that he had discovered that this was the best excuse for not showing up to work when he might be forced to denounce someone. “No single other vice elicits nearly as much compassion in our country as alcoholism. Everybody drinks: tsars, archbishops, academicians, even trained parrots.” (53)

Pavel’s drinking also arises from personal and family problems, which Ulitskaya is more interested in depicting. When he announced to Elena and Vasilisa that he believed that abortion should be legalized, they were both offended. Elena said, “No, no, I’ll never go along with it. It’s legalized infanticide.” (61) The results of their disagreement were momentous. “Their family happiness . . . came crashing down in an instant.” (62) Thus, at the time of the “Doctor’s Plot” he was still troubled by the chasm that had developed and widened with Elena, and he even thought of suicide.

Besides alcohol, Pavel also turns to reading history for solace. “As the years passed . . . [he] found more and more sense in reading the ancient historians.” He states, “It's the only thing that allows me to tolerate today's newspapers.” (146)

Stalin’s death in March 1953, which apparently saved Soviet Jews from a worsening fate, produced great anxiety in some people like Vasilisa—she asks, “What’s going to happen now?” (118) Tanya and Toma are among the thousands who get caught up in the crushing street chaos on the day of the planned funeral procession. Later significant political events are ignored or mentioned only briefly. For example, “Khrushchev's fall [1964], which had occurred while Goldberg was doing his last term in prison, interested him only insofar as it signified the final defeat of Lysenko and his henchmen,” who had set back Soviet genetics. (370)

As the novel continues, an increasing focus is on Tanya, including her schooling. Into her early twenties, Tanya pleases her parents and follows her father’s fondness for science by studying and then working in biology. But then she experiences a crisis that ends her “romance with science.” (157) “Now instead of this heroic picture she saw a trap, and science seemed as much an idol as that wretched imposed socialism. . . .Now she had discovered a new dimension: ‘the obedient’ and ‘the disobedient.’ (256) And she now thinks of herself as a “very, very free person.” (264) Later on Ulitskaya comments on “her protestant thirst for the truth, which in practice played out as protest against any kind of falsehood, be it official or everyday.” (342)

Throughout the novel we constantly witness the everyday life of Soviet people, primarily in Moscow, but also to a lesser extent in Leningrad (St. Petersburg), and two Black Sea cities that Tanya visits, Yalta and Odessa. There are subways and trams, bathhouses and dachas, crowded apartments and poor maintenance, drunkenness and one shocking case of medical incompetence, and shortages and long lines—in the 1970s the average woman spent about two hours a day, seven days a week, making purchases. Ulitskaya also mentions various writers important to many Russians, such as Pushkin, Tolstoy, Dostoevsky, Pasternak, and the poet Joseph Brodsky. Tanya becomes familiar with homeless and bohemian people and comes to live with a jazz-playing saxophonist and becomes a jazz devotee.

Conversations between Pavel and his friend Ilya Goldberg reflect how seriously many Russian intellectuals of the period took ideas. On one occasion Ilya proclaims, “All moral foundations have been undermined.” (372) Like some of her predecessors such as Tolstoy, Dostoevsky, and Pasternak, Ulitskaya reflects Russian reality while also dealing with subjects of universal interest—abortion, love, personal communicating, marital relations, family, parenthood, religion, scientific versus other forms of knowledge, aging, sickness, and death. Of special interest is Elena’s memory loss: “My memory is getting worse and worse . . . . I constantly write notes to myself: don't forget this, don't forget that. Then I lose the notes.” (85) Her symptoms are akin to early-onset Alzheimer's, and Ulitskaya does a good job of depicting the extended effect of the disease on Elena and her family.

One long section of the novel (Part Two) may interest historians less than the remaining four-fifths because it describes an Elena dream of a series of events. The dream reflects Ulitskaya’s interest in both non-rational knowledge and in the magical realism style so significant in Latin America. Yet, there are still some passages worth noting, like a discussion with Tolstoy that reflects his critical attitude in old age toward his earlier writing and some of his thinking on love and sex.

In summary, historians of Russia will especially appreciate this book, but historians in general, as well as other readers, will discover much of value in this latest translated novel of one of Russia’s greatest living writers.