The Grim, Awful Vision of the City of the Future

Carl Abbott, Portland State University, Emeritus, is the author of Imagining Urban Futures: Cities in Science Fiction and What We Might Learn from Them (Wesleyan University Press, 2016)

It’s a scholarly cliché that Americans have a visceral dislike of cities. We relish the destruction of New York and Los Angeles in older films like When Worlds Collide and newer versions like Independence Day. We consume novels in which thermonuclear bombs (Pat Frank’s Alas, Babylon) or plagues (Stephen King’s The Stand) destroy places like Miami and New York and offer opportunities for heroic individuals to make new lives in small towns and rural refuges far from dangerous and contaminated cities. 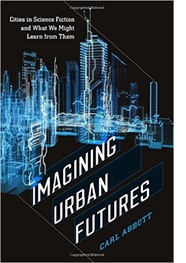 Cities have been careening toward imagined collapse for more than a century, as soon as people began to contemplate the effects of massive industrialization on the towns of Britain, Europe, and the United States. There has been a deep fear that internal problems and urban contradictions will create an unmanageable crisis that pushes overgrown cities toward more and more desperate situations and then, perhaps, to social chaos.

Different generations of speculative writers have had their favorite threats to urban survival, reflecting dominant worries among contemporary intellectuals and politicians of their era. In succession from the later nineteenth century to the twenty-first, I term these the perils of fire, famine, and flood. In less metaphorical terms, they are the possibility of class warfare and revolution, the hazards of overpopulation, and the menace of environmental upheaval. In each case, cities create their own crises—through the polarization of wealth and the exploitation of the working class, through uncontrolled growth that stresses the city’s physical and social systems, or through overconsumption that ruins the planet through climate change.

Jack London’s The Iron Heel (1908) exemplifies the fears of cities as sources of working class revolution. He depicts a future United States in which corporate fascism creates a divided society of managers living in gated suburbs and workers crowded into urban ghettos under the “Iron Heel” of the Oligarchy. The story draws on the author’s experience of the working class miseries of East London that he documented in People of the Abyss (1903) and transposes it to Chicago. The inordinate growth of the industrial city creates abject poverty that seeds an abortive revolution. Workers of the Chicago Commune rise prematurely in revolt, only to be ground to dust, destroyed by machine-gun armed mercenaries who herd them toward Lake Michigan and slaughter them by the tens of thousands. 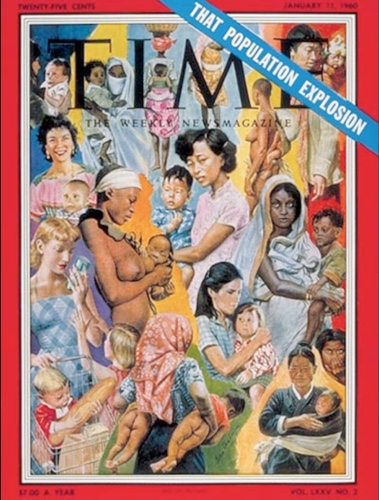 Fifty years later, postwar Americans no longer anticipated a socialist revolution, but they did fear the effects of a global population explosion (the subject for Time magazine’s January 11, 1960 cover story). A common theme for speculative fiction in the 1950s and 1960s is a Malthusian future in which cities become too crowded to be livable. This is Manhattan in Harry Harrison’s Make Room! Make Room!, a 1966 novel set in 1999 when the world’s greatest city has reached 35 million. There is no elbow room on the crowded streets and none in overcrowded apartments. People huddle in the doorways and under expressway pillars, squat in tenement stairways, and live in villages of derelict cars crowded unto old parking lots. They eat weed crackers made from algae and seaweed, supplemented by especially luxurious soylent steaks.

Hollywood transformed Harrison’s novel into Soylent Green in 1973. The year is now 2022 and New York’s population 40 million. Along with bang-up action, the film retains the book’s sense of claustrophobic poverty. A shop for the elite sells pitifully small amounts of fresh food from behind locked screens. Commoners wear uniformly drab clothes, sleep on stairways, and riot over food. At the climax, Charleton Heston follows the body of a friend to a waste disposal site that turns out to be a food factory. As tens of millions of movie-goers know, soylent green is not made from plankton but from reprocessed corpses in a ghoulish cycle of sustainability—“It’s people. Soylent green is made out of people!”

In the twenty-first century, fears of overpopulation have receded, to be replaced by deep worry over climate change. Again, cities carry the seeds of their own destruction. As the centers and drivers of a wasteful global economy, they spew the carbon dioxide that undermines the delicate climatic balance—a process whose urban consequences are compellingly imagined by Paolo Bacigalupi in The Water Knife (2015). The action centers in Phoenix, overwhelmed by climate refugees from Texas and itself deprived of water by greedy Las Vegas and Los Angeles. Phoenix is literally drying up. Poor people crowd around public water taps and squat in abandoned houses. Unofficial militias patrol the Nevada side of the Colorado River, killing any Zoners (Arizonans) and Texas refugees who try to escape Phoenix’s downward spiral. Water mafias have taken over the earlier eco-niche of Mexican drug cartels , and the story ends with open warfare between Zoners and Texans, with the city left to suffer from the sins of its deluded boosters who tried to outbuild the desert.

One consistent theme runs through all of these variations, distressing though it is to those of us who value cities. They are tragedies in the formal sense, stories in which the city is the protagonist that grows so rich, so proud, and so wasteful that it sets in motion the events that will carry it toward crisis and destruction. Cities are not going to go away, but readers who may be around to sample speculative fiction in the 2030s and 2040s can expect new variations—maybe “smart city” grids that seize power for themselves… or bioengineered sewage sludge that takes on a life of its own . . . or even the robot rebellion that Karel Čapek predicted a century ago, triggered when restrictions on immigration force the urban upper class to exploit androids rather than people. Take your pick and start planning your best seller.