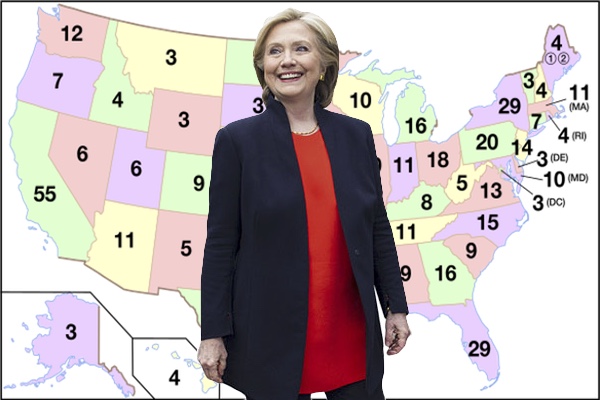 It will be Hillary with a rock solid Electoral College majority (352 to 186). Here are the states she’ll win.

On May 1, this author published his preliminary assessment of the likely Electoral College results in the upcoming Presidential Election Of 2016. Now, six months later, I would like to update this projection, with the hope it will be as successful as what I projected in 2012 on my blog, The Progressive Professor. Separate and independent from Nate Silver, who became famous for his predictions, I projected exactly the same result, which was correct, that Barack Obama would win 332 electoral votes and Mitt Romney 206 electoral votes. Also, in 2008 on my blog, I projected a final total of 364-174, when the final result was 365-173, with the only error, causing to be off one electoral vote, was my projection that Missouri (10) would go for Obama, and Indiana (11) would vote for John McCain, and instead the opposite occurred, changing electoral votes by just one. Let us see how correct the projections are this round.

This author’s projection has certainly changed as a result of events and controversies, and the growing evidence that Hillary Clinton should do better than originally predicted in May. Despite many issues with Hillary Clinton, it seems quite clear that Donald Trump has self destructed in many ways; and that Gary Johnson has declined in the extent of his public support in polls, and this all changes the likely results on Election Day. On the other hand, the controversies over Hillary Clinton’s emails, newly revived by FBI Director James Comey, and the Wikileaks information about the Clinton Foundation and Clinton staff emails, further complicates the election, making it the most unpredictable and mercurial election cycle in memory.

So how would I change my projection, section by section of the nation?

New England—As stated in May, Hillary Clinton will win all six New England states—Maine, Vermont, New Hampshire, Massachusetts, Connecticut, Rhode Island—but with Gary Johnson likely to have his best performance in New Hampshire, possibly more than 10 percent of all votes cast, taking away any possibility that Donald Trump might snare this one “swing” state in this area of the nation. However, one electoral vote in the northern, more rural part of Maine, one of the two states that allow a split electoral vote, is likely to go to Donald Trump.

Middle Atlantic—I now repudiate my earlier thought that Donald Trump might have a chance to win New York, because of his being a resident his whole life in the Empire State, and that changes the Electoral College by 29 electoral votes. Also, while some observers have claimed that Pennsylvania would be in play, it seems clear that Trump will not win that state, nor New Jersey, Maryland, Delaware, or the District of Columbia, so a complete sweep of these “Blue” states since 1992 will occur for a seventh straight time.

South—This area had Virginia and Florida as “swing” states that were Democratic in 2008 and 2012, and predicted to go the same, and that estimate still holds. But also, North Carolina, as stated in the May 1 article, can now be seen as likely Democratic. But Georgia, thought to be swinging to the Democrats, and seen as competitive, now seems less likely to do so. So three states—Virginia, Florida, and North Carolina should be in the Clinton column. Georgia will join South Carolina, Alabama, Mississippi, Arkansas, Louisiana, Tennessee, West Virginia, Kentucky, as well as Texas in remaining Republican. The Lone Star state is moving in the next four to eight years to the Democrats, but not in 2016, although some polls show the Trump lead only a few points over Clinton. So with Georgia reverting to the Republican camp, subtract 16 electoral votes from the Democratic column.

Midwest and Great Plains—As I stated in May, the six time “Blue” states of Illinois, Michigan, Wisconsin, and Minnesota will do it for the seventh time, and be joined by “swing” state Ohio (the most crucial state for Republicans historically), repeating what happened in the two Obama elections. But Iowa will, in the author’s estimate, go back to the Republicans, so 6 electoral votes must be subtracted from the estimate in May. Indiana (with Mike Pence running for Vice President); Missouri (usually a “bellwether” but moving away from that recently); and the Great Plains states of North Dakota, South Dakota, Nebraska, Kansas and Oklahoma will remain reliably “Red” and back Trump, as stated in May. Some projections see Indiana and Missouri possibly going “Blue,” with Indiana having done so in the first Obama election, before reverting to the Republicans in 2012, and Missouri having been a “bellwether” state, going with the winner in every election except 1956 and 2008 (both times only about 4,000 votes margin for the loser of the election), and then, suddenly, going massively for Romney in 2012 against all history since 1900. With the growing trend toward Hillary Clinton in polls, both Indiana and Missouri could go to Clinton, but this author senses that while the election will be closer than 2012, Trump is likely to win both states in the end.

Mountain West—This is an area where it now seems possible that Arizona (more and more Hispanic) is likely to go “Blue” for this election, with Arizona trending toward that for certain in the future. But Utah, the heavily Mormon state, due to alienation from Donald Trump, seems competitive, with independent candidate Evan McMullin, who is from Utah and is a Mormon, having a chance to win the state and become the first non major party candidate to win a state’s electoral votes since George Wallace in 1968. But in the end Trump should win Utah with maybe 35 percent of the vote, the lowest percentage winner in any state. However, Colorado, New Mexico, and Nevada (all considered “swing” states but having voted twice for Obama) will, as projected, go to Hillary Clinton, while Idaho, Montana and Wyoming will be reliably “Red” and support Trump, as will Alaska. Also, expect that Gary Johnson will do respectably well in his home state of New Mexico, as he is likely to do in New Hampshire; but he has no chance to win a single state’s electoral votes. So overall, Clinton should win four of the nine states in this region, with a gain in Arizona at the end of the vote count, and its 11 electoral votes.

Pacific Coast—As I predicted in May, California, Oregon, Washington State, and Hawaii will remain reliably Democratic and support Hillary Clinton. There is no possibility of any of these four turning “Red.” California was lost to the Republicans once anti-immigrant legislation (later declared unconstitutional) passed into law under Governor Pete Wilson in 1994, but insuring that the largest electoral vote state would turn “Blue.” With 20 percent of the electoral vote needed to win the Presidency, the Republicans flubbed badly, and will have a difficult task in the future to win the White House without California.

So in conclusion, I am adding New York and Arizona to my states, including North Carolina, but eliminating Georgia and Iowa, which were among the states estimated to be on the Democratic side in my May estimate on the Electoral College. So the electoral vote, instead of 334-204 as in May, is now 40 more with New York and Arizona, but 22 less when subtracting Georgia and Iowa, so an additional 18 electoral votes over the May estimate.

Overall, the election will hand Hillary Clinton a very solid victory, with Donald Trump winning only the South, minus Virginia, Florida, and North Carolina (all won by Obama in 2008) and the more rural Midwest, Great Plains, and Mountain West. This is not a winning combination for the Republican Party’s future. Trump likely to have a lower percentage of the total national popular vote than John McCain or Mitt Romney.

And Hillary Clinton’s victory will propel the Democrats into control of the US Senate, with a projected gain of seats in Illinois, Indiana, Wisconsin, New Hampshire, Pennsylvania, and North Carolina at the least, making for a 6 seat gain to 52 seats, and possibly winning Arizona, Florida, and Missouri, so a maximum of 55 seats or a 9 seat gain. The House of Representatives will remain in Republican hands, but not by 30 seats, but more likely by 10-12 seats, so from a present total of 247-188 to 227-208 or 229-206.

It also seems clear that North Carolina, Georgia, and Arizona will trend “Blue” in future Presidential elections, as well as Texas a little later in time. If these four states do go in that direction from now on, it means, at the least, that the Democrats will be likely to retain control of the Presidency, with an Electoral College total of 407 electoral votes (with Texas having 38 electoral votes), if not more than that total in the future. And this is before California, Texas, Florida, and Arizona gain more seats in the House of Representatives and in the Electoral College, due to population growth, after reapportionment in 2022.