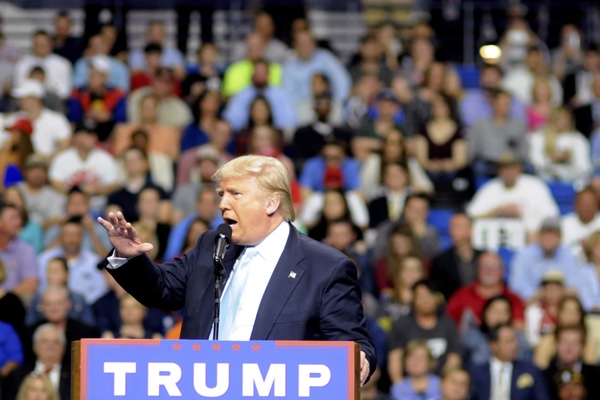 I recently wrote in the New York Times that with Presidential election now underway, the 2016 election cycle represents a high water mark for the modern political era in terms of disillusion with our government and our democratic system. Anxiety, public outrage, and disgust over the intense focus and interest on the candidate’s personalities over substantive policy issues and leadership ability is widely shared across the political spectrum and numerous people have publicly proclaimed that they are interested in moving to Canada depending on the winner of the Presidency! While those in the Millennials and Homeland Generations have never seen anything like this, older generations lived through more quiet periods of political change, but that now seems like ancient history.

When concessions speeches are made, victors are announced, the agony and ecstasy of this election finally ends, the central question will be: “Will anything be different?” Will all of this rancor have any impact on how we play the seemingly polarized political game?

My answer is: “Yes, 2016 has been a transformational election.”

The real losers of this election cycle – no matter which candidate wins the election – are the two major political parties. Thanks to two powerful, populist insurgencies (Sanders on the left and Trump on the right) that have humbled the old partisan power elite, the Democratic and Republican political parties will be forced to move to the center to widen their appeal in the next election cycle, which will mark the end of 24 years of the two parties’ gradual drift toward their respective outlying fringes.

Looking at 2016 in historical perspective, ever since Newt Gingrich began pushing the Republican Party to the far right after 1992, the United States has been in an era of incredible electoral instability. Presidential victories have been razor thin, and partisan control in Congress and in the White House has flipped back and forth with regularity. Today, most Americans do not feel that the two major political parties represent them, with more Americans identifying as “independent” than ever before. Meanwhile, the political class has become increasingly out of touch with the center, focused on pandering to the core base of party loyalists to win primary elections.

2016 is different for other reasons as well. In fact, it may well be the most consequential election in generations because new forms of mobilization and organization have dramatically shifted the balance of political power in the electorate, and the “era of indecision” that the US has been experiencing for the past 24 years – 24 years of power swinging back and forth between the parties in one narrow victory after another – may finally be coming to a heated conclusion. The unexpected success of Donald Trump and Bernie Sanders in shaking up their respective parties may – finally – break the logjam of polarization between the two parties.

To see why things are different this time, we need to briefly look at some history and how the parties controlled our national institutions in earlier times. From 1896 through 1930 and the end of the Hoover administration, the GOP comfortably controlled the White House and both Houses of Congress for 13 of 18 electoral cycles. After the Great Depression, party control flipped and the Democrats controlled all three electoral institutions through 9 of 11 elections. After the 1952 elections and during the Eisenhower administration, the US entered a period of stable, predictable divided government where the Republicans controlled the White House in most elections, while the Democrats held majorities in the houses of Congress for four straight decades.

1992 marked the end of almost a century of relative stability, and the beginning of our current era, which has been marked by no clear pattern of party control of any national institution over the past 24 years. Looking back at the 12 national elections between 1992 and 2014, power has bounced back and forth from one party to the other, with neither party winning by huge margins. In fact, during this 24 year period, there have been six different configurations of party control in Washington (looking at the mix of party control of the Presidency, the House and the Senate); the last time we saw a similar pattern of instability was the late 1800s.

The explanation for these narrow victories over the past 24 years is that our political parties have ideologically sorted since 1992. In their efforts to appease their core loyalists, the parties have become increasingly homogeneous and more ideologically distinct from each other. In the process, they have pushed out those members who do not have uniformly extreme liberal or conservative views. Then, when one party wins an election by a narrow margin, those hard-core partisans who come to power regularly over-reach by pushing through narrow, divisive agendas involving issues like abortion or health care. Parties are now focused on their narrow bases of extreme loyalists, rather than attempting to build large coalitions that work for the population as a whole.

Two figures powerfully reveal these shifts since 1992. The first shows that Americans correctly see that the two political parties have become more distinct. The American National Election studies has been asking the question, “Do you think there are any important differences in what the Republicans and Democrats stand for?" for over 60 years. Those responses which are “Yes” are plotted and there is sharp climb since the 1970s and an even sharper spike since 1992 which by 2012, almost 80% of Americans saw major differences in the political parties. The second figure presents a historical picture of partisan change over time with those who identify as Democrats on the decline since the end of the Kennedy era and a recent decline of GOP identifiers. Now, the plurality of Americans identify as Independents and they have been the largest group going on a decade. 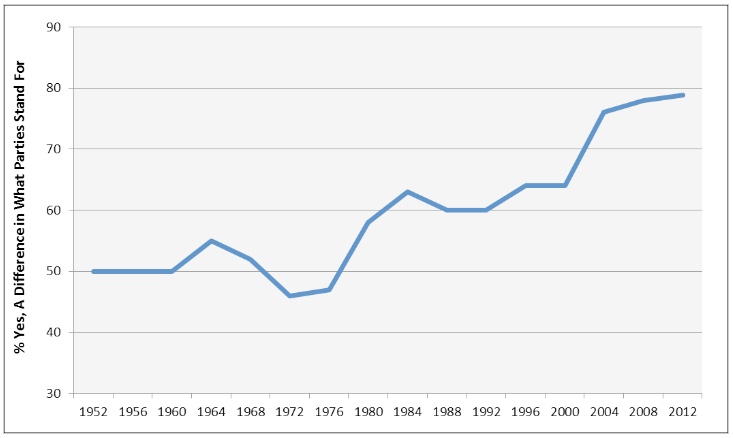 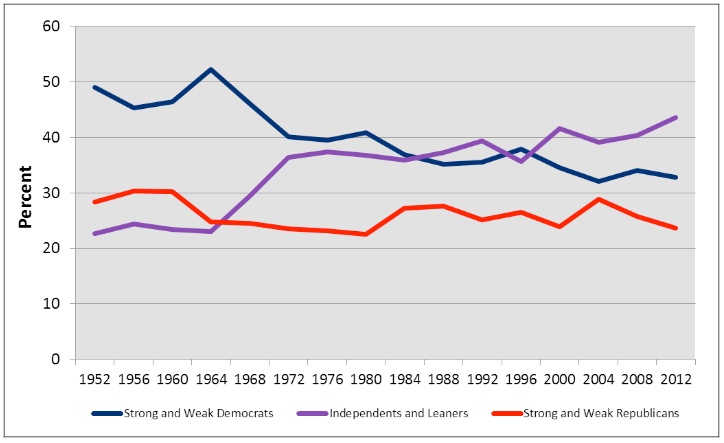 Source: ANES. Note: All data has been weighted and 2012 data is FTF Only

The Republicans and Democrats alike are both out of touch with the electorate at large. When polled in detail on various political topics, Americans are generally centrist and pragmatic – not exactly two words that come to mind when you think about today’s Republicans or Democrats. Gallup’s tracking poll of partisanship reveals that the country has turned away from the parties since 1992. In September of 2016 40 percent of Americans rejected a party label entirely, while 32 percent said they identified as Democrats and 27 percent identified as Republicans. This marks a notable shift since the early 1990s, when only about a third of Americans considered themselves “Independents.” So, despite talk of polarization and division, the “middle” has not disappeared – on the contrary, it has grown. Accordingly, the post-1992 status quo in politics is not working for most Americans; today, only 37 percent Americans believe that the two major parties do an adequate job representing the citizenry.

This year marks the nadir for the major American political parties. As the parties have each become more ideologically extreme and less appealing to voters since 1992, they opened the door for rebellious candidates such as Sanders and Trump to powerfully challenge the status quo from the outside. The recent rise of social media further enabled extreme candidates to organize, fundraise, and engage with voters, all without the support of the mainstream party leadership, toppling the existing party elite and reshaping the political narrative.

The 2016 insurgency on both extremes has already been an important turning point in political history and the genesis for a new political order. Trump took out dozens of well-funded and professional establishment candidates. Today, it is not even clear who runs the GOP or what the party represents. On the other side of the aisle, Sanders fought a Clinton machine well into the primary and revealed deep fractures and often unaddressed concerns within the Democratic Party. A little over a year ago, Trump and Sanders looked likely to be nothing more than asterisks in Presidential election history. Now they are both regularly featured on the front pages of newspapers and have changed the political discourse and the future direction of the parties entirely.

Even if the latest polls are completely right and Hillary Clinton trounces Donald Trump in a landslide victory this evening, the post-2016 political world will be vastly different. The nature of who wields power in the American polity has changed, as evidenced by the success of Sanders and Trump in disrupting their respective parties’ established order.

The American people are not happy on either side of the aisle (or in the middle!). Now that Sanders and Trump have revealed the dysfunction of both political parties, the parties will have to regroup and reconsider how they operate and who they represent. Our winner-takes-all system and Duverger’s Law makes it clear that two parties are the norm for the US to maintain political stability, but those parties will look very different from what we have known in earlier political epochs. The events of 2016 revealed that our parties are out of equilibrium and may be for some time. A new political order will eventually emerge putting an end to our era of indecision and narrow partisan victories, but it undoubtedly will take time and it will be messy.

Buckle up, it’s gonna be a bumpy ride.