Matthew E. Stanley is Assistant Professor of History at Albany State University in Albany, Georgia. His book, The Loyal West: Civil War and Reunion in Middle America, will be published in January 2017 by the University of Illinois Press. Stanley’s current research focuses on the convergence of collective memory and radical class politics among Civil War veterans. 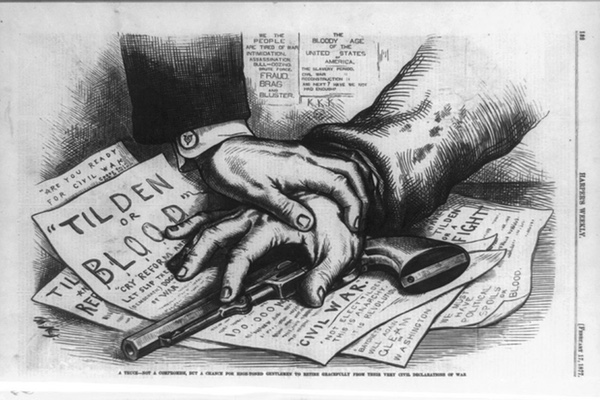 A truce - not a compromise, but a chance for high-toned gentlemen to retire gracefully from their very civil declarations of war. By Thomas Nast in Harper's Weekly, Feb. 17, 1877.

The aftermath of the 1876 presidential election saw an uncommon moment of electoral pandemonium. Coming after over a decade of white southern violence and terror against freedpeople in the post-emancipation South and within an era of hyper partisanship and soaring voter turnout, the contest that November turned on a razor thin electoral margin. Both presidential candidates refused to concede, and major figures and mass supporters in both parties rejected the others’ claims of fraud, bribery, and intimidation. Wild rumors swirled. Supporters of each side, many of them armed combat veterans of the Civil War, prepared, if prematurely and in exaggerated numbers, to safeguard the election of their candidate and protect by force what they saw as the integrity of the democratic process. 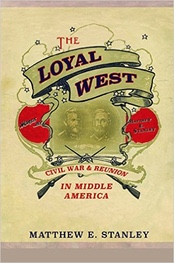 Now that we are nearing the climax of another tempestuous presidential cycle, albeit one that pales in comparison to the social violence and political divisions of Reconstruction, the past few weeks have seen two conspicuous and interrelated trends: a surge in armed militia groups, particularly in Texas, the Deep South, and the Midwest, as well as an ongoing attempt by Republican Party candidate Donald Trump to declare the United States presidential election invalid before the first votes are even cast, declaring it “rigged.” During the third presidential debate Trump once again hedged on whether or not the presidential election was fraudulent. When asked directly by moderator Chris Wallace if he would accept the outcome of November 8, Trump replied, “I will keep you in suspense.” In a speech on Thursday, Trump added, “I will totally accept the results of this great and historic presidential election if I win. Of course I would accept a clear election result, but I would reserve my right to contend or file a legal challenge, in the case of a questionable result.”

This intransigence squares with two broader trends in recent American politics. The first is the pitiable level of discourse rendered by the Republican candidate over the past sixteen months, characterized by a “paranoid style” of American politics that tends toward conspiracy theory, projection, and outright fantasy. Premeditated assertions of a “rigged” election square perfectly with this frenzied outlook.

The second trend is that, as data suggests, and despite rampant Islamophobia, our greatest domestic terrorist threat comes from ultraconservative and heavily armed white men whose organization flourished in response to the election of the first African American president. Indeed, the Department of Homeland Security, the FBI, the Police Executive Research Forum, and the Global Terrorism Database, among others, have all made clear that the most direct terror threat in the U.S. comes not from jihadists, but from right-wing extremists: white Christian nationalists, Neo-Nazis, Second Amendment militias, anti-government paramilitaries, and heavily armed “patriot” groups. These potential terrorists—who are white, English-speaking American citizens—remind us that, for all our “terrorphobia,” it’s worth remembering that here in America the Abdelhamid Abaaouds are outnumbered by the Dylann Roofs, Cliven Bundys, and Timothy McVeighs.

At first blush, this combination of hyper conspiracy and the call for popular resistance (even armed resistance) appears a potentially disastrous one, courting civil tumult if not constitutional crisis and bloodshed. It also draws natural comparison to a previous presidential election in which large numbers of American voters complained of fraud, challenging the honesty of the electoral process and the very legitimacy of the presidential office itself. I am referring not to the elections of 2000 or 1960, but to that of 1876.

Indeed, while the preemptive refusal of a presidential nominee and many of his followers to delegitimize a mutually agreed upon voting process weeks before the election takes place is somewhat unprecedented; the aftermath of 1876—its acts of noncompliance joined with allusions of violence—is the exception that proves the rule of a peaceful transfer of presidential power.

The fall of 1876 saw the most forcefully disputed presidential election in United States history in which both parties initially claimed victory and the electoral dust only settled after nearly four months of impasse. Although Samuel J. Tilden, the Democratic governor of New York, won the popular vote count over Republican and Ohio Governor Rutherford B. Hayes by more than a quarter of a million ballots, the final electoral tally hinged on the contested outcomes of four states. Both sides disputed the results, with Republicans in particular alleging (correctly) that they should have rightfully won South Carolina and Louisiana, which had African American majorities.

But Tilden’s hardline supporters did not surrender gently, at least not at the outset. Indeed, in an effort to fully invalidate Hayes, a former Union general, Tilden backers continued to charge Republicans with intimidation, coercion, and voter fraud. Vowing “Tilden or War,” impulsive Democrats, led by Louisville Bourbon newspaperman Henry Watterson and supported by several other party luminaries, including New York World editor Joseph Pulitzer, threatened a renewed civil war. Watterson himself vowed to march on Washington D.C. with 100,000 unarmed men. Pro-Tilden militias organized, pledging their support to their “unjustly” jettisoned presidential aspirant. Tilden “Minutemen” in the Midwest threatened to invade the capital and seat their candidate through the force of bayonets. As Ohio Democrat Allen G. Thurman proposed, “We can fight, we can back down, or we can arbitrate.” Meanwhile, some fretful Union veterans stood ready to don their aging uniforms and shoulder their arms once again in defense of the Republic.

Although President Ulysses S. Grant increased the military’s presence in the nation’s capital and vulnerable locales in the Deep South, even threatening martial law, bloodshed was thankfully averted. This was due in no small part because Tilden himself denounced all such schemes and insinuations as entirely insurrectionary, favoring instead a formal challenge to Hayes’s triumph. In the end, Tilden’s official claim was ignored, only a few isolated protests actually occurred, and, as historian Mark Wahlgren Summers explains, enraged Democrats who called for “Tilden or Blood” ultimately got neither.

Congress at long last determined the winner through the creation of an Electoral Commission (one in which Republicans enjoyed an 8-7 advantage), and Tilden lost by one electoral vote—the narrowest defeat in American history. Most Democrats were mollified by the Republicans’ implicit agreement to withdraw federal troops from the South (he in fact merely barracked them) and recognize white “Redeemer” Democratic rule in the former Confederacy in what became known ignominiously as the “Compromise of 1877.” As Tilden himself later clarified, “I can retire to public life with the consciousness that I shall receive from posterity the credit of having been elected to the highest position in the gift of the people, without any of the cares and responsibilities of the office.” Perhaps Trump will parlay a “greatest president who never served as president” aphorism into his ensuing television entertainment venture.

So, will this post-election moment produce a “Trump or Blood” scenario? Not likely, as Trump’s obstinateness on this matter surely says more about one man’s narcissism than either feasible political tactic or even sincere ideological opposition to Hillary Clinton. No, 2016 is not 1876. There is no equivalent in our own time of Reconstruction era violence or political division. There are no leading Republicans seeking to muster pro-Trump militias. Few GOP leaders (or Trump campaign insiders, for that matter) seem willing to endorse his fully unsubstantiated claims of election fraud (claims that are, by the way, legally irrelevant). The entire fraud narrative is less organic than a top-down creation of Trump himself. Most notably, with Clinton comfortably ahead in the polls, the results of this November 8 are unlikely to be a near run as those of November 7, 1876, rendering Trump’s claims of corruption all the more preposterous and his ethno nationalist fever dream all the more unlikely.

However, through Birtherism, Trump’s willingness to wield popular racial resentment to delegitimize a sitting president is well established. Trump has built on this racist groundwork by consistently shirking an issues-based discussion in favor of a punitive rhetoric that has far surpassed run-of-the-mill campaign mudslinging—rhetoric that has come to include threats to jail political opponents and musing about political assassination and the possible use of nuclear weapons. Now he is flouting one of the essential ingredients of democracy and, quite frankly, one of the more remarkable sociopolitical achievements in all of human history: the peaceable transition of power following a self-governing election. Such bombast and tactical recklessness, even as mere bluster or in the service of narrow self-interests, is rare if not wholly exceptional among major party presidential candidates, as even Tilden’s relatively tempered position within the bedlam of 1876 makes clear. Inside our nation’s current milieu of what appears to be an increasingly unconcealed white supremacy—an environment which Trump has done nearly everything within his power to foster—Trump’s defiant posturing based on utterly uncorroborated edicts has the uncommon potential to, at best, paint the rightful electoral victor as illegitimate, and, at worst, question and perhaps disrupt the democratic process altogether.