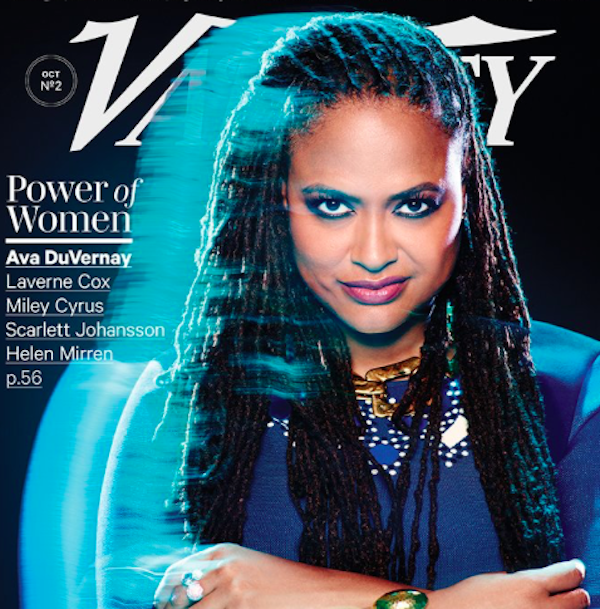 Ava DuVernay on How '13th' Reframes American History (Interview)
13th, out Friday on Netflix, compels viewers to sit upright, pay attention, and interrogate words in their most naked form as they’re analyzed and unpacked by DuVernay’s subjects, who include Angela Davis, Charles Rangel, and Henry Louis Gates. Sometimes the film confronts words in seemingly contradictory pairs: person/property, slave/freed person, labor force/prison workers. At other times it wrestles with oxymorons that target black Americans: truth in sentencing, war on drugs, tough on crime, law and order, minor crimes.
Premised as a historical survey that maps the genetic link between slavery and today’s prison-industrial complex, 13th explodes the “mythology of black criminality” as The New Yorker’s Jelani Cobb at one point in the film refers to the successive and successful measures undertaken by political authorities to disempower African Americans over the last three centuries. The academic and civil-rights advocate Michelle Alexander unpacks how the rhetorical war started by Richard Nixon and continued by Ronald Reagan escalated into a literal war, a “nearly genocidal” one. The Southern Strategy is unmasked as a political calculation that decimated black neighborhoods but won the southern white vote.
Ava DuVernay Reminds Us: The Past Must Be Present in Criminal Justice Reform
Her new documentary explains how the ‘slavery loophole’ perpetuates racial disparities in mass incarceration, says Khalil Gibran Muhammad
What abolition took away, the modern criminal justice system restored: a racialized system built in the South to economically exploit, socially contain, and politically control the black population in the name of law and order. The film traces what it calls a “slavery loophole” and its unparalleled, century-and-a-half of success in making America the greatest and wealthiest jailer in the world. The Brookings Institution estimated in 2014 that the entire prison industry is worth $80 billion dollars. That’s a whole lot of money and profits in the pockets of correctional employees, supply vendors, private employers of prison labor, and private prison contractors. Where else but “in the land of the free and the home of the brave” can so much freedom and income be subsidized by so many unfree. The film makes clear this seeming contradiction is no contradiction at all.
Annette Gordon-Reed:  “Hamilton” — the play — is sensational, but no substitute for history
Historian Annette Gordon-Reed would like to make clear that she likes “Hamilton,” the Broadway hip-hop musical phenomenon about Alexander Hamilton, which audiences and critics have adored and some scholars and writers have scorned.

“A Broadway show is not a documentary,” said Gordon-Reed, a history professor in the Faculty of Arts and Sciences who also holds the Charles Warren Professorship of American Legal History at Harvard Law School and the Carol K. Pforzheimer Professorship at the Radcliffe Institute for Advanced Study.

Hot Type: 150 Years of The Nation
Directed by two-time Academy Award winner Barbara Kopple, Hot Type: 150 Years of The Nation is a vivid look at one of America's oldest magazines. Centered through Editor and Publisher Katrina vanden Heuvel, as well as an illustrious array of passionate writers, the film is a journey into the soul of American Journalism. With unfettered access and unfiltered honesty, Hot Type captures the day-to-day pressures and challenges of publishing a weekly magazine and illuminates how the past continuously ripples through and shapes current events. It is the story of The Nation - and the nation - evolving into the future as it is guided by its remarkable past.
Featuring Rev. William Barber II, Bill Moyers, Rachel Maddow, Victor Navasky, Katrina vanden Heuvel, Ben Jealous, Amy Wilentz, Eric Alterman, Rick Perlstein, Betsy Reed, John Nichols, Richard Kim and many more. 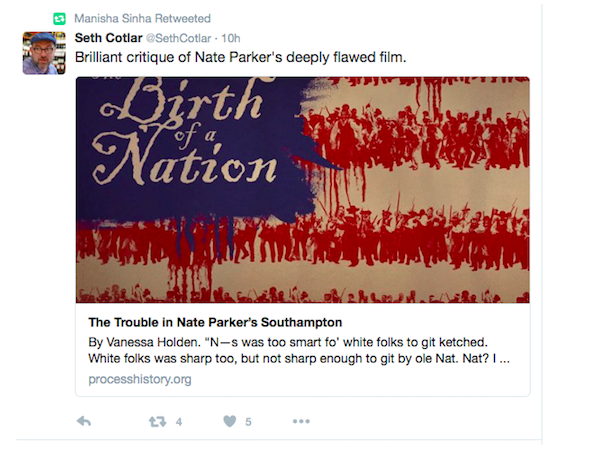 10 things Birth of a Nation got right about Nat Turner
On Sixty Minutes, when filmmaker Nate Parker was asked if Birth of a Nation was historically accurate, he noted, “There’s never been a film that was 100% historically accurate. That’s why they say based on a true story and doesn’t say, ‘A true story.’” Hollywood may not be the best place to learn one’s history, but here are ten things that the new movie Birth of a Nation got right about Nat Turner’s revolt:
1. Nat Turner was a literate slave. While most slaves were illiterate, Nat Turner could read. We do not know exactly how he learned to read. When he was recounting the story of his life, he saw it as a miracle that he learned to read without being taught, but Thomas R. Gray, the man who transcribed Turner’s confession, explained his literacy in the same way that Nate Parker did: he had been taught by his owners.
Another professor dislikes “The Birth of a Nation”
Dr. Leslie M. Alexander is a professor in the Department of African American and African Studies at The Ohio State University, where she specializes in 19th century Black culture and political consciousness.
Contrary to his promises of “historical fidelity,” Parker created a deeply flawed, historically inaccurate movie that exploits and distorts Nat Turner’s story and the history of slavery in America. Nearly everything in the movie—ranging from Turner’s relationship with his family, to his life as a slave, and even the rebellion itself—is a complete fabrication. Certainly the film contains sprinklings of historical fact, but the bulk of Parker’s story about the rebellion is fictitious: Nat Turner did not murder his owner, nor did he kill a slave patroller. Turner’s rebellion was not betrayed by a young boy, or by anyone else involved in the revolt. To the contrary, the rebels fought until the bitter end. The shootout depicted in Jerusalem, Virginia, never happened, because the rebels were stopped by the militia before they ever reached Jerusalem. The list of inaccuracies, distortions, and fabrications goes on and on.
Admittedly, historical accuracy probably matters more to me than to most people. And Parker was correct when he, somewhat flippantly, told journalist Anderson Cooper that “nothing is ever 100 percent historically accurate.” But how do we feel when the film contains only a smidgen of historical fact? And what if the historical inaccuracies are damaging and insidious?
Consider, for example, the film’s troubling depictions of black women. A crucial turning point in the movie occurs when Turner’s wife, Cherry, is brutally gang raped by a group of slave patrollers—an attack the film portrays as the spark that ultimately drove Turner to launch his rebellion. But there is not a shred of historical evidence to suggest that Cherry was ever raped by slave patrollers, nor is there any evidence to indicate that an attack on his wife inspired Turner to rebel. By all accounts, Turner took up arms against slavery because he believed slavery was morally wrong and violated the law of God. In the months prior to the rebellion, he reported receiving a series of visions and messages from God predicting a cataclysmic “race war” that would destroy slavery, and by early 1831, Turner believed that God had selected him as the person to lead the revolt.
Historian who spent his whole career studying Nat Turner and slavery says the movie is helpful
This article is about Kenneth S. Greenberg, a distinguished professor of history who recently stepped down as Suffolk’s dean of the College of Arts & Sciences.  He's the editor of a new edition of “The Confessions of Nat Turner.”
Like John Brown’s ill-fated insurrection, which helped trigger the Civil War, Nat Turner’s rebellion has been cast as both a heroic blow against an unjust institution and an indefensible act of terrorism. The man at its center, meanwhile, is still something of an enigma. Greenberg, who sits on the board of Boston’s Museum of African-American History, may know as much about the life of Nathaniel Turner as anyone, but he makes no claim to truly know the man.
“I look at him with tremendous respect,” he says. “As a historian, I came to realize I have an enormous responsibility to people who are long dead. They can’t talk for themselves.”
Even if a fictionalization like “The Birth of a Nation” is not quite as true to the facts, though, it offers a forum for discussion in a fraught moment over race, with police shootings of unarmed black men driving the Black Lives Matter movement, and a growing cultural discussion about the lack of recognition for black artists in Hollywood.
“Race relations have not been in good shape the whole time since I went to grad school,” Greenberg said, but “clearly we’re at a low point. A conversation about Nat Turner would be a healthy thing for this society.”
Tim Naftali’s Counterfactuals on CNN

Taylor Mac: Queer American Artist-Shaman-Historian of the Century. Make That Two Centuries.
At the beginning of the 24th hour of Taylor Mac’s monumental “24-Decade History of Popular Music,” the “queer womb” of pink fabric that had stretched across the entire performance space at St. Ann’s Warehouse in Brooklyn became Taylor’s dress for the finale. It was as if we’d been gathered under the performer’s loins the whole time, I thought. 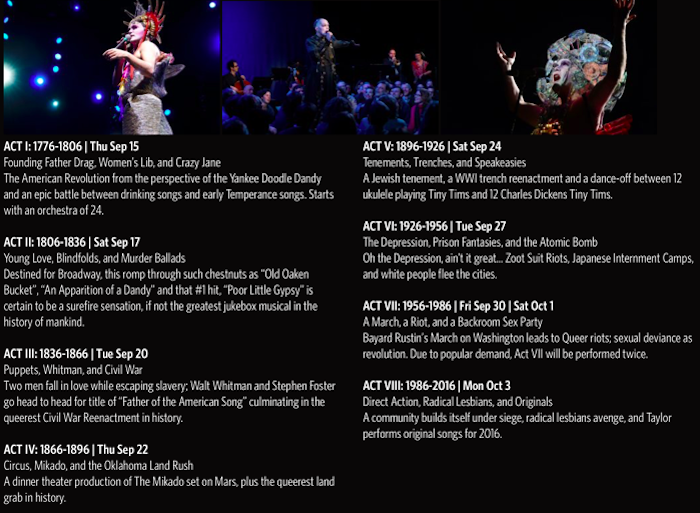 New Website on Martin Waldseemüller And His 1507 Map, the “Birth Certificate of America”
The Geography and Map Division of the Library of Congress and the Galileo Museum in Florence, Italy, today unveiled a multi-media interactive website that celebrates the life and times of 16th-century cartographer Martin Waldseemüller, who created the 1507 World Map, which is the first document to use the name “America,” represent the Pacific Ocean and depict a separate and full Western Hemisphere.

The website, “A Land Beyond the Stars,” brings the map’s wealth of historical, technical, scientific and geographic data to a broader public.  More than 11 hours of interactive videos explain the sciences of cartography and astronomy and the state of navigational and geographic knowledge during the time of Waldseemüller.

Shakespeare Explains the 2016 Election
In the early 1590s, Shakespeare sat down to write a play that addressed a problem: How could a great country wind up being governed by a sociopath?
The problem was not England’s, where a woman of exceptional intelligence and stamina had been on the throne for more than 30 years, but it had long preoccupied thoughtful people. Why, the Bible brooded, was the kingdom of Judah governed by a succession of disastrous kings? How could the greatest empire in the world, ancient Roman historians asked themselves, have fallen into the hands of a Caligula?
For his theatrical test case, Shakespeare chose an example closer to home: the brief, unhappy reign in 15th-century England of King Richard III. Richard, as Shakespeare conceived him, was inwardly tormented by insecurity and rage, the consequences of a miserable, unloved childhood and a twisted spine that made people recoil at the sight of him. Haunted by self-loathing and a sense of his own ugliness — he is repeatedly likened to a boar or rooting hog — he found refuge in a feeling of entitlement, blustering overconfidence, misogyny and a merciless penchant for bullying. 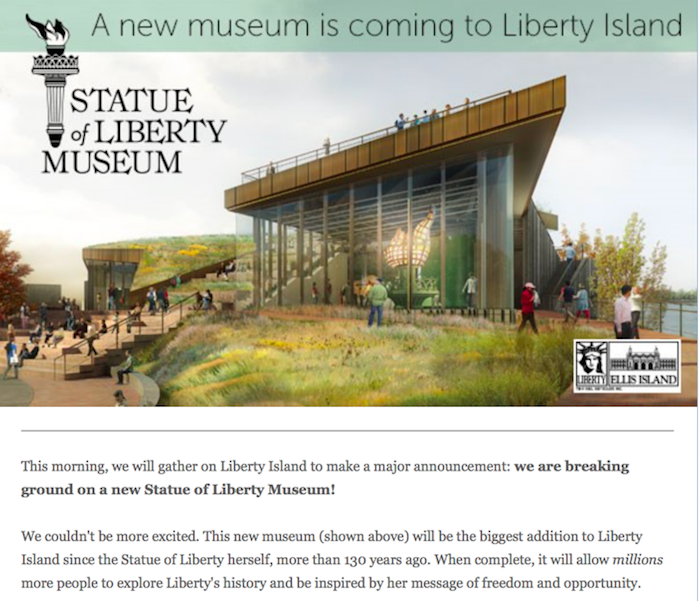