Greg Bailey is a St. Louis based history writer. His first book The Voyage of the F.H. Moore and Other 19th Century Whaling Accounts was published in 2014. He is currently writing a book on an event in Illinois history. 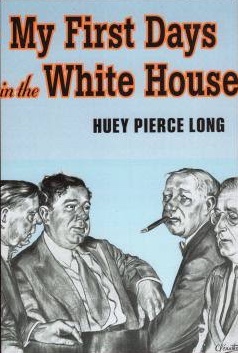 Donald Trump is not the first delusional demagogue to run for president, only to this point the most successful. In the 1930s an equally irresponsible although better qualified candidate challenged the political establishment on a basis of half-baked ideas and a massively inflated ego. Long before “the Donald” was “the Kingfish,” Louisiana governor and senator Huey Long.

Huey Long is best remembered today as the real person behind the character Willie Stark in Robert Penn Warren’s novel All the King’s Men or as the subject of Randy Newman’s brilliant songwriting. But in 1935 there was nothing entertaining or amusing about Huey Long and the real threat to the country he embodied. In advance of the 1936 election Long took his message of income redistribution called Share the Wealth to audiences across the country. Aligning his campaign with the right wing radio preacher Father Charles Coughlin and his thinly disguised anti-Semitic attack on bankers, Long used the Fox News Channel of his time to hammer the Roosevelt administration.

FDR and his allies took the threat seriously. General Hugh S. Johnson called Long and Coughlin the "great Louisiana demagogue and this political padre" "with nothing of learning, knowledge nor experience to lead us through a labyrinth that has perplexed the minds of men since the beginning of time.... These two men are raging up and down this land preaching not construction, but destruction-not reform, but revolution!"

The mainstream opposition did not shut down Long. He attracted huge cheering crowds eager to see the show and lap up his simplistic solutions for the fearful problems in their lives. President Roosevelt wrote to the American ambassador to Germany that "Long plans to be a candidate of the Hitler type for the presidency in 1936.” Roosevelt feared that Long would split the Democratic Party, throwing the election to the Republicans and setting the stage for Long to create a dictatorship in 1940. “Thus it is an ominous situation,” Roosevelt wrote.

Long could no more hide his delusions of grandeur than Trump can today. Long perhaps even out did Trump, at least so far, with his book My First Days in the White House. In the book Long fantasizes about delivering his inaugural address as a defeated Roosevelt glumly sits watching before rising out of his chair, apparently either cured of his polio in the magic of Long’s presence or evidence that Long was ignorant of FDR’s disability. As his first act President Long appoints Roosevelt as the Secretary of the Navy and former President Herbert Hoover as Secretary of Commerce, winning over his political adversaries by the sheer force of his personality. His other cabinet appointees are a laundry list of political celebrities of the day including bitter foe and former presidential candidate Al Smith. Chomping on his cigar as enters the oval office Smith says “Say, Huey, what’s the big idea?” But as always the Long charm works another miracle, converting Smith into an ally. His first day’s work in the White House done, Long glazes out of the window to the celebrating crowds. “Could other Presidents have had such confident throngs as these?” he wonders aloud before settling upon the obvious answer.

But in his book Long is just warming up. He assembles the ultra-rich including Rockefeller, DuPont and Henry Ford and convinces them to give up the bulk of their billions to the government to finance free college education for everyone by teachers with tripled salaries. When his plan is opposed by the governor of an unspecified state Long flies over in secret to rescue the official from the hoard of angry supporters of the Kingfish. The chastened governor sees the light and agrees to cooperate. Congress, the Supreme Court, the press all fall meekly faced with the strength of Long’s existence.

Long did not live to see his book in print. In September, 1935 he was shot inside the state capitol building in Baton Rouge by Dr. Carl Weiss, the son of a judge Long opposed. Dying two days later the 42-year-old’s last words were "God, don't let me die. I have so much to do."

No one, of course, can know what would have happened if Huey Long had not been killed. There is a chance he could have put his fantasy of winning the presidency into reality, but no chance whatever the political world would have followed his script. President Huey Long would have quickly plunged the country into the worst crisis since the Civil War but without a Lincoln to save it. It would have been a disaster the country may not have survived. It is a lesson well worth remembering in November.