Both Parties Back Economic Growth. But Are They Wrong?

Paul Croce is Professor of History and Chair of American Studies, Stetson University; he writes for PubClassroom.com and the Huffington Post. 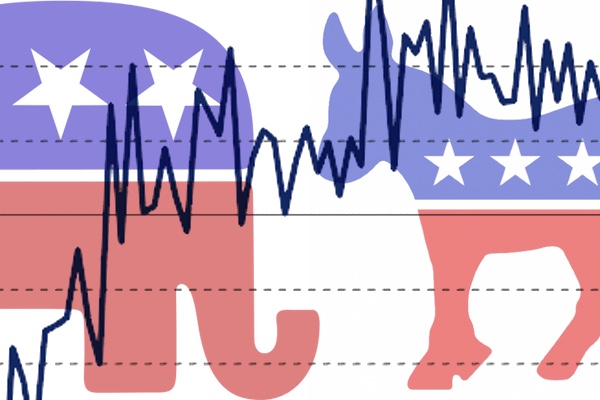 In the first Presidential Debate, Hillary Clinton did a good job demonstrating her competence and good sense even when facing the barbs of Donald Trump’s aggressive charges. She is well informed on issues ranging from bank regulations to the Syrian Civil War. By contrast, Trump’s assertions were slim on facts and long on lurid descriptions: the disasters of recent wars, trade deals gutting American industries, career politicians accepting business as usual.

You don’t have to agree with Trump to notice that he is telling likely stories, ones that line up with the experiences of a lot of Americans. He also speaks with an unquenchable confidence, and he exaggerates, selecting the worst parts of people and events. But the partial plausibility of his narratives points to widening gaps in recent US society. We ignore that narrative at our peril.

A recent study by the Urban Institute showed that from 1979 to 2014, the upper middle class and rich (with incomes of $100,000 or more) climbed from 30% of all incomes to 63%, while the equivalent for the middle class, earning from $50,000 to $100,000, declined from 46% to 26%. That’s a dramatic change in 35 years, and it puts numbers on experiences that most people have been intuiting and noticing, all within the span of any one person’s career. And this is even before considering the fate of the working class and poor; there are fewer Americans in those classes, but citizens at those lower economic rungs of society have increasingly limited opportunities.

This campaign season is operating with a Hollywood-type “anger management” approach to outbursts of anger. While Trump hopes to ride the wave of anger to victory, Clinton presents the calm alternative, with promises to manage the maddening issues. It’s a campaign between Stoking the Outrage and The Empathy of the Well-Connected. Trump taps the widespread intuitive sense of some deep problems in the system and its directions, but his diagnoses are broad and unfocused, and his prescriptions, from the Mexican wall to unilateral trade policies, would likely make matters even worse. For all of his high negatives, he has been gaining support beyond the predictions of almost all commentators and political managers precisely because Clinton is defending the status quo with credentials as an adept institutional player.

So we have an election that pits the dreams of the already-wealthy with an exuberant gospel of “huge” wealth if we can only stop regulating our enterprising citizens, versus the noble aspirations of the civic minded expecting that the right mix of educational training and worker protections will be an even better route to that exuberant economic growth.

Neither the competence of Clinton nor the intuitions of Trump attend to the economy’s lurking structural problems. The anger emerges less from outbursts over immediate suffering than from perceptions that opportunities are slipping away.

The bipartisan anger against Wells Fargo CEO John Stumpf showed the depth of outrage over the sense of entitlement among the rich and powerful. Entry into the cutting-edge of the economy requires years of education, which is becoming so expensive that it reinforces the feeling that it takes money (or enormous debt) to make money. And relatively low retail prices that consumers currently enjoy often come with outsourced jobs, which bring short-term price gains but long-term community erosion; meanwhile, prices on things that cannot be outsourced, not just education, but also housing and health care, continued to increase dramatically.

Beneath all these structural issues is a commitment to constant growth. In the face of broad consensus over its value, the candidates wrestle over claims to the best ways to achieve it; and they spend even more time pointing out the faults that keep their respective constituencies from getting their pieces of the growth pie.

They are like crabs in an unsustainable boiling pot with each one trying to stop the other one from getting out using its favored path. But each way out has to go through the boil: progressives blame corporations for seizing more power even as citizens crave the goods that businesses produce; mainstream Republicans blame the government for inhibiting the ability of business to prosper even if at the expense of natural or community well-being.

Meanwhile, the pot of constant growth keeps boiling away, with more growth the sole measure of a better life. Some growth is good, but as with anything, it has its excesses. The goal should be healthy growth. In the language of economics, growth is healthy as long as the benefits exceed the costs, but when the generation of goods and services becomes massive, the costs far outstrip the benefits. So excessive growth can be unhealthy. In fact, in medicine, it’s called cancer.

We now have political parties that agree on extravagant growth and agree to overlook its major problems. Meanwhile, the quest for constant growth keeps biting back in the inability of the economy to keep up with advertised expectations especially during regular economic downturns, in the pressure on companies to engage in harmful practices to keep profits flowing, in the tendencies to extract prosperity from powerless people or landscapes, in prospects for more efficiencies coupled with less personal contact, and in the high cost of government programs needed to cope with the side effects of all this craving for constant growth.

If we didn’t seek so much growth, there would be little need for the candidates’ policy proposals to cope with its problems. Politics could turn to its prime goal of stimulating creativity and cooperation to sustain well-being and to prevent assaults on its health. The pioneering economic theorist John Stuart Mill observed that with less growth, there would be “as much room for improving the Art of Living and much more likelihood of its being improved.”

A media celebrity recently said, “being paid more than you’re actually worth is the American Dream.” That’s an expression from the high wave of extravagant growth, and when expressed by a celebrity, it shows our aspirations. This outlook sets a model for all of us smaller fry to try to live up to that overabundant standard. And there is plenty of media attention to stars whose commodity is fame and who circulate in a whole different economy of luxury and privilege.

The nation’s first Republican President presented a different picture of the American Dream based on getting an honest day’s pay for an honest day’s work. Abraham Lincoln recognized that people will rise and fall to different stations in life, but those differences in status should emerge, he hoped, based on equal opportunity and individual merit rather the privileges that arise from overwhelming economic power. This vision of democratic economic life requires a government that insures fairness for all, and it calls for individuals to bring ingenuity and planning in their efforts to make their own living or become economic players in their communities or beyond.

Lincoln expressed this vision at a time when many other Americans sought to achieve the American Dream by extracting their income from the work of others. While Lincoln presented a model for healthy growth, slaveholders sought unhealthy growth through their power over slaves who extracted wealth for them. By the early twentieth century, even any talk of such tempered approaches to growth became associated with radical challenges to the unfettered marketplace as the only American way. Even liberals presented their moderations on market-driven economic growth as variations to insure its long-term success; for example, the Franklin Roosevelt and Harry Truman promoted New Deal and Fair Deal measures with the slogan, “if you want to live like a Republican, vote Democrat.” By the 1990s, Bill Clinton and fellow New Democrats moderated their politics by turning away from any modifications of the path of great growth; and sure enough, it was a decade of “irrational exuberance,” in the words of then-Federal Reserve Board Chair Alan Greenspan.

There is little doubt that that the current path will lead to more short-term prosperity, especially with abundant ways for the wealthiest to become wealthier. This has left the majority of Americans deeply frustrated, not just over the current choice of candidates with high disapproval ratings, but also because of a restless sense that on our path, constant, unquestioned, extravagant growth cannot be sustained, leaving most citizens with an unhealthy future.