Each week we come across stuff that's weird.  Sometimes it's horrifying.  This is where we're sharing what we find. Make of it what you will! The text comes directly from the websites we’re hyperlinking. 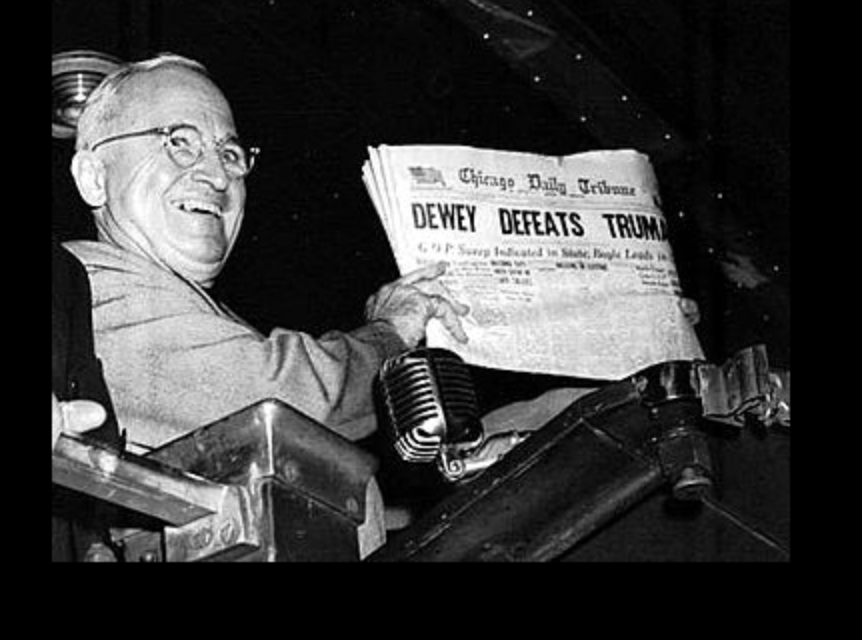 Associated Press photo by Byron Rollins
The story behind the Dewey Defeats Truman headline By James Warren
I discussed that debacle with Jim O'Shea, a friend who's former editor of the Los Angeles Times and managing editor of the Chicago Tribune. He reports:
"The Tribune and many other papers were struggling with election results because of a typographers strike. The cumbersome process of rushing a 120 type headline to a page plate in time to roll off the presses forced the paper to go to press long before the polls closed. Arthur Sears Henning, the Trib's Washington bureau chief and dean of the Washington press corps, was so confident in all of the predictions of a Dewey victory he wrote the lead story before 9 a.m. on Election Day. The first actual returns came from Republican heavy Kansas and showed Dewey leading, although by a far smaller lead that had been expected."
"Even though the returns started to suggest an upset was in the making, Trib honchos, clinging to their beliefs that the predictions were sound, kept the headline on the stories as the first editors of 1.1 million papers were loaded on trucks and sent to the paper's far-reaching circulation areas such as Dubuque, Iowa. Overall, some 150,000 papers with the Dewey Defeats Truman headline went out before it was changed, giving Truman that great photo of him holding up the copy of the paper with the bad headline and earning the Tribune a distinction for inaccuracy and a cloudy crystal ball that lasted for decades."
"I remember one night in the late 1990s when I, as a fresh new national foreign editor, wanted to call an Illinois congressional race only to be stopped by the wise old political hand, former Tribune Managing Editor Dick Ciccone. He told me: 'Never forget, you work for the paper that ran the Dewey Defeats Truman headline. Don't you ever try to call an election until we know who won.'"
Immigrants could often vote in the 19th century — even if they weren’t citizens!
By the 1830s, free white men could vote in virtually every American jurisdiction. Those who were widely barred from voting—slaves, free African Americans, and women, like youths—were understood to be “dependents” subject to the will of others at the polls.
But for white men, the only generally required qualification for voting was one year of residency, two at the most. What began as a restricted republic of property holders became a white men’s democracy. Most remarkable from the perspective of 2016, there was no uniform requirement that voters be United States citizens, or even citizens of the state where they resided. As Alexander Keyssar reported in his The Right to Vote: The Contested History of Democracy in the United States (2000), as of 1855, though eighteen of the nation’s thirty-one states did require U.S. citizenship to vote, two (Ohio and Rhode Island) had only added that stipulation in 1851. Three states (Indiana, Michigan, and Wisconsin) explicitly stated that foreigners could vote if they intended to become citizens. And ten more, mostly the original states formed during the Revolution, demanded state citizenship only. When Abraham Lincoln was elected in 1860, tens of thousands of foreign immigrants who were not U.S. citizens were voting in states from the Carolinas and Virginia to New York and Massachusetts, and west to Indiana and Michigan. The Revolutionary cry, “No taxation without representation,” remained central to voting rights, even more basic than national allegiance. 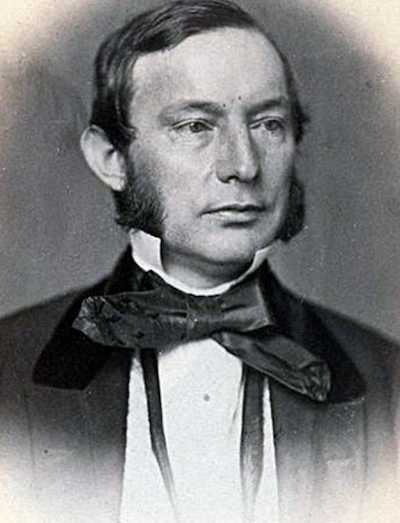 America’s little-known Marco Polo:  Diplomat Anson Burlingame
“We can’t continue to allow China to rape our country,” Republican nominee Donald Trump told his supporters in Indiana this May. And while some may have expected more moderation from the senior leadership of Abraham Lincoln’s party, the GOP echoed Trump in its 2016 party platform this July, labeling China a nation of “barbaric population control” and guilty of “cultural genocide.”
But back when these nations were second-rate powers, they shared a diplomat whom Mark Twain eulogized as having “outgrown the narrow citizenship of a state and become a citizen of the world.” Republican congressman-turned-ambassador Anson Burlingame was so beloved by the Qing court that when his six-year service to America expired in 1867, the emperor hired him. During China’s “century of humiliation” marked by European powers’ race to carve up the “Sick Man of Asia,” the Burlingame Treaty of 1868 granted China and America mutual “most-favored nation” status.
Despite the historic treaty he signed as the Chinese envoy to Washington D.C., Burlingame’s legacy remains largely forgotten beyond his namesake town in the Bay Area. A 1912 biography by Frederick Well Williams remains the most authoritative work about the man, according to Hong Kong University’s Guoqi Xu, author of Chinese and Americans: A Shared History, who says he’s “surprised that nobody in today’s U.S. really remembers” the diplomat.
Was Hamilton a tom cat?
From the Newsletter of the New York American Revolution Round Table.
Michael Newton, author of a new book on Alexander Hamilton, has exploded one of the most popular myths that became attached to the founder during the years he worked as Washington’s aide.  Newton has revealed there is no truth to the story that Martha Washington named the tomcat who frequented Washington’s headquarters at Morristown “Hamilton.” Newton thinks this half joking story has tarnished Hamilton’s memory for a long time.  He discovered that until around 1927, “tomcat” was merely a male cat. Newton also tracked down the original documentation of it as a description of Hamilton in the private journal of a British officer. Some people have extended the myth to claim there were 13 stripes on the tail of Martha’s tomcat, and they inspired the 13 stripes in the flag! Dismissing this silliness, Newton adds that the myth has endured for two centuries because Martha’s name was attached to it.
Australian boy wins 'best dressed' prize for Hitler costume
An Australian school has apologised after a boy who attended a school event in costume as Adolf Hitler was named as one of the "best dressed" students.
The scandal unfolded on Wednesday at St Philip's College, a private school in the outback town of Alice Springs.
The school apologised to the Jewish exchange students who were present.
The principal confirmed the student asked "a respected staff member" for permission to dress up as the Nazi dictator and that she had said yes.
"In a busy school, this student did go to a respected staff member said 'is this OK?' and the staff member said 'yes'," Roger Herbert told the Australian Broadcasting Corporation. 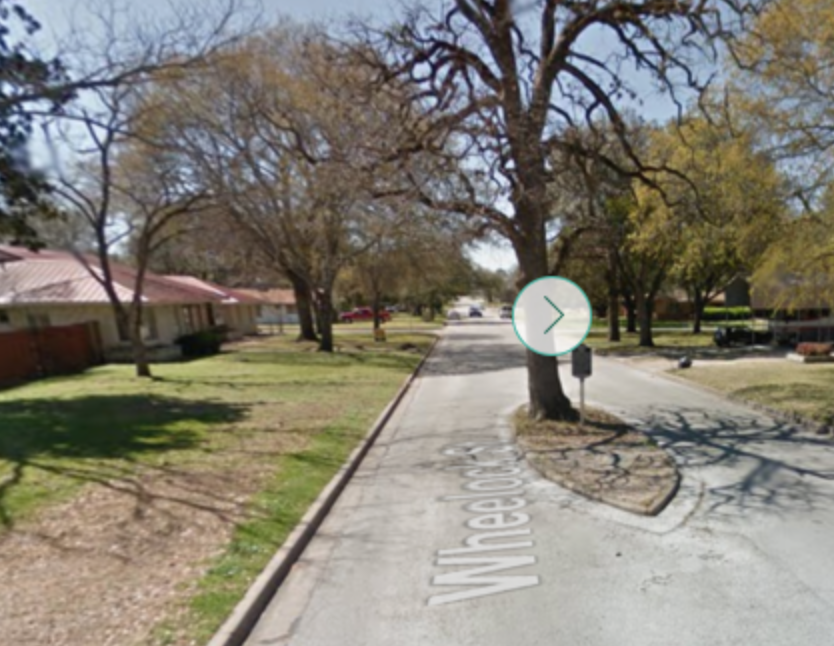 This one-woman cemetery was a small civil rights victory
"TO THE MEMORY OF  'OUR MOTHER' HOLLIE TATNELL 1859 – 1911"
The town of Hearne is known as "The Crossroads of Texas" because it sits at the intersection of several highways and railroads. The little town used to be a hub of transport and commerce, but is now fairly sleepy pit stop. Amid the suburban houses and grassy lawns though, there is an unusual sight: a body buried in the middle of the street. [It’s the grave of a slave. Her family refused to move the grave after developers moved in.]
Nearly everything in your home is a certain size, thanks to German architect Ernst Neufert
Almost every kitchen counter in the United States is 36 inches tall. And 25 inches deep. Eighteen inches above the counters are the cabinets, which are 16 inches deep.
Where do these sizes and dimensions come from? Have they always been so exact?
Building standards, as these numbers and rules are often known, are everywhere, helping shape everything from your kitchen cabinets and the sidewalk in front of your house to the layout of your favorite restaurant. Despite their prevalence, building standards really only came into being in the last century. A major turning point in their wild proliferation arrived in the 1920s, when the German government made the then-radical decision to standardize the size of office paper.
This seemingly bureaucratic move inspired a modernist architect named Ernst Neufert to create standards in his own field, ones that would simplify and streamline the work of design and construction. His efforts would change the size and shape of much of postwar Germany, as well as how architects around the world approach design to this day.
Trump’s appeal in many ways can be traced back to a racist 100 year old book:  Madison Grant’s The Passing of the Great Race
2016 marks a century since the publication of The Passing of the Great Race, a book described by the late paleontologist Stephen Jay Gould as “the most influential tract of American scientific racism.” Its author, Madison Grant, a genteel dabbler with impeccable establishment ties, was a pure and unabashed bigot, a patrician who defended social inequality as the outcome of biological fact. The good people of the heroic Nordic race, he cried, were always at risk of subversion by their darker-skinned inferiors, even in the land of Horatio Alger, where heredity, with enough sweat from one’s brow, was not supposed to trump environment or self-determination.
The Passing of the Great Race has had many uses over the years. The Führer himself raved about The Passing, calling it “my Bible,” and it was entered into evidence at the Nuremberg war crimes trials in defense of Hitler’s personal physician to show that specifically American theories of white racial superiority supported the crimes against humanity with which he was charged—forced sterilization, for instance, or unnecessary and experimental surgery performed without anesthesia….
Aside from the book’s centenary, the central place of anti-immigrant animus in this year’s campaign furnishes us with another reason to revisit The Passing. To be sure, there are huge differences between the way Grant, a prim figure of high WASP respectability, expressed his fears about immigration and the ways Donald Trump has sought to exploit those same fears today. If anything, Grant was the quintessential establishment figure of his time, not an upstart populist demagogue who wields racial rhetoric to poke it in the eye.
Nevertheless, when Grant describes New York as a “cloaca gentium,” or sewer of the nations, he expresses an idea that’s not completely alien to what Trump says when he refers to the United States as “the dumping ground for everybody else’s problems.” For all their manifold and profound differences, Trump exercises the same fears of foreign infiltration. Mexico, he claims, is sending “people that have lots of problems [into the US] … They’re bringing drugs. They’re bringing crime. They’re rapists.”
comments powered by Disqus