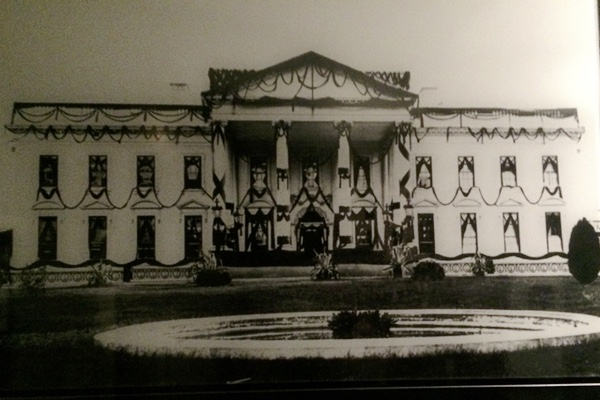 White House dressed in mourning after the assassination of President Garfield, 1881.

We are now in the month of the most threats against America’s Presidents historically, the month of September.

As discussed in another recent article on HNN, eight times we have seen a President facing danger in September, and even a ninth case with a Presidential candidate, and now in the midst of this month, Donald Trump has, for the second time, used loose, reckless language to suggest that violence might ensue against his opponent, Hillary Clinton, over the issue of the Second Amendment.

Trump first suggested this on August 8, and was roundly condemned for it, and yet, he has now doubled down on September 16, and brought it up again, not realizing that an unstable person out there in America, or even an extremist group, could take the implied suggestion of harm against his opponent, as an invitation to plot against her, and therefore get notice and notoriety in the process.

Michael Hayden, former head of the Central Intelligence Agency and National Security Agency, had commented in August that if someone had said what Trump uttered outside the rally, that such person would find themselves in the back of a police van. And Senator Chris Murphy of Connecticut, the home of the Newtown Massacre in December 2012, condemned Trump, saying he would have blood on his hands if Hillary Clinton were harmed by his utterance.

We have a severe problem with mental illness in this nation, and we have a substantial population that feels aggrieved, and the propaganda emerging from the Trump campaign incites people a great deal, as shown by the violence and comments made at many Trump rallies over the past year.

Donald Trump’s rhetoric is an incendiary device, as much as an improvised explosive device, and has an impact far greater than he seems to realize. We do not need any more invective than we have already had from Trump, as all it does is poison the political atmosphere of the country, at a time when what is needed is to promote unity and cooperation, rather than confrontation and gridlock.

Language does matter, and any Presidential candidate, while certainly having the right to criticize the ideas, beliefs, and record of their opponents, do not have the right to promote rhetoric which undermines basic civility, as the nation needs to come together once the election is over. This is not promoted by suggesting that the Secret Service should put down their weapons so we can see what happens when a candidate meets large crowds (which certainly may include some very dangerous, unstable people).

A Presidential candidate has a responsibility to show respect for their opponents and to behave in a way that would be appropriate for children to witness, as well as adults. Character assassination sets a bad example for the audience that has gathered for an event, as well as when it goes over the radio, television, cable and internet, sending an entirely improper message to everyone.

There is absolutely no excuse for Donald Trump’s loose, careless language, which only makes the work of the Secret Service ever more difficult. Dealing with the constant threats against President Obama and his family, Vice President Joe Biden and his family, and the arduous, stressful job of protection of Presidential candidates is not helped by Trump’s reckless behavior. Besides increasing the danger to Hillary Clinton, Donald Trump is also undermining Secret Service protection for himself, as he has incited many unstable people who wish for his demise.

So Donald Trump needs to be told that all such reckless language, suggesting or implying harm against Hillary Clinton, is totally unacceptable. The Secret Service has already discussed this with him and his campaign after the previous event in August, but Trump needs to be read the “riot act” that any more such language or provocation could lead to criminal prosecution under the concept that what Trump has done is a “clear and present danger” to his opponent. Freedom of speech does not include the right to cause harm by one’s language to one’s political rival or rivals.

It is time for Donald Trump to start acting “Presidential” with less than two months left in the Presidential campaign. And all of us need to pray for the safety and protection of our Presidential candidates, including also Gary Johnson and Jill Stein, as we all should want a peaceful, uneventful September, October and early November, as we get ready to pick our 45th President of the United States, and wish him or her a safe four year term in the Oval Office.