Our Sad Record When Presidents Get Sick 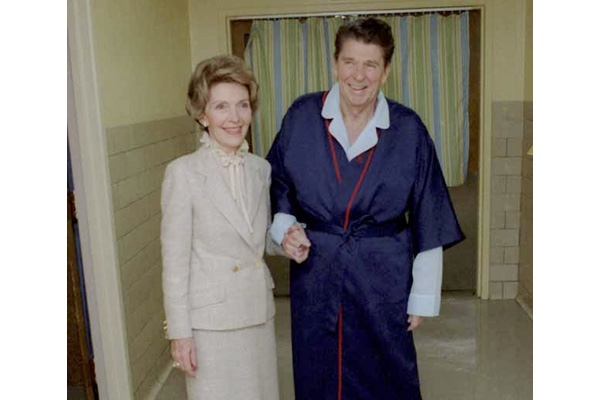 The diagnosis of pneumonia for Presidential candidate Hillary Clinton brings to mind the reality of illness having an effect on the Presidency, and the normal practice of doing everything possible to hide such illnesses from public view and knowledge. There have been many cases in American history of such situations being kept hidden. And the idea of a Vice President assuming power has been avoided even in serious situations, even since the 25th Amendment (1967) allowed for an “Acting President.” Examples abound of Presidential illnesses without anything being done, no matter how serious the illness of the President.

When William Henry Harrison fell ill with pneumonia on Inauguration night in 1841, and even when he fell into a coma, nothing was done to allow Vice President John Tyler to assume power. Even when Harrison died a month into his term, the Whig Party refused to accept Tyler as being President, and caused a major confrontation between Tyler and Whig leader Henry Clay, with Tyler asserting himself as President in every sense of the word. This established the precedent that vice presidents who become president owing to the president’s death in office are always referred to as “the president.” But Tyler had to fight for that status.

In 1857, President James Buchanan was seriously ill with flu like symptoms and almost was unable to give his Inaugural Address, but met his responsibility, although laid up recovering for two to three weeks. No thought of Vice President John C. Breckinridge taking over temporarily was ever considered.

When James A. Garfield was shot and mortally wounded by Charles J. Guiteau in 1881, and lay dying in a coma much of the next 79 days until his death on September 19 of that year, no action was taken to allow Vice President Chester Alan Arthur to assert any leadership.

Two very serious situations existed under Presidents Grover Cleveland and Woodrow Wilson, the only Democrats in the White House between the Civil War and the Great Depression. Both had a serious health crisis which endangered their lives, but both remained in the Presidency. Cleveland had cancer of the jaw, and Wilson had a serious, paralyzing stroke, and their health conditions were kept secret by their refusal to provide information to a media not as aggressive then as now.

Cleveland was in his second non consecutive term of office (1893-1897) with his Vice President in this term being Adlai Stevenson I, the grandfather of future Democratic Presidential nominee Adlai Stevenson II in 1952 and 1956. In 1893, the first year of his second term, Cleveland noticed a growth on the roof of his mouth and the hard palate, consulted a surgeon, and arranged for surgery aboard a yacht sailing off Long Island, without any notice to the news media. He came through the surgery successfully, and it was later said he had had two teeth removed, when actually he had had parts of his upper left jaw and hard palate removed, and a hard rubber dental prosthesis implanted in a second surgery that corrected his speech and restored his appearance without any public knowledge of the events.

As that event is looked back upon, while denying that it was cancer at the time, it now is considered that Cleveland probably had a low level form of cancer, which likely would not have developed into a serious malignancy, but it was still a health crisis kept quiet. Since the crisis was resolved and Cleveland lived on until 1908, Vice President Stevenson, who played an insignificant role in that office, typical in American history until the 1940s and since, was forgotten. Stevenson had served as a two-term Illinois Congressman in the 1870s and as Postmaster General in the first Cleveland term. He would be better remembered later on in history for the fact that his grandson ran for President twice in the 1950s. Also, he had the distinction of being nominated again for Vice President in 1900, running on a losing ticket with William Jennings Bryan, Grover Cleveland’s leading critic, when Bryan first ran for President to succeed Cleveland in 1896.

Woodrow Wilson (1913-1921) suffered the most serious health crisis in American history, struck by a stroke in October 1919, which paralyzed him on his left side, and left him with only partial vision in his right eye. The news of his poor health and serious condition was kept from the public and the news media, and his wife, the First Lady, Edith Bolling Galt Wilson, conducted cabinet meetings as if she was Vice President. Wilson had to use a wheelchair and a cane, but was kept from public view.

Vice President Thomas R. Marshall was never fully informed of the President’s condition, and never saw the President in the last 17 months of the term, until just shortly before the inauguration of Warren G. Harding in 1921. Members of Wilson’s cabinet promoted the idea that Marshall assert himself as “Acting President” but there was no clear cut constitutional provision for such, until the 25th Amendment a half century later. Marshall was not well liked or consulted by Wilson in the earlier years of the Presidency. Mrs. Wilson disliked him and Marshall never felt comfortable asserting himself in the midst of the health crisis.

So America saw the defeat of the Versailles Treaty and American membership in the League of Nations; the development of the Red Scare; massive economic disruptions; and racial tensions, in the midst of not having a President at his best to meet his responsibilities, and a reluctant Vice President unwilling to make an issue of Wilson’s health. Many think Marshall would have calmed the stresses and tensions prevalent in the nation at a crucial time when Woodrow Wilson was not equipped to govern, but refused to give up his Presidential power and resign, which would have been the proper thing to do under the circumstances.

When Franklin D. Roosevelt was serving his third term in the Presidency during World War II, he had severe heart disease and lost a lot of weight, and his doctors knew he was in poor health, and even probably dying, but the idea of Vice President Henry A. Wallace taking over temporarily, or even being given much information about the President’s condition, was rejected. This could have partially been motivated by FDR’s egotism that only he could do the job as President, and also the growing disillusionment with Wallace as second in command, leading to the move to drop him from the ticket in 1944, replacing him with Harry Truman.

Dwight D. Eisenhower had a severe heart attack in 1955, and the effort of the White House was to minimize the health crisis, but Ike did allow Vice President Richard Nixon to take over duties of the President in a very public way, unusual and unique, but adding to Nixon’s credentials that he was fully qualified for the Presidency, based on that experience and two other lesser health issues that the President suffered in 1956 and 1957.

When Ronald Reagan was shot in 1981 by John Hinckley, no direct move to invoke the 25th Amendment was made to allow George H. W. Bush to take over. And when Reagan gave some staff people concern over his mental stability in the second term, White House Chief of Staff Howard Baker arranged for some crucial observations and evaluations of the President’s ability to do his job, and came away believing Reagan was capable of fulfilling his duties, so that the 25th Amendment was again not put into play. However, when Reagan had colon cancer surgery in 1985 Vice President George H. W. Bush was given full authority to act as president under the 25th Amendment. This was a first. His “presidency” lasted 7 hours and 50 minutes.

President George H. W. Bush had a virus while on a diplomatic trip to Japan, vomiting on the Japanese Prime Minister in 1992, but the incident was brushed off as nothing to be concerned about, as Bush was in the process of running for reelection. He recovered quickly, and no consideration of Vice President Dan Quayle taking over was made. Nor was any action taken when Bush had an incident known as “atrial fibrillation,” an irregular heartbeat, in 1991.

His son, George W. Bush, had two colonoscopies in 2002 and 2007, with Vice President Dick Cheney taking power under the 25th Amendment for a few hours each time, but otherwise the Amendment has never seriously been put into play.

The fact that Hillary Clinton has pneumonia is not cause for hysteria, as it is very common, and easily treated, but what this news does do is make one think about who is Vice President in the next term, and clearly, the thought of a Tim Kaine succeeding to the Presidency is far more acceptable and comforting than if Mike Pence were to be next in line. But no President or Presidential candidate is likely to volunteer more information about his or her health publicly, except under media pressure. One can be sure that Donald Trump would be no more willing to reveal anything about his health except under public demand, which may happen now for both candidates, due to the Hillary Clinton news story.