Is Donald Trump One of Russia’s Useful Idiots?

Jeffrey Kaplan is a recently retired Associate Professor of Religious Studies at the University of Wisconsin. He has written more than a dozen books and more than fifty articles on religious terrorism and political violence. His most recent article is on ISIS in Terrorism & Political Violence and his latest book is Radical Religion and Violence: Theory and Case Studies, from the Routledge Distinguished Scholar series, which reprises his work over the last 25 years. He spent some years in the 1970s in Bulgaria and Czechoslovakia and lived much of his adult life in the Middle East. He has accepted a professorship at Jilin University in China beginning next Fall. 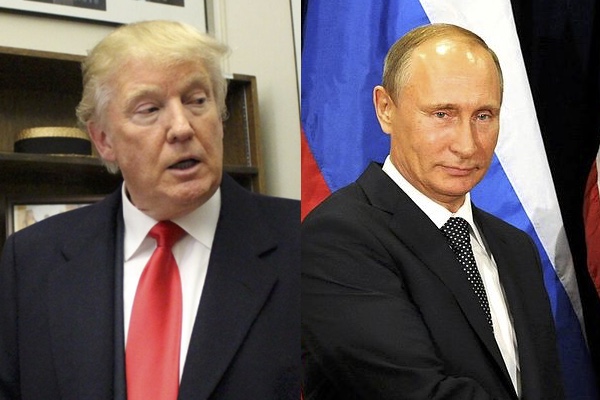 The only possible reason to vote for Donald Trump is the specter of Hillary Clinton in the White House. Or reason enough to cast my ballot for the GOP ticket. That changed when he welcomed cyber espionage by the Russian intelligence services in the US election. He was unaware of the Russian seizure of Crimea, but once apprised he was quick to ratify the occupation. In the days that followed, he disavowed the US mutual defense commitments to NATO allies while displaying a remarkably vague knowledge of American policy. By this stage the campaign had eerily begun to reflect aspects of the Cold War.

Which is why the earth moved under my feet when I saw his interview with George Stephanopoulis. Trump’s unquestioning support of Russia brought back powerful Cold War flashbacks. There is a wall in CIA headquarters where the names of those who died in the service of this country during the Cold War are enshrined. Few of these men and women are known outside of the intelligence community, but they gave their lives in the defense of the ideals of this nation. It is inconceivable that an American President, through ego, avarice and ignorance, would provide diplomatic cover for Vladimir Putin’s assault on countries emerging from Soviet tyranny. This is an affront to those Americans who died fighting for freedom, to say nothing of those courageous men and women who daily put their lives on the line today to secure the freedoms that Americans would cavalierly put at risk under a Trump administration.

Career CIA officer Michael Morell brands Trump as an unwitting Russian agent. An all-star lineup of the American intelligence community warns that Trump is both unqualified and a threat to national security. Evan McMullin, another former CIA officer, then jumped into the race on national security grounds. Against this wave of opposition stands only Lt. Col. Ralph Peters, a dead ringer for General Jack D. Ripper from the Cold War classic Doctor Strangelove. He was suspended by Fox News for his profane attacks on President Obama, which for Fox is remarkable.

Many American analysts argue that the Russian leadership would be profoundly uncomfortable with a leader as unstable as Donald Trump. On the contrary, a Trump victory would be the culmination of a half century long Soviet/Russian strategy that has sought to influence global political discourse. Moreover, the Russians see an opportunity to exert almost exclusive influence over a leader who is already more reviled by the international community than was George W. Bush.

I am not now and have never been either an intelligence agent or a supporter of Hillary Clinton. However, the view that Trump is an asset to Putin’s Russia rings true. The myriad Russian intelligence services continue to deploy the Soviet era disinformation and covert influence operation known as Active Measures. It blends an array of overt, covert and gray area actions that were aimed at controlling the narrative—seizing the language—of international political discourse. The idea is simple enough, but the coordination of multiple policy instruments, and the need for all voices to speak in concert, is possible only in an authoritarian system. On the covert side, disinformation included classic espionage, blackmail, and the use of agents of influence whose allegiance to the Soviet Union was hidden.

Vladimir Putin was engaged in the Active Measures campaign, as were all senior KGB officers. In his piecemeal reconstruction of the Soviet empire commissars have been replaced by oligarchs and the KGB has been rebranded, but the objective, Russian hegemony, remains the same.

Defense Secretary Ash Carter and Marine Commandant Joe Dunford, Chair of the Joint Chiefs of Staff, reflect the consensus of military and intelligence commanders that Russia presents an existential threat to the U.S. while Donald Trump proudly boasts of his fealty to Russia.

Trump is not a Russian agent, a Manchurian candidate or even a classic agent of influence. Rather, he personifies a term often ascribed to Lenin: useful idiots. These were people whose naivety could be used to Soviet advantage. They could be discarded once the Communist Party seized power. I am also reminded of another line attributed to Lenin: when we come to hang the capitalists they will sell us the rope. Naiveté and greed are at the heart of Trump’s tweeted thoughts.

Russia’s flirtation with the Trump campaign reflects its engagement with the European Union’s far right, based on a shared opposition to NATO, the United States and the American role in European security. All are core Trumpian themes.

The opportunities which a Trump presidency would present to the Russians are sobering. In the Middle East, Trump’s Islamophobia validates Al Qaeda’s founding vision of America as irretrievably hostile to Islam. A Trump presidency would be seen by ISIS as a gift from God. ISIS founder Abu Bakr al-Baghdadi preaches an apocalyptic vision centering on a great final battle out of which will emerge the perfect Muslim society. However, a Dajjal—an anti-Christ figure—who will persecute innocent Muslims in the Final Days is required. Trump’s Islamophobic threats of exclusion, isolation and deportation in America, and carpet bombing, the torture of the families of suspected terrorists, and perhaps a nuclear strike in the region would certainly qualify him for the role of the Devil’s apprentice. He would serve as the ultimate recruiter for radical Islamist groups of all stripes.

Trump’s followers do not realize that the war on ISIS is fought on the ground primarily by Muslims. Will they continue to fight and die in a struggle against one of America’s most implacable enemies after the election of Donald Trump? Indeed, would American commanders in the region obey orders which violate international law and human decency?

Michael Morell suggests Trump was recruited by a few kind words from Putin. Ego, ambition and his unique imagination provide the strings from which Putin’s puppy now dangles. Trump was uniquely susceptible to Putin’s honeyed words. He is an imaginative man for whom reality is infinitely malleable. He appears to have a news channel in his head that plays non-existent videos such as his meeting and conversations with Putin, the mysterious tape of Muslims celebrating 9/11, a plane filled with money landing in Iran, letters from the NFL that were never sent, that President Obama and Hillary Clinton founded ISIS, and that “Crooked Hillary” is actually the Devil.

What made Donald Trump such an easy mark is more than ego and imagination. For someone with the right connections the streets of Moscow can be paved with gold. Just ask the senior ranks of the Trump campaign. His former campaign manager, Paul Manafort, was well paid for his work with ethnic Russian plutocrats in Ukraine. (Records indicate he may have been paid as much $12.7 million, according to the New York Times.) His signature work was for the presidential campaign of Viktor Yanukovych, an ethnic Russian businessman who briefly became president of the Ukraine when his opponent, Victor Yushchenko, was poisoned by dioxin, a signature KGB weapon. Trump’s call for Second Amendment people to deal with his Democratic opponent dangerously seems to echo this kind of deadly politics.

Senior advisor Carter Page is an advocate of Russian interests who blurs the lines between useful idiot and village idiot according to the Guardian, which attended his somewhat bizarre news conference in Moscow in which he “offered little except confusion and the occasional snigger, during a rambling presentation and an evasive question-and-answer session.” He opposes sanctions on Russia and on Putin’s inner circle. Trump, whose knowledge of the world is sketchy at best and whose views reflect those of the last person he spoke with, likely could not help but be influenced by his advisors’ pro-Russian sentiments.

Some people are saying that the Trump’s campaign’s fealty to Russia is tantamount to treason. I don’t say that myself, but…

In normal times voting for Hillary Clinton would have been inconceivable for many who will cast their ballots for her. Her election would bring the Bill Clinton era “sleaze factor” to unprecedented levels of soft ethics and hard cash. If any other Democrat had been nominated, I suspect that there would have been a chance for an unprecedented fifty state sweep. But there are no ideal cases in either politics or war. This election is not about the best choice. It is about the only choice. In the best of all possible worlds, my support would go to Evan McMullin. But the threat Donald Trump presents to our national security and our internal liberties is too great to ignore.

One line from Clinton’s acceptance speech rings true: A man who can be baited (or recruited) by a tweet is not a man we can trust with Nuclear weapons (or much of anything else).