Here’s What Else We Should Be Remembering this 9/11

Anthony Toth is a writer and historian living in Arlington, VA. He is writing a biography of Beverly Eckert. 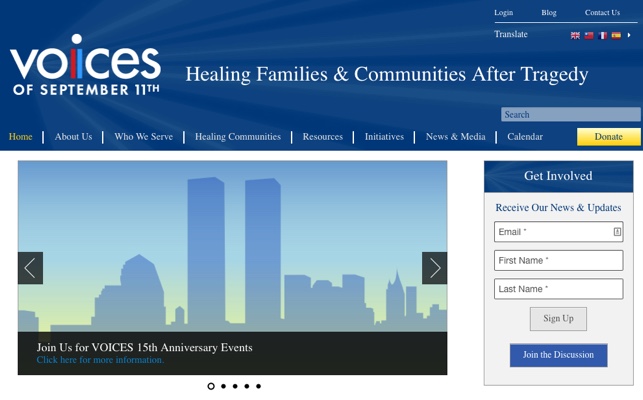 How do we remember that horrible day in September? In this most polarized of election years, most Americans do it by following the better angels of their nature.

Like any national crisis, 9/11 brought out the best in us: the shell-shocked, office workers with dust covered faces who helped each other limp away from the rubble that had once been the Twin Towers; the first responders, who lost so very many of their own but kept going, aiding the wounded and searching, in vain, sadly, for survivors in the smoldering toxicity of the crash sites; the thousands of men and women who rushed from all over the country to offer their cranes and trucks, their strong backs and giving hearts; the blood donors, the ones who put up flags, cared for the injured and traumatized, lit candles, prayed. Kindnesses flowed from everywhere, it seemed, to the wounded parts of America: New York City and Arlington, Virginia and Shanksville, Pennsylvania.

That moment of widespread unity and kindheartedness was real and it felt like the beginning of healing, but it didn’t last. From the White House on down to your street and mine, the big national group hug of 9/11 in many ways faded into our age-old divisions.

Vice President Cheney, his many allies and enablers, including President Bush, used this national trauma as a golden opportunity to carry out pet foreign and domestic projects, including the invasion of Iraq, the most disastrous executive decision in modern history. Their ‘War on Terror’ became the blanket justification for curtailing civil liberties, shoveling tax dollars into the pockets of profiteers, raining death on thousands of innocent civilians, and kidnapping, torturing and holding without trial suspected enemies. Those seeking the real origin of the Islamic State need look no further.

Meanwhile, our fellow Americans who were wired for intolerance and a desire for revenge felt free to let their demons roam, attacking American Sikhs because they looked like Muslims, spreading anti-Muslim rhetoric and violence, expressing the sort of xenophobia we see unleashed in this campaign by the Trumpists and their leader.

Getting less fanfare, though, were the many citizens who turned away from the darkness. Those who were closest to the losses caused by the fires of 9/11 were marked by the event most deeply. Some of these survivors and family members of those killed changed the courses of their lives in the days and months that followed. One was Beverly Eckert, whose husband, Sean Rooney, died in the collapse of Tower Two. I had met her in 2004 and we began a collaboration to tell her story. At one point, while talking about other 9/11 family members with whom she was working to pass 9/11 reform legislation, Beverly said that some in the group seemed to be motivated by anger, by a need to pin blame and extract revenge. Others, she said, sought real solutions to problems that had given rise to 9/11, and had an outlook of reconciliation, promoting peace, expressing love. Those better angels.

In 2016, thanks to the diligence, drive and heart of 9/11 family members and their many allies, that day of immense horror and loss is remembered in countless ways that express the best in who we are as individuals, as communities, as a country.

On this September 11th, most media attention is drawn to the three national memorial sites, which have been visited by millions, and which continue to grow and evolve. Like Gettysburg and Arlington, they have become hallowed places of pilgrimage, reflection and remembrance. The National Pentagon 9/11 Memorial opened on September 11, 2008. Fundraising and planning are underway for an educational and visitor center near the site. Where the Twin Towers of the World Trade Center once stood, the National September 11 Memorial was dedicated on the tenth anniversary of the attacks. The adjacent September 11 Museum opened to the public on May 20, 2014. The Flight 93 National Memorial, near Shanksville, was dedicated on September 10, 2011.

Out of the dust of the Twin Towers, hundreds of memorials have arisen, where smaller commemorations take place. The Port Authority of New York and New Jersey, owners of the World Trade Center site, preserved some of what was left behind after the site cleanup and investigations. Steel girders, vehicles, concrete slabs, part of a radio tower, all were once the debris of the disaster. Now they have become precious relics to help people remember that day. The Port Authority offered the items, which numbered 2,500 at the outset, to any organization that promised to use it in a permanent and public memorial to 9/11.

From the pain of shattered lives, dozens of groups and organizations were established by and for survivors, family members and others. In their time of loss, these people asked themselves: what now? The answer was to do good. Beverly Eckert and Mary Fetchet, who lost her son, Bradley, established Voices of September 11th, whose motto is “Healing families and communities after tragedies.” Other such organizations are Families of September 11, September Eleventh Families for Peaceful Tomorrows, September 11th Families’ Association and Tuesday’s Children. Every year, these groups hold events to help us remember, and each day of the year, they teach, comfort, counsel and care.

The well of compassion that was tapped on 9/11 and afterward has not run dry. A number of organizations promoting volunteerism and service were established, and in 2009 September 11th was proclaimed a National Day of Service and Remembrance. For many Americans, the memory of those lost is being honored by building homes, cleaning schools, fixing playground swings and feeding the hungry. This spirit of giving back is perhaps best exemplified by the group New York Says Thank You, which was established in 2003 at the suggestion of a five-year-old boy to repay the generosity of kindness of Americans when the people of New York City faced their gravest hour.

The unique events of 9/11 have given rise to special ways of remembering. Some communities hold stair climbs to honor the memory of firefighters who rushed toward danger to save lives. The rituals followed at the National 9/11 Memorial on each anniversary have been adopted in other ceremonies -- the reading of the names, the moments of silence, the tolling of the bell. Some towns hold running races, others remember by gathering together in town squares, fire stations and churches.

One of the great untold stories of the post-9/11 era is how Americans have found ways to become more mindful of our gifts, more appreciative of our loved ones, more nurturing of our communities. In millions of ways, the spirit of 9/12 has moved people to care for the needy, comfort the victim, build stronger communities and welcome the stranger.

Today, toxic political winds carry calls for exclusion, hatred, discrimination and fear. We already know what happens when we go down that path. Better to take a moment to honor the memory of those who died on 9/11, and take to heart the best lessons of 9/11.