by Albert I. Slomovitz

Albert I. Slomovitz is an Assistant Professor of History, Kennesaw State University. 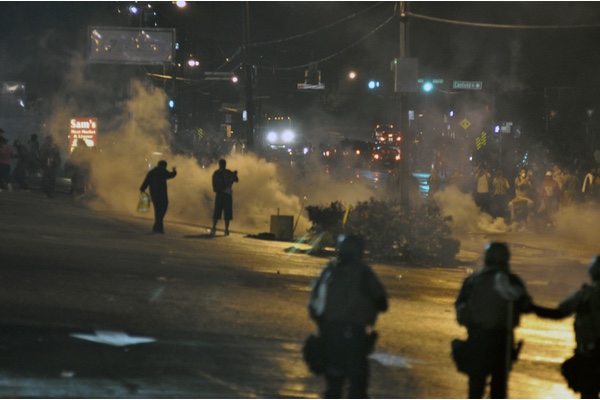 Police officers using tear gas during the first wave of the Ferguson protests, By Loavesofbread - Own work, CC BY-SA 4.0

When I ride, I am vigilant and prepared for anything and everything. As a volunteer police chaplain with the Cobb County Police Department in Marietta, Georgia I participate in ride-alongs with officers on a regular basis. My role is clear: I am not a member of law-enforcement and I carry no weapon. If we can be of assistance with a word of comfort or counsel to the officer or citizens, that is our role.

Experiencing these ride-alongs over the years has given me some insights about law-enforcement. First, is that you are never certain what awaits you when you roll up to a situation or pull someone over in a routine traffic stop. Most times, things go as you might expect. However, there are times when people act unexpectedly for a myriad of reasons, some logical, some not. The second insight is that the amount of time for things to escalate can literally be seconds. Imagine that the police arrive at the height of an emotional encounter or the person is on drugs or drunk or has just committed an illegal offense. Police often have to make split second decisions that have great consequences. A final insight is how different police officers are. They have various hobbies, concerns and life-interests that are often shared on these ride-alongs. Their overall goals are to serve the public with integrity and to get home to family and friends.

Yet, these goals are increasingly more difficult to attain due in large part to the frustration in the black community. As was reported recently in Baltimore, there have been systemic instances of prejudice and discrimination directed toward people of color. This phenomenon has been described as, "driving while black." This type of prejudice can cause peaceful citizens to become contemptuous and disrespectful of police officers. In many instances, it is considered breaking an unspoken code to speak with the police, much less cooperate with them. Policing communities effectively will become an almost impossibility and all involved will lose. We must search for viable solutions quickly! As a retired military chaplain and a current Professor of American History, there are lessons to be learned before we achieve any workable results.

First, let's acknowledge that prejudice exists in abundant amounts in America. For much of our history, the instances of prejudice toward people of color and many others was very apparent. While the Civil War ended in 1865, the battles regarding prejudice still raged. By the 1890's and onward, the Jim Crow era swept across the country. Blatant segregation in almost every area of life became the standard for much of America. The Klan began reasserting its influence at this time as well. Lynching became a fact of life in America. By 1915, the movie, Birth of a Nation, endorsed by President Woodrow Wilson was shown at the White House and across the nation. One of its main themes was a glorification of the Klan and its role in the South.

Quite often, Klan violence was done in coordination with local law enforcement. In 1946, for example, a black, decorated World War II newly discharged veteran, Sgt. Isaac Woodard, was brutally beaten by policemen in South Carolina. As a result, he was blinded in both eyes and suffered life-long partial amnesia. His offense had been disregarding the commands of a bus driver who had forbid him from using a segregated restroom. It is appropriate to recognize this prejudice in its fullness.

In the same instance, it is fair to note that there is a built-in resistance in many black neighborhoods to cooperate with law-enforcement. This resistance is multi-leveled and deserves examination. Almost 30 years ago, the rap-group NWA introduced a popular song whose lyrics are self-explanatory. The rap's title is "F--- the Police." A few verses express its sentiments. "F-- the police coming straight from the underground, A young nigga got it bad cause I'm brown, And not the other color so police think they have the authority to kill a minority, F-- that sh--, cause I ain't the one." This section of the rap ends with this sentence, "And when I'm finished, it's gonna be a bloodbath of cops, dying in L.A. Yo Dre, I got something to say."

These verses are examples of a generational opposition for many in the black community being willing to work with or respect those in law-enforcement even when this would be beneficial for their neighborhoods. It is clear that there are legitimate concerns on both sides. Yet, when all is said and done, citizens must respect the police and cooperate with them. Our society functions because we all agree upon common rules and behaviors. Without this acceptance of social norms and roles, we run the risk of a cultural breakdown. In fact, one might suggest that unless we address this major problem in our society that it will tear the very fabric of America. Indeed, one could argue that this breakdown is occurring in major cities across America, such as Chicago, that have experienced extremely high rates of violence over the past years.

There is, however, a way forward. When President Harry S. Truman became aware of the racial incidents that occurred in America, such as that of Sgt. Woodard after the Second World War, he created a government entity to address the issue. In December of 1946, Truman implemented "The President's Committee on Civil Rights." Within a year, this organization issued recommendations that directly influenced the President and Congress. These proposals helped lead the way for the integration of the armed forces in America, which had been segregated. This integration would be a factor in the 1954 Brown v. Board decision which began to reverse 60 years of "separate but equal," in America.

With respect, I would urge the President to appoint a similar committee in the coming months. This group would hopefully engage the police, neighborhood leaders, academics, clergy and more. Its mandate would be to develop concrete ideas whose sole purpose would be reducing the long-standing animosity that exists between law-enforcement and others. Indeed, there are issues such as poverty, educational opportunities, breakdown of the family and gang-violence that are all connected to this topic. This is no easy task.

As a retired military chaplain who has done decades of counseling, I know that we need to sit together, face to face, express our feelings and thoughts before we move to recommendations. The pain and bad-experiences that people have encountered as citizens or police officers need to be heard and acknowledged. I'm certain such a Committee would come up with creative and insightful recommendations that would make policing easier for the police and citizens. Perhaps this Committee can create You Tube videos, which suggest ways that people and citizens can better interact. Perhaps it is time for a new rap song that praises our brave police men and women. At the same time, every law-enforcement person should be knowledgeable about past atrocities carried out by those who wear the badge. In the interim, I will continue my ride-alongs and pray for quiet and safe patrols for all.