Psst! Hillary. Gracie Allen Has Some Free Advice on Running for President.

Greg Bailey is a St. Louis based history writer. His first book The Voyage of the F.H. Moore and Other 19th Century Whaling Accounts was published in 2014. He is currently writing a book on an event in Illinois history. 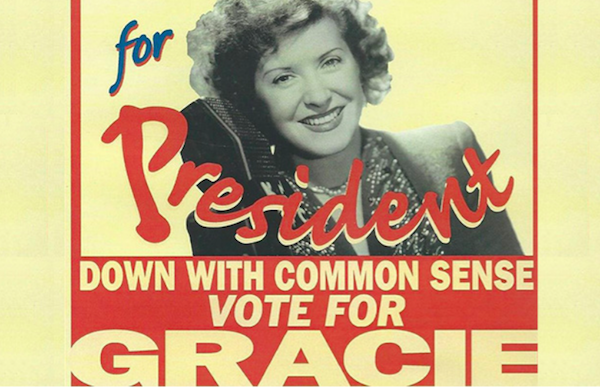 As Hillary Clinton becomes the first female presidential nominee of a major party she and her supporters can learn from an earlier, although unlikely, contender. Comedian Gracie Allen made her run for the White House in 1940. Before political correctness and the restraints of federal election laws that prevented Stephen Colbert from running, entertainers from Will Rogers to Pat Paulsen ran for president. But no one was funnier or more prophetic than Gracie Allen.

Along with her husband and partner George Burns, Gracie Allen was one of the most successful people on radio and film. Allen was a very intelligent woman who excelled at playing dumb with fractured logic and word play.  “Presidents are made, not born,” she said. “It's silly to think that Presidents are born, because very few people are 35 years old at birth, and those who are won't admit it.”

Allen announced her campaign in March on the Burns and Allen radio show that reached millions of homes each week. She decided to run as the candidate of the Surprise party, because as she said her father was a Republican, her mother was a Democrat and when she was born she was a surprise.   Soon she started walking in on other radio programs to deliver speeches.

As one of the first women running for president she addressed the gender issue head on. “The Constitution doesn't say anything about 'he' or 'him'; it refers only to 'the person to be voted for.' and if women aren't persons, what goes on here?”  Women, she said, were “getting very tired of running a poor second to the Forgotten Man, and with all of the practice we've had around the house the time is ripe for a woman to sweep the country.”

“I'll make a prediction with my eyes open: that a woman can and will be elected if she is qualified and gets enough votes.”

As part of the campaign she wrote a short book “How to Become President.” In it she reprinted her stump speech. “This is the greatest night of my life. How glorious it is to be here among my friends, for you are my friends, at least until the election, in this fair city of _________, the garden spot of the great ___________ (APPLAUSE) I can say in all truthfulness that when I last tire of the mad whirl of modern life and want to find a place to die in, this is it.”

She had further thoughts on speechmaking, addressing a yet unborn Donal Trump. “Don't try to impress your audience. Act like you don't know what you're talking about, then they won't think you're too smart for them. Fumble a word once in a while; the audience will yell it up to you and will thus have the thrill of being in on things. When the word is something like 'fiduciary' or 'incontrovertible,' you will be glad you got them in the habit of helping.”

Imagining her first days as president she had some advice Hillary Clinton may find useful.There would be no job for George Burns or “mister Allen.“  “I don't think it's dignified for the President's husband to work. People would begin whispering that I couldn't support him, and anyway, now that I'm making good money it's high time he took things a little easier. I'll even send out our dirty linen.”

Gracie Allen had other useful advice from the art of shaking hands to how to build a strong platform. On negative campaigning she counseled “if your opponent is young, call him a student of politics, because everybody knows the way things are what we need is a graduate. If he looks too honest call him a visionary or a reformer: and if he smarter than you you can work wonders with such things as 'crafty' and 'clever.' Say he rented his children from the pound, and that if elected he'll close all the banks just because his brother-in-law is overdrawn $3.85. Just do others as you would hate to have them do to you, and it's in the bag.”

At the invitation of Eleanor Roosevelt Gracie Allen appeared at the Women's National Press Club in Washington D.C. “Now that I think of it, have you ever considered what a great President Mrs. Roosevelt would make? It's not just her charm and personality. She has the intellect, tact, humor and a keen sense of her responsibilities to ---but wait a minute! Who am I campaigning for: Mrs. Roosevelt or me?”  Allen used the occasion to announce the Surprise Party convention in Omaha and a whistle stop train tour.

Flanked by George Burns and  Laura the stuffed kangaroo, the Surprise Party's mascot, Allen set off from Hollywood to Omaha. At Creighton University she was unanimously nominated by a cheering crowd. There was no vice president candidate because Gracie promised there would be no vice in her administration.

Gracie Allen did win one election that year. The voters of Monominee, Michigan elected her mayor but promptly disqualified her for being a non-resident. In the fall she did receive a handful of write in votes for president. Burns and Allen eventually moved their radio show to television. After Gracie's untimely death in 1964, George Burns found a new career in films but he never filled the gap left by Gracie. He died at the age of 100 and was interred beside Gracie.  The bronze plaque on the mausoleum says it all:“Gracie Allen and George Burns--Together Again.”