Why Historians Have an Obligation to Speak Out Against Trump

James C. Cobb is Spalding Distinguished Professor of History, Emeritus, at the University of Georgia and a former president of the Southern Historical Association. 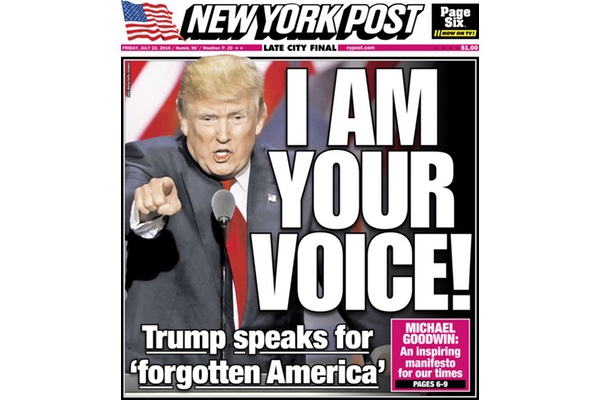 Related Link What People Are Saying about "Historians Against Trump"

In their “Open Letter to the American People,” released last week, a group called “Historians Against Trump” declared that “the lessons of history compel us to speak out against [Donald] Trump.” Their motives, they insisted, were not partisan in the least, but rather they were simply a collection of school teachers, public historians, and graduate students united by their common conviction “that the candidacy of Donald J. Trump poses a threat to American democracy.” There followed an indictment whose list of particulars gave no hint of academic expertise but could have been assembled by anyone who owns a television or computer, much less reads a newspaper now and then. Yet the statement suggested that a well-defined professional skill set left its historian-signatories well equipped to topple the Trump campaign and build “an inclusive civil society in its place.

As is frequently the case with letters or other statements drafted by a committee whose members are passionate about the rightness and importance of their cause, this one occasionally waxed a bit grandiose in some of its language and imagery. In this and the exposure it received, the historians’ impassioned missive amounted a big, fat, hanging curveball tossed squarely in the wheelhouse of none other than the switch-hitting, language-bending, career-contrarian critic of practically everything, Stanley Fish. Once tagged, ironically enough, as “the Donald Trump of American academia,” in his early incarnation as a literary theorist and campus wheeler-dealer, this “brash, noisy entrepreneur of the intellect,” seemed to stoke much the same public outrage against the Academy that the shape-shifting Fish now undertakes to exploit himself, courtesy of the bully platform afforded him by the New York Times.

At any rate, the historians’ “open letter” afforded an irresistible opportunity for Fish to do precisely what he loves best, i.e., play word games, preferably, as in this case, with unsuspecting adversaries. For example, mocking the writers’ insistence that “as historians, we consider diverse viewpoints while acknowledging our own limitations and subjectivity,” he found “very little acknowledgment of limitations and subjectivity” in their apparent conflation of “political opinions” with “indisputable, impartially arrived at truths,” as in: “Donald Trump’s presidential campaign is a campaign of violence: violence against individuals and groups; against memory and accountability; against historical analysis and fact.” “How’s that,” Fish asked, “for cool, temperate and disinterested analysis?”

Possibly a bit juiced by his merciless flaying of yet another offending text, Fish went on to boldly declare that historians “are wrong to insert themselves into the political process under the banner of academic expertise.” He may have barely worked up a sweat in puncturing the presumptuous rhetoric of writers whose zeal may have occasionally run roughshod over their discretion, but he was not exactly free from presumption himself when he lectured the parties to the document on the actual nature of their job, which is, to wit: “To teach students how to handle archival materials, how to distinguish between likeable and unreliable evidence, how to build a persuasive account of a disputed event, in short, how to perform as historians, not as seers or gurus.”

Not surprisingly, like many academics, some historians have taken none too kindly to being told where “their competence lies” or having the parameters of their discipline defined by someone who is neither a fellow practitioner nor much of a fan of parameters himself. Taken at face value, this little interdisciplinary dustup might seem at first glance like little more than simply another tempest in the faculty lounge teapot, and a largely contrived one at that. I no more believe that the overwhelming majority of the people who signed on with “Historians Against Trump” really meant to suggest that their academic credentials entitle them to speak more authoritatively on current affairs than others—nor do I believe that Stanley Fish actually believes it either—than I believe that either Fish or anyone else can make a legitimate argument that those credentials should inhibit such activity. Even if, as I suspect, this latter suggestion was offered largely as a deliberate provocation, it requires at least something of a response because, regardless of the trappings in which it might be delivered, we have never been in more urgent need of historically informed social and political commentary than we are right now.

Though they are certain to face accusations of favoritism from one side or the other if not both, historians who venture into these waters incur no obligation to the candidates themselves. If they have done their dead-level best to offer their readers a balanced, detached view of relevant historical phenomena from which they may reach their own conclusions, scholars are not party to partisanship simply because the implications of their work prove more favorable to one aspirant than the other. The matter of what parts of the past are deemed relevant will inevitably be shaped in large part by the candidates’ positions on the most salient issues of the campaign, although the obvious concerns that go largely unaddressed in the partisan sphere are still fair game in the historical arena. For example, the effects of the high tariff policies of the 1920s in fostering and exacerbating economic distress at home and abroad clearly deserve attention in light of Donald Trump's apparent disposition to protectionism in some form and circumstances. On the other hand, however, there is the equally critical issue of already enormous and still widening gaps in wealth and income that were generally blown off by the Republican administrations of the pre-Depression era and, though they loom equally portentous today, still seem closer to the margins of the current campaign than the core.

Clearly, candidates who embrace what are perceived to be extreme positions are inviting the most expansive examination of their historical antecedents, and this year's GOP nominee is no exception. Flipping through the pages of American history, it is pretty hard to find much of an upside to recurrent appeals to xenophobia, which have never ended other than badly, either for the demonized immigrants themselves or for the nation as a whole. When it comes to the politics of fear and guilt by association and innuendo, Donald Trump may still be a dive or two shy of plumbing the depths reached by red-baiting Wisconsin Sen. Joseph McCarthy in the 1950s, but it is hard to imagine McCarthy resisting a knowing wink at Trump's suggestion of a link between Sen. Ted Cruz's father and Lee Harvey Oswald.

Trump's unfiltered addiction to the spotlight virtually mandates a search for his personal and policy precursors. This does not mean, however, that Hillary Clinton, who has, for obvious reasons, sought aggressively to minimize the exposure of her past, has earned any reprieve from the historical third-degree. Clinton, for example, has been more circumspect in her attitude toward recent controversial free-trade agreements like TPP, but like her husband, she should forever bear the yoke of the hideous NAFTA treaty, which ruined the lives of thousands of U.S. textile and apparel workers, devastated their communities, and left them crippled in their efforts to recover. Though Clinton has tried to distance herself from NAFTA, President Obama was on the mark back when he quipped that she said “great things about NAFTA until she started running for president.” It is also worth noting that Hillary's email fiasco is hardly the first manifestation of an obsession with secrecy and a desire to use it for political protection and aggrandizement. If you don't find this a troubling inclination for a presidential candidate, then you're either too old or too young to remember Watergate and the national trauma it inflicted.

Anyone cognizant of historical processes and the critical importance of the discrete contexts in which particular events and trends have played out also understands that such comparisons and analogies should be advanced as cautiously by scholars as they are received by readers. Proceeding cautiously, however, is not the same as proceeding timidly, and in this case, it is eminently preferable to not proceeding at all. Stanley Fish and others may well be content to give the last word to the old duffer in the New Yorker cartoon who allows that while “Those who do not study history are doomed to repeat it. . . . Those who do study history are doomed to stand by helplessly while everyone else repeats it.” I trust, however, that the great majority of my colleagues will agree that no one who is possessed of a genuine historical consciousness is by any means “helpless,” much less “doomed”— or perhaps even entitled — to simply “stand by” and allow whatever lessons the past affords to go not just unheeded, but unheard.