This page, featuring quotes from other websites, highlights fun and interesting developments in pop culture."
Curators at the "New Museum" have created an exhibit with over 4,000 objects that examines the various ways we collect and own items.
“The Keeper,” the New Museum’s summer show, a four-floor exhibit that opens on Wednesday, July 20, is a museum blockbuster of a different kind.
With over 4,000 objects representing more than two dozen collectors, including contemporary artists making art conceived by collecting, Massimiliano Gioni, the museum’s artistic director, and his team of curators have mounted a remarkable series of object lessons about what it means to “keep,” the relationship of possession to loss, the madness inherent in love, and the undeniable importance of the individual’s voice in recording and interpreting history and its sweep.
“The Keeper” is its own cultural crowdsourcing, including Korbinian Aigner’s postcard-size still lifes of fruit, painted by Mr. Aigner, a German Catholic priest, while interred in the Dachau concentration camp, where he cultivated apples until his escape. Also on view are 3,000 photographs of people with their teddy bears, assembled by Ydessa Hendeles, a contemporary Canadian artist.

The Mirrors Behind Rembrandt’s Self-Portraits
At age 18, Francis O’Neill, an aspiring young painter, went on a train trip around Europe and was struck by the Rembrandt masterpieces he saw in galleries. Like many before him, he was astounded by Rembrandt’s technical accuracy.
“I thought, ‘What sort of magic has this guy imbued in himself?’ ” said Mr. O’Neill, who today produces art and teaches from his studio in Oxford, England.
Now, Mr. O’Neill thinks he’s found an answer to that question — and he says it has more to do with optics than magic.
In a paper published Wednesday in the Journal of Optics, Mr. O’Neill lays out a theory that Rembrandt set up flat and concave mirrors to project his subjects — including himself — onto surfaces before painting or etching them.
212 Slaves Died on the São José Ship; This New Exhibit Will Share Their Story
The first items recovered from the sunken slave ship have arrived in Washington, D.C., and will be displayed at the Smithsonian’s National Museum of African American History and Culture.
Paul Gardullo lifted an iron ballast from a Portuguese slave ship that sank in 1794 out of a crate Wednesday morning and hefted its weight in his hands.
“Anytime I come into contact with the objects from the São José, it’s an incredibly moving experience,” said the curator of the Smithsonian’s National Museum of African American History and Culture. Artifacts from the São José–Paquete de Africa arrived Wednesday at the museum’s storage facility after a research-and-recovery project that’s been going on since 2010.
The long, rectangular ballasts, used to hold the ship down, offset the weight of its human cargo and kept it balanced in the water as it carried 512 enslaved Mozambicans across the sea.
JFK Jr Sent Clinton a Note During Lewinsky Scandal
Paul Begala told People magazine that John F. Kennedy Jr. sent Bill Clinton a fax during the height of the Monica Lewinsky scandal.
It read: “Dear Mr. President, I sat under that desk – there’s barely room for a 3-year-old, much less a 21-year-old intern. Cheers, J.K.”
Said Begala: “I showed the President and he laughed his butt off. It was so gutsy. And he was the perfect person to bring a little levity.”
'Hamilton' cast to raise funds for Clinton with extra show
Hillary Clinton's presidential campaign is hosting a special performance of the Broadway smash hit "Hamilton: An American Musical" as part of a joint fund-raiser for the campaign and the Democratic National Committee.
The campaign has rented every seat in the 1,300-seat Richard Rogers Theatre for the extra performance, according to a campaign aide. Tickets to the July 12 show range from $2,700 for general admission to $100,000, which includes two premium seats with the candidate and an invitation to the Democratic National Convention in Philadelphia. 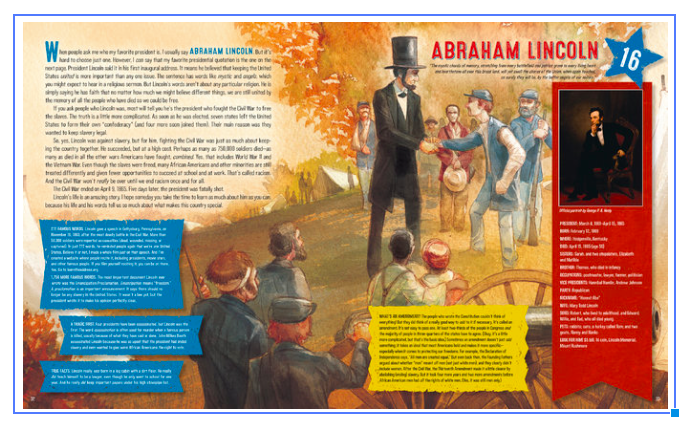 NYT says Ken Burns’s children’s book is good, but ...
“Grover Cleveland, Again!,” an oversize reference book by the renowned documentarian Ken Burns, energetically works its way through the American presidents up to Obama. It offers Burns’s trademarked accessible, conversational style of history. Each president gets a two-page spread that often prods readers to picture themselves in his shoes. “Ever wonder what you’ll be when you grow up? How about a writer, inventor, architect, scientist, botanist, philosopher, musician, historian and president of the United States?” begins the entry on Jefferson. Burns is forthright about his opinions, letting us know where he sees greatness and mediocrity. When people ask him his favorite, “I usually say Abraham Lincoln,” he offers.
Burns says he wrote the book because he used to play a memory game with his own daughters that worked through the presidents in order — Cleveland had to come twice and so became a joke among them — and he promised them 30 years ago he’d do a kids’ book about the presidents. Unfortunately, his gee-whiz tone can seem like someone who hasn’t talked much to an actual child in some time, and he is oddly squeamish about the darker presidential facts, considering his middle-grade audience. There is no mention that Washington was a slaveholder, for example, and he lists all the children of each president but leaves out Jefferson’s children with his slave Sally Hemings (one of whom, James Madison Hemings, is the subject of a picture book coming out this fall, intended for even younger readers). There is a hopelessly vague moment in the spread on Bill Clinton, whom he presents as a successful chief executive — “The things people care about most got better” — whose presidency was marred only when he was “accused of lying about something in his personal life.”
But these quibbles aside, with Kelley’s sweeping art setting a scene for each president and sidebars offering biographical facts along with a couple of telling or simply amusing anecdotes (Taft was the first president to throw out the ball on opening day of the baseball season; when Nixon was a teenager, he had to wake up at 4 a.m. to drive to buy vegetables for his family’s grocery store), the effect of the whole is stirring enough to stoke and satisfy curiosity.
Seattle Artist Natasha Marin Launches "Reparations" Website
On July 15, Natasha Marin, a conceptual artist living in Seattle, started a Facebook group called Reparations. Yesterday, the group bloomed into a website. In the "about" section, Marin describes Reparations as a "social media experiment" that will last through the end of the year
The way it works is pretty straightforward. A person of color makes a request, and a white person can elect to fulfill that request. Some requests so far include a man named Kito asking for money to buy a service dog to help manage his mental health issues, a person named Osiris requesting an angel investor to help them get their business off the ground (or, failing that, a networking dinner with someone who could help in some way), a person named Ana who wants rent money and/or a Chakra cleanse, and a man named Mike who just needs some food.
Alternatively, a white person can offer a service or good, and a person of color can choose to accept it. Local poet and teacher Tara Hardy is offering a free workshop for artists of color who would like to "make a living by going on tour." Karyn Schwartz of Sugar Pill, an apothecary on Capitol Hill, can provide "herbal & natural well-being consultations, classes/workshops for groups on natural strategies for stress management, and free flower essence formulas for additional support."
New Exhibition Honors Gay Movement Pioneer Dr. Magnus Hirschfeld (1868-1935)
This year marks the 85th anniversary of Dr. Magnus Hirsch­feld's visit to San Francisco. Starting in the late 1890s, Hirschfeld was a groundbreaking defender of homosexual and transgender peo­ple in Germany and beyond. He was internationally renowned as a founder of the Scientific-Humanitarian Committee, the world's first homosexual advocacy group, and as creator of the Institute for Sexual Science in Berlin. Both organizations were banned when the Nazis came to power in 1933. Hirschfeld died in exile three years later.
In a new exhibition opening on August 19, the GLBT History Museum offers an introduction to Hirschfeld's life, work and legacy. "Through Knowledge to Justice: The Sexual World of Dr. Magnus Hirschfeld (1868-1935)" features first editions, vintage periodicals and ephemera largely drawn from the collection assembled by curator Gerard Koskovich over the past three decades. In addition, the exhibition will include historic film documenting Hirschfeld's impact and the fate of his work.
"Although the Nazi regime did its best to erase the memory of Hirschfeld and his contributions, it didn't succeed. We remember Hirschfeld today not only because he helped found the movement to defend LGBTQ people more than a century ago, but also because his work as a sexologist was prescient," Koskovich said. "With its emphasis on 'sexual intermediacy,' Hirschfeld's thinking prefigures contemporary ideas about the continuum of sexual orientation, genderqueer expression and sexual fluidity."
comments powered by Disqus