Daniel Lazare writes for a number of websites and publications.  His latest book is The Frozen Republic: How the Constitution is Paralyzing Democracy (Harcourt Brace). 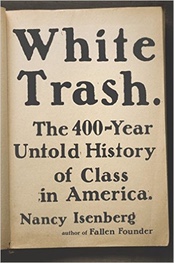 Thanks to Bernie Sanders and a growing wealth gap, 2016 will go down in history as the year the United States discovered class.  Or maybe it should be “re-discovered” since previous generations were all too aware of the chasm between rich and poor.  But beginning in the 1950s, differences seemed to fade as Americans entered the great middle class. Sure, there were nerds, jocks, prom kings, and drama queens.  But everyone ate at the same diners, lived in the same split-level suburban homes, and went to the same schools.  No one ever came up short when it came to cars, clothes, or cash.

Or so it seemed.  Two decades later, America is a very different place. Wages are stagnant, homelessness is rising, while the labor participation rate, the broadest measure of employment, has been drifting steadily downward since the 1990s.  As the economy weakens, class differences are opening wider and wider.  Somehow, American doesn’t seem to be an endless John Hughes movie any more.

This is what makes Nancy Isenberg’s new study, White Trash: The 400-Year Untold History of Class in America, so valuable.  It not only takes aim at the notion of America as a place of endless progress, but at a sub-myth as well, that  poverty is a problem limited to blacks, Hispanics, and other racial minorities.

To the contrary, Isenberg argues that America since its inception has seen the growth of a white underclass that is every bit as impoverished as such groups, if not more so.  The classic example, she writes, is Bob Ewell, the white bigot in Harper Lee’s To Kill a Mockingbird, who accuses a black man of raping his daughter and then tries to kill Atticus Finch’s two children after Atticus defends him in court.  Lee describes Ewell and his family as a creature of the margins: “No truant officer could keep their numerous offspring in school; no public health officer could free them from congenital defects, various worms, and diseases indigenous to filthy surroundings.”  Ewell, Lee adds, lives in a run-down shack that was “once a Negro cabin.”  Garbage is everywhere, and no one knows how many kids he has – some say six, some nine.  All they know is that they’re the “dirty-faced ones at the windows when anyone passed."

These were the monsters that middle-class America tried to repress from mid-century on.  Isenberg traces them back to the colonial period when, paradoxically, a land-rich country began filling up with the un-propertied poor.  Of the 36,000 people who lived in North Carolina as of 1729, for instance, Isenberg estimates that a majority owned little land or none.  Many such rejects settled in the Great Dismal Swamp, a thousand-plus square miles of wetlands on the border of Virginia and North Carolina.  An Anglican minister complained in 1709 that the swamp dwellers were “so careless and uncleanly” that there was “little difference between the corn in the horse’s manger and the bread on their tables.” William Byrd II, a wealthy landowner who was appointed to survey the area in 1728, dismissed them as lazy no-accounts who prefer to “loiter away their lives, like Solomon’s sluggards.

Not once did it occur to Byrd that the slave owners like himself who were busily monopolizing the best land for themselves had anything to do with the growing numbers struggling to survive in sandy areas and pine barrens.  Thanks to the cotton boom, “sandhillers” and “pineys” were in event worse shape a century later.  Travelers described a rural population that was ragged and emaciated with children who, in Isenberg’s words, were “prematurely aged and deformed with distended bellies.”   A pamphleteer named George Weston wrote in 1856 that poor whites were “sinking deeper and more hopelessly into barbarism with every succeeding generation” while Harriet Beecher Stowe painted a vivid portrait of de-humanized country folk in her novel Dred, written three years after Uncle Tom’s Cabin:

"Crouched on a pile of dirty straw, sat a miserable haggard woman, with large, wild eyes, sunken cheeks, disheveled matted hair, and long, lean hands like bird’s claws.  At her skinny breast an emaciated infant was hanging, pushing, with its little skeleton hands, as if to force nourishment which nature no longer gave; and two scared-looking children, with features wasted and pinched blue with famine, were clinging to her gown.  The whole group huddled together, drawing as far as possible away from the newcomer, looking up with large frightened eyes, like hunted wild animals."

Today, we can imagine nothing more degrading than slavery.  Yet writer after writer described a poor white population that had actually plunged several steps below.   Slaves derided them as “stray goats” begging for food or supplies while wealthy planters humiliated them by requiring them to use the back door.  White laborers worked day and night alongside slaves for paltry wages at harvest time or dug ditches, paved roads, and engaged in other ill-paid, back-breaking labor in places like Baltimore and New Orleans.  In 1865, a Union chaplain predicted that “the war against the Aristocracy” would not only free the slaves but would “knock off the shackles of millions of poor whites, whose bondage was really worse than the African.”

Others were not so sure.

Marcus Sterling, a Union army officer who worked for the Freedman’s Bureau after the war, wrote in 1868 that while ex-slaves were becoming “more settled, industrious and ambitious” and were hungry to learn how to read and write, the “pitiable class of poor whites” was beyond reach, the “only class which seems almost unaffected by the [bureau’s] great benevolence and its bold reform.”

Much of the problem was animosity left over from the war.  After all, blacks were pro-Union while many whites still seethed over their loss. Animosity intensified during the battle over Reconstruction when a newly reconstituted white ruling class set about revenging itself on ex-slaves and Radical Republicans wondered why a victorious Union didn’t care that its most ardent supporters were being deprived of the vote.  Why should the government “disenfranchise the humble, quiet, hardworking negro,” demanded a writer for the Atlantic Monthly, while leaving the vote in the hand of the “worthless barbarian,” i.e. the “ignorant, illiterate, and vicious” white poor.

So the battle line were drawn, lines that remain as sharp as ever in the Age of Trump.  Isenberg, a historian at Louisiana State University and the author of Fallen Founder, a biography of Aaron Burr, paints a portrait of a class that has been rejected, left out, condescended to, and branded an enemy of progress and equality.  White Trash is a terrific read – vivid, lively, and unsparing.  There are even a few laugh-out-loud moments, i.e. the notion, popular in the 1920s, that Harvard men constituted an “aristogenic” elite.

Still, her account is not without certain problems.  She treats class in relatively static terms as largely applicable to poor whites and hence has little to say about how black people fit in, how they interact with poor whites, or what the white ruling class is up to as well.  She notes that Elvis Presley, a poor white kid from Tupelo, Mississippi, “openly embraced black musical style, black pompadour hair, and flashy outfits that had been associated with blacks as well.”  In fact, Presley encountered resistance in his early years because country-music fans thought he sounded too black while black R&B radio stations thought he sounded “too much like a hillbilly.”  In fact, he represented something entirely new, an amalgam that was nothing if not complex.  Isenberg is interested in race and class, but doesn’t fully explore the surprising ways in which those two categories often interact.