William N. Goetzmann is the Edwin J. Beinecke Professor of Finance and Management Studies at Yale and the Director of the International Center for Finance. His latest book is Money Changes Everything: How Finance Made Civilization Possible (Princeton University Press, 2016). 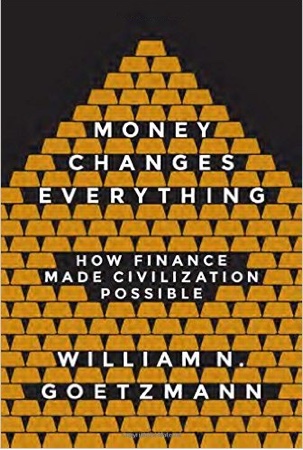 In recent years, finance has taken a lot of criticism. Witness the passionate but unfocused demands by Occupy Wall Street in 2011, the recent calls by presidential candidates to “break up the banks” and Brexit’s thumb in the eye of London financiers. As current as these events seem, history tells us that criticizing finance and seeking to control it is as old as civilization itself. In the 24th century BCE Sumerian King Urukagina instituted a number of populist reforms in the city of Lagash, the first of which was financial: he “ freed the inhabitants of Lagash from usury.”

It is no coincidence that 4,400 years ago the world’s first cities had financiers. Financial tools serve the complex, inter-temporal needs of urban society. Our ambiguity about finance – the need to reign it in, as well as the need to constantly develop it – derives from its great power as a technology. It is a constellation of tools, techniques and institutions that addressed the fundamental problems that emerged with the increasing complexity of human society. As the world changes, finance adapts.

For example, even as we debate the relevance and usefulness of traditional financial institutions such as banks, another revolution is underway in the world of money. A mere decade after we thought we had mastered the intricacies of asset securitization, shadow banking and credit default swaps, an entirely new financial phenomenon has emerged. It is called FinTech – short for financial technology. FinTech involves the plumbing and wiring of the financial system. It is changing how we borrow, how we save, how we raise money for companies even how we assess our future; its possibilities, risks and relationships.

Some of these innovations you may already know: PayPal, Bitcoin, Financial Engines, Kickstarter, Prosper.com and Venmo. They are apps, payment systems, crowdfunding vehicles and peer to peer lending sites. Their use has spread rapidly along with other technological improvements in how we get things done. However these companies are the tip of a very large iceberg.

Many of the innovations in finance are buried in the complex, business to business infrastructure of the economy. These include new ways of detecting fraud, recording transactions, routing orders, valuing assets and even discovering hidden patterns in big data; massaging the fast, continuous flow of news, trades, tweets, satellite images, and Facebook posts. Financial companies – from the big players like Goldman Sachs and Blackrock down to your local bank and financial advisor believe FinTech will fundamentally alter their businesses -- and they are rushing to get out ahead of competitors. This is because FinTech innovation tends to disrupt the existing structure. It disintermediates customers and providers of financial services, replacing them with peer-to-peer lending, instant money transfers, loans without loan officers, and investment without investment banks. These innovations are transformative, empowering and create a new infrastructure for exploring even greater opportunities but they threaten the status quo in ways that the securitization wave of the 2000’s never approached. Securitization mostly involved the same big players that ruled the markets in prior decades. FinTech brings a different cast of characters who are defining new communities of investors, new sources of knowledge and unfortunately new kinds of scams and risks. The top FinTech companies today include a lot of new names. How many of us have been following the likes of Credit Karma, Market Axcess, Square, Stripe and SoFi?

While it may seem new, the FinTech revolution has actually been with us for a long, long time. The first FinTech appeared 5,000 years ago with the invention of writing on clay tablets in the ancient Near East. The world’s first written language – cuneiform – was invented for financial record-keeping, accounting and contracting. It arose in the first big cities in what is now Iraq. These urban societies had to solve complex economic problems such as feeding large populations, coordinating labor with specialized skills and trading great distances for essential commodities.

These problems required planning for the future. The world’s first FinTech developed from an accounting and contracting system into a tool of sophisticated communication and analysis precisely to address the complexities of a new way of living – cities in which it was impossible to know and trust everyone; where people had to rely on others for daily food supply, and where the specialization of tasks and trade all but eliminated the possibility of self-sufficiency. Evidently, financial tools such as money lending also led to serious social tensions as well. Urukagina’s freeing of the people of Lagash from moneylenders may have been literal. Debt-slavery was common in ancient Mesopotamia.

The essence of finance is the transfer of value through time and the re-organization of risk. Finance is a time machine – a tool of the fourth dimension. Large-scale urban society demanded new kinds of systems; not just canals, pottery and bronze weapons but ways to plan and contract for future needs, a means of taxation and markets for goods and labor. The ancient Mesopotamians invented tools for all of these things and more. The tools of finance included writing, mathematics and money, what I call the hardware of financial technology. It also demanded software – the abstract conceptualization of time and risk in forms that did not exist before. Financial thinking was an “add-on” mode of thought that still feels a bit uncomfortable to many of us today.

Financial history over the 5,000 years since its invention tells us the how and why of FinTech revolutions. When society changes in fundamental ways its financial infrastructure has to catch up. For example, the first stock market was the Amsterdam Exchange in the early 1600’s. Brokers traded shares in the Dutch East India Company – a strikingly innovative business that transformed the Netherlands into a global maritime empire. The trade in its shares became a way for the Dutch to broadly distribute the benefits of the new trade with Asia. Dutch society literally “bought-in” to globalization through ownership and free exchange of claims on the new company. Within a century, this financial innovation spread through Europe and led to further FinTech innovations including, most famously the world’s first global stock market crash. When technology changes, the consequences can be dramatic, surprising and swift – and not always welcome. The first global stock market crash occurred in 1720 immediately after a bout of speculative exuberance about trans-Atlantic trade. This episode is still a prime example of how financial dreams can activate widespread human folly.

Despite such growing pains, FinTech has added much to society. Above all else, it has democratized capital. Absent finance, a person with a good idea and no money could not start a business. A financial infrastructure that can channel investment from those with wealth to those with ideas solves this problem. In so doing it creates the conditions for dramatic economic growth. By the same token, the invention of investments like bonds, stocks and mutual funds allowed passive investors to earn and save. These new instruments yielded dividends that children or those who cannot work could rely on. They separated the capacity for work from the ability to support oneself. These same tools have become the foundation for the world’s greatest – if unfinished – social project; the creation of pension systems to insure a humane economic future for all.

Sometimes FinTech takes one step forward and two steps back. The recent transformation of the savings systems to self-directed plans that demand that each of us calculate what we need to save and implement in our personal accounts is one such backward step. This great risk shift has put the burden of financial management on families, and necessitated a profound re-alignment of financial technology. The mutual fund sector – itself a wonderful financial innovation – grew astronomically in the 1990’s with the demand for direct investment in money management and the awareness of diversification as an essential tool for risk reduction. With this shift came a need to understand fees, oversight to prevent fraud, and access to financial information. It is not clear all of us mastered this challenge equally well.

The Internet was always going to change the way finance worked. It disintermediated traditional news services, it created information networks and new communities that share ideas. It created a new sense of fairness in terms of access to information. It changed the way services are marketed. As we speak, today’s FinTech lets me manage my retirement, pay my bills, mind risks, find fleeting investments and labor opportunities, shop for property and get a mortgage all through my smartphone. The important thing to realize is that FinTech is not really as new as we think. Civilization constantly invents new financial infrastructure to keep up with society’s increasing complexity.