The World War I battle that continues to haunt Europe (Somme) By George Will
The walk began at 7:30 a.m., July 1, 1916 , when British infantry advanced toward German trenches. In the first hours, eight British soldiers fell per second. By nightfall, 19,240 were dead, 38,230 more were wounded. World War I, the worst man-made disaster in human experience, was the hinge of modern history. The war was the incubator of Communist Russia, Nazi Germany, World War II and innumerable cultural consequences. The hinge of this war was the battle named for “that little stream,” the river Somme.
The scything fire of machine guns could not be nullified even by falling curtains of metal from creeping artillery barrages that moved in advance of infantry. Geoff Dyer, in “The Missing of the Somme,” notes: “By the time of the great battles of attrition of 1916-17 mass graves were dug in advance of major offenses. Singing columns of soldiers fell grimly silent as they marched by these gaping pits en route to the front-line trenches.”
William Philpott’s judicious assessment in “Three Armies on the Somme: The First Battle of the Twentieth Century” is that the Somme was “the cradle of modern combat,” proving that industrial war could be won only by protracted attrition. And hence by the new science of logistics. The 31 trains a day required to supply the British at the Somme became 70 when the offensive began. The romance of chivalric warfare died at the Somme, which was what the Germans called Materialschlacht, a battle of materials more than men. Geographic objectives — land seized — mattered less than the slow exhaustion of a nation’s material and human resources, civilians as well as soldiers.
In the next world war, the distinction between the front lines and the home front would be erased.
The “gay cure” experiments that were written out of scientific history
For the first hour, they just talked. He was nervous; he’d never done this before. She was understanding, reassuring: Let’s just lie down on the bed together, she said, and see what happens. Soon, events took their course: they were enjoying themselves so much they could almost forget about the wires leading out of his skull.
The year was 1970, and the man was a 24-year-old psychiatric patient. The woman, 21, was a prostitute from the French Quarter of New Orleans, hired by special permission of the attorney general of Louisiana. And they had just become part of one of the strangest experiments in scientific history: an attempt to use pleasure conditioning to turn a gay man straight.
British Jews denounce neo-Nazi 'Miss Hitler' pageant
A Scottish woman who said she turned to neo-Nazism after “the Jewish propaganda became too obvious to ignore” was named Miss Hitler 2016.
National Action, a British white supremacist group, announced the winners of its contest on Twitter and on its blog earlier this week because Facebook removed the group’s page in May, shortly after the contest was announced.
Female supporters were invited to “submit a short interview for the site under a pseudonym, accompanied by photos in the T-shirts we sent them.”
According to the group, the contest was designed to raise awareness of its female supporters, who “rarely get much spotlight or recognition.”
The winner, a brunette who was not identified and appears in photos with the lower half of her face covered and performing the Nazi 'Heil Hitler' salute, said in a Q&A on the site that she “didn’t want to believe that the Jews are the enemy, as I was brought up to believe that they are very similar to Christians.”
However, she continued, “Eventually the Jewish propaganda became too obvious to ignore and so I became involved with NA.” 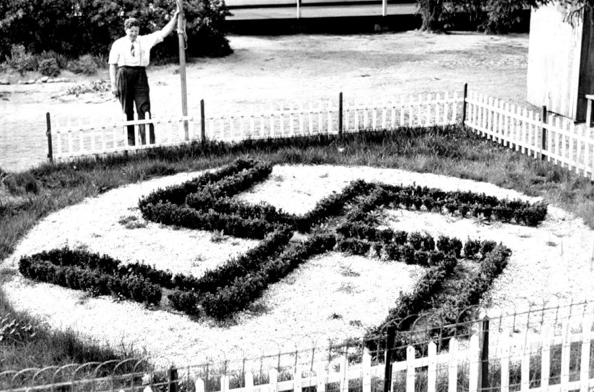 Inside the Nazi Camp on Long Island
Next door to a Germans-only colony featuring streets named Hitler and Goebbels was a youth camp with swastikas on bunks and Hitler Youth short shorts.
Eight decades ago, during the 1930s, young German Americans attended Camp Siegfried. Their summer camp immersion entailed learning Nazi ideology, singing German folk songs, and wearing those creepy paramilitary Hitler Youth short-shorts. There they were, goosestepping and Heil Hitlering away, day and night, sleeping in bunks with swastikas emblazoned above the doorways. All this occurred a short walk from the intersection of Hitler Street and Goering Street, in Yaphank, New York, on Long Island, 60 miles from the Statue of Liberty.
Camp Siegfried was among the pro-Nazi summer camps affiliated with the German-American Bund, the homegrown organization that by 1941 had 25,000 members. Camp Siegfried was located next to a bigger German colony in Yaphank. Restricted to German Americans, “German Gardens,” as the neighborhood was called, named streets after prominent Germans, which then included Hitler, Goering, Goebbels. The Long Island Railroad even ran an 8 a.m. “Camp Siegfried Special” to ferry visitors from Manhattan. Only in January this year did a federal court invalidate the housing restrictions written into the original contracts which survived the repudiation of many German-Americans’ pro-Hitler orientation.
The Green-Eyed Secret Agent Who Seduced the French to Steal Nazi Codes
Time and again, Betty Pack used the bedroom to get secrets out of Axis officials. To steal codes from the Vichy, an expert in seduction would be the Allies’ greatest weapon.
Trust was a rare and elusive quality in the shadowy world of espionage that Betty Pack, Allied secret agent, inhabited and yet, paradoxically, it was always in the forefront of every operative’s mind. Deskman, case officer, agent in the field—they all were preoccupied with concerns about whom they could put their faith in, and who might be quietly plotting to betray them. It was not a casual speculation: survival depended on the choices they made.
And the tactic of pretending to love someone in order to win this trust was the “smoke,” as the jargon of her trade put it, that that Betty had used with great success throughout the war. She was a 28-year-old Minnesota native, born of a good family, tall, slim, and patrician, her  sensible amber hair swept off her broad forehead, her emerald green eyes sparkled, her laugh naughty and uninhibited, who as the agent code-named “Cynthia” had time after time had used the bedroom to turn high-ranking Axis diplomats and military officials into traitors.
But now on a blustery afternoon in the second week of March, 1942, as she flew back to Washington from the crash meeting in a New York hotel room with first her British and then her American handlers – Betty was the rare operative who worked for both intelligence services - for the first time in her long operational career she was troubled about what she’d been asked to do. ...
Betty’s assignment  was to steal the Vichy ciphers.
Found: Elie Wiesel’s Review of Disneyland
In 1957, Elie Wiesel, the writer most famous for his book Night, which told of his experiences in Nazi concentration camps, was working as journalist in New York. When his Israel-based editor came to visit the United States, they went on a six-week road trip, which ended in California, where they visited Disneyland. For Tablet, Menacham Butler found the account that Wiesel wrote of that visit to “the Wonderful Disneyland.” He loved it.
Wiesel wrote: “I don’t know if a Garden of Eden awaits adults in the hereafter. I do know, though, that there is a Garden of Eden for children here in this life. I know because I myself visited this paradise.”
comments powered by Disqus