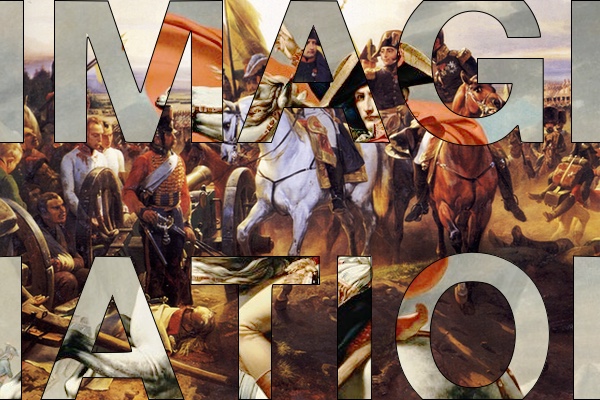 Fantasy-directed imagination attempts to produce a world of make-belief, creating characters and events that have had no concrete existence in reality and are founded on a purely inventive mind. Reality-directed imagination, for its part, endeavours to re-create, in the intellectual realm, actions and events that have existed or have taken place, which we may have plenty or partial information about.

Reality-directed imagination helps us to re-construct history, to describe it and to understand it.

In the study of history we make use of reality-directed imagination as we depict in our minds the characters of individuals or the nature of events. We even try to fill the gaps by resorting to our imagination ever vigilant not to lose sight of reality as it was. In other words, we attempt to imagine the unknown by resorting to the known.

We thus use imagination to recreate what happened and to infer what may have happened. Imagination allows us to link pieces of information into a coherent picture and to understand its significance in a wider context.

By resorting to reality-directed imagination we are able intellectually to disconnect ourselves from the present; to visualize, like a landscape gradually making its appearance as we move backwards in time, the setting in which an event occurred or the personal features of an individual we follow. We are able emotionally to connect ourselves to the prevailing conditions or to a person's thoughts. We are able to be there without being there.

Imagination becomes a tool to transport us backwards in time while remaining glued to reality. We let our minds float well above our present, deep into the realm of the past, eschewing, though, the fantastic. Reality-directed imagination is thus a means to retain a solid sense of reality rather than to submerge into the everlasting landscape of fantasy. We imagine what was and try to afford it life.

We can transport ourselves to the Escorial and see King Philip II of Spain as he writes a side-note on a state paper; and then take a turn backwards and contemplate how Pope Boniface VIII and King Philip IV of France argue over who should have primary authority over temporal affairs, the Pope or the King; and afterwards turn again forward and follow the Ottoman troops as they advance toward Vienna; and then, in a leisurely manner, accompany Diego Velazquez as he paints the Rendition of Breda.

We can stand next to Viscount Castlereagh as he confers with his European colleagues at the Congress of Vienna in an endeavor to design a new international system; and then set our eyes to the future and watch how Otto von Bismarck smokes a cigar as he contemplates his next diplomatic move aimed at securing the unification of Germany; we can move forward and see Gavrilo Princip as he shoots the Archduke Franz Ferdinand of Austria and his wife Sophie; and then join President Woodrow Wilson at the peace conference in Paris as he exchanges views with Prime Ministers Lloyd George and George Clemenceau in an attempt to set up a new international order; finally, we can sit next to Prime Minister Stanley Baldwin as he meets King Edward VIII to discuss his relationship with Wallis Simpson and the emerging constitutional crisis created as a result.

We can do all that and more, but when we put our thoughts on paper or share them with our students we need to connect the dots, to relate the facts, to explain the background, to describe the circumstances, to understand the motives, to analyze the actions and to assess the repercussions, for which reality-directed imagination is vital. Without it, history becomes an incoherent puzzle.

Without imagination as a study-device, the learning of history becomes well-nigh impossible, for the information furnished to us is rendered unintelligible. We are unable to relate to it in any meaningful manner. We assess it in a mechanical way, devoid of image, sound and feel. Our attempt to understand it leads to a dead-end for we cannot leap forward from the stale fact before us and relate it to other facts beyond it. Without imagination we cannot compare, distinguish and separate; we cannot know the difference between the particular and the general. In order to study history we need to avoid the mechanical, on the one hand, and the fantastic, on the other. In other words, we ought to eschew both lack of imagination and fantasy-directed imagination; the first does not allow us to proceed forward while the latter leads us to the realm of the unreal.

History is the province both of art and science, of the contemplative and the concrete. To know it, to understand it, to relate to it, we need imagination; an imagination that does not create a new world, but rather re-creates an old one.