"Free State of Jones" -- What People Are Saying

NYT raves about new movie about "Free State of Jones"

Directed by Gary Ross (“Seabiscuit”) with blunt authority and unusual respect for historical truth, “Free State of Jones” explores a neglected and fascinating chapter in American history. Mr. Ross consulted some of the leading experts in the era — including Eric Foner of Columbia University, whose “Reconstruction” is the definitive study, and Martha Hodes of New York University, author of a prizewinning study of interracial sexuality in the 19th-century South — and has done a good job of balancing the factual record with the demands of dramatic storytelling. The result is a riveting visual history lesson, whose occasional didacticism is integral to its power.

No one quite knows what to make of “The Free State of Jones,” the latest big-budget feature film about the history of the Civil War. Some have praised it as the “final word on racism’s vicious legacy” while others have lambasted it for engaging in “the passive violence of distortion.” All this has left the future of the genre in doubt. In the wake of the film’s disappointing opening weekend, Variety wonders whether there is money to be made in “quality movies for adults with top talent” like this, which hope to contend with the successful formulas superhero and fantasy franchises. “The Free States of Jones” winds up accomplishing considerably more than its critics assert, and yet still much less than the genre of Civil War films needs it to.

More than other recent films on the Civil War era, “The Free States of Jones” melds the racial politics of slavery with the politics of the nation’s greatest conflict. Steve McQueen’s “12 Years a Slave” (2013) was built on one of the slave narratives that helped fuel the antislavery cause, but understandably its plot never made it to the consummation of the abolitionists’ campaign. Steven Spielberg’s “Lincoln” (2012) explored how the Civil War led to emancipation, but managed the feat while marginalizing the very subjects of emancipation, relegating them to roles as onlookers and reminders of the moral gravity of the work undertaken by national leaders, who are white men all.

In contrast, “The Free State of Jones” is centrally concerned with the intersections of race and slavery with the Civil War and its domestic politics — with some interesting gender complications thrown in as well. In a film tradition typified by reconciliationist fantasies, evasive race politics, and unexamined gender norms, this alone situates it on progressive terrain. Its story accomplishes even more, for it is the tale of Newton Knight, the Mississippi native who led a rebellion within a rebellion, establishing the interracial Free State of Jones as a challenge to a Confederacy built on class privilege and white supremacy. 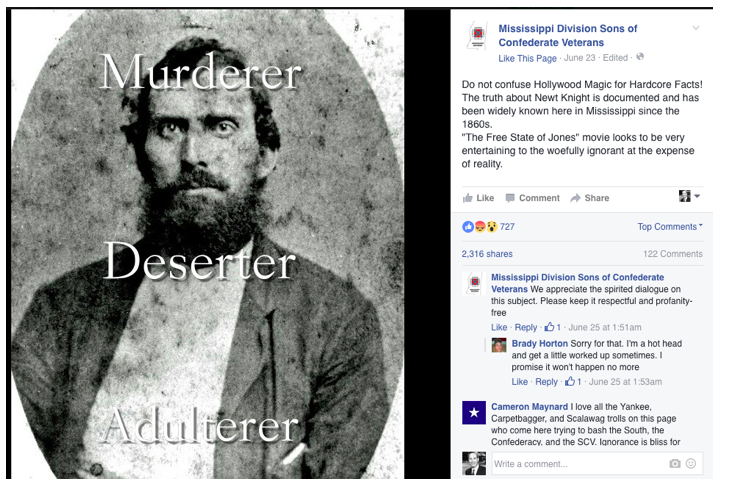 First, there is the obvious “white savior” motif, which others have already noted.
In the book Bynum remarks, “At best, Newton Knight became a primeval Robin Hood, a kind of Anglo-Saxon Noble Savage.” But in the film there are also tired flashes of the Tarzan narrative: a white man who, dropped into a jungle, masters it better than the natives.

For instance when Newt is delivered to a swamp encampment of runaway slaves, the runaways are eating whatever they can, making fires in the hollows of trees and sleeping on the ground and in the open. By the time Newt leaves the swamp, he has grown and armed the encampment, built shelters, ambushed soldiers, organized feasts of roasted pig and corn and, as Rachel put it, he even “grew crops in a swamp.”

Newt conquered the swamp in a way the runaway slaves never had.

Second, there is little space in the film for righteous black rage and vengeance, but plenty for black humor and conciliation. After Moses, one of the runaways from the swamp, is lynched after registering blacks to vote, Newt gives his eulogy, remarking: “The man had so many reasons to be full of hate, and yet he never was. That, Lord, is one of your greatest miracles.” This is too often the way people want to think of black folks in the wake of trauma: as magically, transcendently merciful and spiritually restrained.

But perhaps the most disturbing feature of the film is the near erasure of slavery altogether and the downplaying of slave rape in particular to further a Shakespearean love story.

The story behind the Free State of Jones (CBS)

In the new film "Free State of Jones," Matthew McConaughey plays Confederate soldier Newton Knight, and depending on whom you ask, Knight was either a hero or a traitor.

"The deeds of the story, the context of that time, will be very relevant to today," he said.

Knight was a poor white farmer from Mississippi who in 1863 abandoned the Southern cause, and spent the rest of his life fighting against oppression. "I think his DNA was sort of written in the Bible and the Declaration of Independence," McConaughey said. "I mean, here's a guy who believed there were no kings on Earth above him. There is one king, and that's God. And so his faith trumped the dominant values of society at that time."