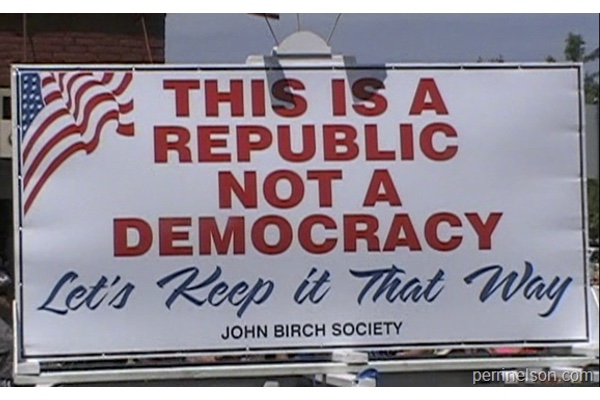 The current U.S. presidential election cycle may seem over the top. But in one important way, it is no different than any other over the past several decades. Since the 1970s, presidential candidates running under the Republican ticket have successively shifted further and further to the political right. How many times have we heard—or said—that George W. Bush made Richard Nixon look like a liberal?

The rightward political shift is no accident. Since the end of World War II, far-right conservatives and libertarians have patiently laid the groundwork for a national climate receptive to their ideals of weak government and a strong corporate presence. 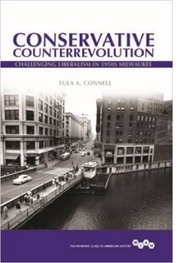 In the 1950s, a time when Congress had recently made affordable housing the law of the land, when expansion of Social Security and creation of federally-funded health care were on the table, and when unionized workers made up a third of the U.S. workforce, the conservative agenda appeared moribund.

Yet just beneath the surface of a seemingly ever-expanding social welfare state, far-right conservatives and libertarians were strategizing what some of them called a “50-year project” to take the country back.

Initially coined by conservative intellectual Frank Chodorov in 1950 to describe the effort to uproot “socialism” from college campuses, the “50-year project” moniker became a far-right conservative mantra describing the effort to undo what Chodorov called “the socialization of the American character”—that is, New Deal-era laws and regulations that prioritized the welfare of consumers and workers.

Mid-century Milwaukee foundry owner William Grede is emblematic. Before the Koch brothers, William Grede was among a core of far-right economic conservatives around the country who sought, in short, to Make America Great Again.

In a 1955 letter, Grede congratulated a fellow Milwaukee businessman on his efforts to promote among his employees the philosophy of far-right radio broadcaster Clarence Manion.

“As someone said to me recently,” Grede wrote, “ ‘The revolution of 1933 was possible only because of the revolution that took place among the so-called intelligentsia at the turn of the century.’ Our job is to start a revolution in the other direction, like that of the early 1900s and hope that in the next 50 years we can swing it back.”

Across the country, an array of wealthy business leaders and industrialists like Grede—who took national stage in numerous roles, including as president of the National Association of Manufacturers, director on the Chicago Federal Reserve and head of the YMCA—financially supported an array of far-right and libertarian endeavors.

Along with his peers, some of whom, like Fred C. Koch, joined him as founding members of the John Birch Society, Grede’s goal in funding far-right organizations was not to create a new political party but to turn the political winds slowly their way.

“There is nothing more autocratic than majority rule,” Grede asserted. “There are people in our country who would like to establish a true democracy—where majority rules. But majority rule would destroy our society of personalities and the dynamic spirit that has made us great.”

Grede and others like him sought to create a nation that reflected their beliefs. The tactics they used to do so were a forerunner of those employed today by those like Fred Koch’s sons.

They raised vast amounts of money for extreme conservative causes. They used public forums to win Americans’ hearts and minds. They utilized the media. And they specifically targeted impressionable young people.

When Manion sought to make the leap from radio to television, Dallas Bedford Lewis, the millionaire president of Lewis Food Company, which manufactured Skippy brand pet foods, was there to support him. From Texas, multi-millionaire oilman Haroldson Lafayette (H.L.) Hunt bankrolled a media operation, Facts Forum, which included a nationally distributed newspaper and television and radio broadcasts.

More than 600 radio stations and 50 television stations carried Facts Forum programs in the mid-1950s, with a regular listening and viewing audience of at least 5 million. Facts Forum encouraged its audience to form neighborhood discussion groups, and gave cash incentives to those writing letters to the editor of their local newspapers on Facts Forum topics, such as repealing the income tax.

The Freedom School’s libertarian curriculum promoted opposition to all government, including publicly funded police, firefighters, schools, and even national defense. The Freedom School flew only its own flag—and not that of the United States.

Contemporary observers did not dismiss these individuals and movements and, in fact, pinpointed a trend toward far-right extremism they found deeply disturbing. Classifying 20 percent of the population as “radical right extremists” or “extreme conservatives,” the Anti-Defamation League in 1964 asserted that between 20 percent and 25 percent of the U.S. public strongly opposed such extremists, with “the remaining 50 percent or 55 percent of American citizens the prize to be won.”

The intervening social upheaval of the 1960s, LBJ’s Great Society and Barry Goldwater’s trouncing in the 1964 presidential elections seemingly confirmed the New Deal revolution and further muffled the voices of William Grede and his fellow travelers. But the far-right had laid the groundwork in the 1950s.

These progenitors of today’s far-right had the patience—and the foresight—to undertake the slow process involved in reorienting an American public away from its support of the programs and goals of the New Deal. They sought to create an environment in which a presidential candidate like Ted Cruz became a 2016 frontrunner with a platform promising to eliminate the IRS, the Department of Education, the Department of Energy, the Department of Commerce, and the Department of Housing and Urban Development.

As journalist Thomas Stokes perceptively stated in 1948: “We went through a peaceful revolution in this country in 1933. We are now in the counterrevolution.”