“The Terrible Power over Human Lives of Ideological Abstractions”

Walter Moss is a Contributing Editor to HNN and the author of A History of Russia, Vol. I and Vol. II and Russia in the Age of Alexander II, Tolstoy and Dostoevsky, which contains several chapters dealing with Herzen. 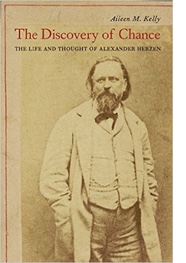 British political philosopher and historian Isaiah Berlin thought that Alexander Herzen (1812-1870) was “the forerunner of much twentieth-century thought … a man with a quality akin to philosophical genius.” But Berlin also lamented that no good biographies of Herzen existed. Now, finally, one does, and it is by Aileen Kelly, who considered Berlin a mentor and friend. She has previously written on both Herzen and Berlin, and in the collection The Legacy of Isaiah Berlin she noted his “remarkable affinity with Herzen whose fundamental thesis . . . was ‘the terrible power over human lives of ideological abstractions.’ ”

Like Berlin, who wrote a biography of Karl Marx, as well as much on Tolstoy and other Russian thinkers (including Herzen), Kelly’s main biographical interest is in her subject’s ideas. And unlike Martin Malia’s earlier worthwhile Alexander Herzen and the Birth of Russian Socialism, which concentrated only on Herzen’s early and middle years, Kelly treats Herzen’s evolving thoughts up until his death after decades of foreign exile. But her focus on his thinking leads her to omit many of the colorful personal details of the last few decades of his life, as found, for instance, in E. H. Carr’s The Romantic Exiles.

Because of the book’s heavy concentration on ideas, it is not a book for the faint of heart. In one chapter, for example, Kelly devotes more than thirty pages to discussing the influence of the ideas of the Frenchman Pierre-Joseph Proudhon on Herzen and the similarities and differences between their thinking. There is even more space devoted to the impact that all the German thinkers, especially Hegel, had on a younger Herzen. And although Kelly’s writing is clear and jargon-free, readers must occasionally plow through paragraphs that extend beyond a single page.

But sticktoitiveness has its rewards—both for the author and the reader. Kelly provides further clarification about some of Berlin’s main points about Herzen, and she goes beyond him in her emphasis on Herzen’s appreciation of science, especially of the evolutionary thinking of Darwin and others.

She mentions Berlin calling “attention to Herzen's remarkable early perception of the dangers to humanity from the pursuit and pursuers of ideologies”(532), but also provides many concrete examples of warnings from Herzen’s writings.

Whereas Berlin had devoted a small number of pages to Herzen’s view of history—“History is all improvisation, all will, all extemporized. There are no frontiers, there are no time-tables, no itineraries”—Kelly delivers a forty-page chapter on Herzen’s thinking regarding “What Is History.” Her conclusion is well captured in the quote she provides from Herzen’s essay on the English socialist Robert Owen (an English translation of that essay is available in an abridged edition of Herzen’s My Past and Thoughts):

Both nature and history are going nowhere, and therefore they are ready to go anywhere they are directed. . . .

Having neither program, nor set theme, nor unavoidable denouement, the disheveled improvisation of history is ready to go along with anyone. . . . A multitude of possibilities, episodes, discoveries in history and nature, lies slumbering at every step. (422)

Berlin wrote that “Herzen's most constant goal is the preservation of individual liberty. . . . What made him unique in the nineteenth century is the complexity of his vision.” In an essay on “Herzen and Bakunin on Liberty,” he added that the liberty “of actual individuals, in specific times and places” was an “absolute value” to Herzen. Berlin, like Kelly in her new book, emphasizes the importance of Herzen’s From the Other Shore and quotes the following from it.

The masses want to stay the hand which impudently snatches from them the bread they have earned . . . . They are indifferent to individual freedom, liberty of speech; the masses love authority. They are still blinded by the arrogant glitter of power, they are offended by those who stand alone. By equality, they understand equality of oppression . . .  they want a social government to rule for their benefit . . . But to govern themselves doesn't enter their heads.

Kelly writes that “Herzen’s attempt to define inner freedom and to express it in both his personal and his political life is at the center” of her book. (8) Much more so than Berlin, she discusses the similarities between the ideas on freedom of Herzen with Proudhon and with John Stuart Mill—see the abridged English edition of My Past and Thoughts for two Herzen essays on them. For example, she compares Herzen’s concern with the masses indifference to “individual freedom” with Mill’s concern with “the collective tyranny of popular sovereignty.” (404)

Like Berlin, Kelly mentions Herzen’s dislike of the bourgeois and what he perceived as a bourgeois mentality, which implied “the degradation of the whole of moral life,” the “narrowing of men's minds and energies . . . to the interests of the countinghouse and bourgeois prosperity.”(429)

Both scholars also note that in his quest for balancing liberty and equality, Herzen believed that a transformed Russian commune, a structure that still contained most of Russia’s population, held out hope for a socialist future.

They also both emphasize the importance of Herzen’s “Letters to an Old Comrade,” written to the revolutionary Mikhail Bakunin in 1869. Kelly quotes Berlin’s words that these letters are “perhaps the most instructive, prophetic, sober and moving essays on the prospects of human freedom written in the nineteenth century.” (513) More than ever, Herzen now realized that the best way to extend freedom was not by the violent, impatient methods of Bakunin, but by gradual, more realistic, evolutionary methods.

Unlike Berlin, Kelly stresses the consistency of Herzen’s empirical, scientific, fact-based approach to the past and present, to reality itself. After acknowledging the early Romantic-Age influences on him, Kelly’s next four chapters (4-7) are titled “A Revolution in Science,” “Science and History,” An Education in Method,” and “Science and Saint-Simonism.” She begins this section by noting that unlike many of his contemporaries at Moscow University from 1829 to 1833 he was enrolled in the Faculty of Physical and Mathematical Studies.

Kelly believes that Herzen’s approach to reality (including history) and distrust of all ideologies were both affected by his scientific training and interests, leading him to prefer a method “he described as speculative empiricism.” (251)

Although Darwin’s Origin of Species did not appear until 1859 and his Descent of Man in 1871, other thinkers had already suggested some of the evolutionary ideas later absorbed and modified by Darwin. And Herzen was familiar with some of these scientific thinkers. Kelly insists that “his place in the history of ideas is not with the last of the socialist romantics but in the avant-garde of the very few thinkers who anticipated the significance of the Darwinian revolution for our understanding of history.” She thinks his “originality [lies] in singling out the role of chance in history thirty years before Darwin's explosive Descent of Man” (525), and that “he stands alone among the thinkers of his century in his grasp of the consequences of evolutionary thought in transforming our understanding of history and freedom.” (531)

Even though Herzen wrote little about Darwin directly, he was living in London when the Origin of Species was published there and sent a copy of to his son Sasha, who would become a scientist, soon after it was published.

Kelly’s title, The Discovery of Chance, indicates the point she emphasizes again and again about both Darwin and Herzen: They believed that evolution occurred because of “chance,” not any Divine plan—she admits that early on Darwin was murky on any role Providence might play but in 1876 summarized his personal view: “There seems to be no more design in the variability of organic beings, and in the action of natural selection, than in the course which the wind blows.” (423)

Although Kelly argues that several other scholars have overemphasized the influence of Romanticism on Herzen and all but ignored his more scientific approach, she does not deny the movement’s lasting impact on him. His “lifelong project,” she maintains was “seeking to combine rational self-determination with the pursuit of expressive unity, the insights of the Enlightenment with those of the Romantic reaction against it, philosophical speculation with the empirical methods of the natural sciences.” (23) Like John Stuart Mill, for example, he realized that in approaching reality, we need imagination and empathy as well as reason.

Kelly clearly believes that Herzen’s ideas are important for us today. She starts off her first chapter with a 1905 quote from Leo Tolstoy, “Herzen awaits his readers in the future. Far above the heads of the present crowd, he transmits his thoughts to those who will be able to comprehend them.” (1)

She is close to accepting Peter Watson’s view expressed in The Modern Mind: An Intellectual History of the 20th Century (2001) that evolution was “the best idea, ever” and that “we are now in the era of ‘universal Darwinism.’ ” Like Watson, she appreciates science’s attempt to be open, tolerant, and objective.

In our own time, when so many people are not open-minded and reject scientific findings, Herzen’s preference for a scientific approach to reality as opposed to an ideological one seems as important as ever. (According to a 2009 Pew poll, only “32 percent of the U. S. public accepts” that “humans and other living things have evolved over time and that evolution is the result of natural processes such as natural selection.” Only 49 percent agree that the “earth is getting warmer because of human activity such as burning fossil fuels.”) There are also ample reasons for arguing that we can best understand reality, whether present or past, by rejecting rigid ideologies and approaching it with an open mind—but, also as Herzen realized, with imagination and empathy. Martha Nussbaum’s recent Political Emotions: Why Love Matters for Justice makes this same point when discussing Mill and other thinkers.

Herzen’s criticism of bourgeois materialism and the masses distrust of independent thinkers became more relevant than ever after his death in 1870. In The American Mind: An Interpretation of American Thought and Character since the 1880s(1950), Henry Steele Commager wrote: “Who, in the half century from Cleveland to Franklin Roosevelt, celebrated business enterprise or the acquisitive society . . . ? Almost all the major writers were critical of those standards, or contemptuous of them. . . . Most authors portrayed an economic system disorderly and ruthless, wasteful and inhuman, unjust alike to workingmen, investors, and consumers.” In the 21st century Pope Francis and Bernie Sanders (like Herzen, one who prefers some type of democratic socialism) have been equally critical of our capitalist system. And the prominence of Donald Trump suggests that the U.S. anti-intellectualism strain that historian Richard Hofstadter wrote about more than a half-century ago is far from dead.

The last fifty years or so have also helped us to appreciate more Herzen’s point that not all progressive developments have to follow Western models, that in advancing toward socialism, for example, Russia might have built upon its own peasant communal structure. In chapter such as “Buddhist Economics” in his Small Is Beautiful (1973), E. F. Schumacher made a similar argument about third-world developments.

Herzen’s distrust of ideologies and advice to be humble and open-minded about truth has recently been echoed by Pope Francis in a 2013 sermon: “Ideologies are rigid, always. . . . And when a Christian becomes a disciple of the ideology, he has lost the faith.” He urged Christians “to remain humble, and so not to become closed.”

By documenting and emphasizing Herzen’s distrust of ideologies and his realistic approach to struggling toward truth, Kelly’s book provides us with a much-needed reminder that such struggles are a never-ending battle.