Yes, Yes to "No-No Boy," the New Play About a World War II Japanese-American Who Faces a Wrenching Decision in an Internment Camp 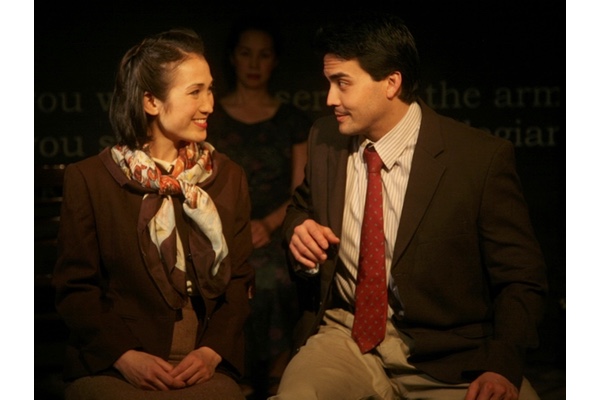 There have been several plays, movies and television documentaries about the 100,000 or so Japanese-Americans confined at internment camps on the West Coast and in some other towns during World War II. No-No Boy, a play by Ken Narasaki presented by the Pan Asian Repertory Company and based on the novel by John Okada, is the latest and it tells a troubling, scorching story of one Japanese-American’s decision to refuse to join the U.S. Army while he lived in one of the camps.

Now, just after the war has ended, the man, Ichiro, is back in his home town, Seattle, after a two year stretch in prison for his refusal to serve and runs into a blitz of criticism from his old friends and loving support from his parents. No one really understands why he did not go into the military, as did so many other Japanese-Americans. His former friend, Elo, even spits at him. Taro, his younger brother, outlines the stand of most Japanese-Americans when tells Ichiro that “we were born here, we play ball here, we listen to music here, we’re gonna get marred here, we’re gonna have kids here. We owe this country something for that! I’m an American and I’m going to fight like an American,” he said.

There are several monologues and conversations in the play that underline the idea that many people from other ethnic groups saw themselves as Americans and joined the army. No group of people was interred in camps except the Japanese, though. The playwright argues, as all Japanese-Americans argue, that was not right.

When he comes back, a friend hooks Ichiro up with a wife whose husband has seemingly abandoned her and a romance starts. He also visits the parents of a boy who was killed in front of him. He drives around town with another friend explaining his current plight. His associations with friends in a desperate desire to connect with them once again leads to an explosive ending of the drama.

Narasaki’s play is yet another indictment of American policy and we feel sorry that the government prosecuted and jailed Ichiro and others because it believed, at the time, that was proper policy and that Japanese-Americans were spies and saboteurs. The playwright does not make Ichiro any kind of a hero, though. He sees him as someone who followed his conscience and rebelled against American policy and the cultural oppression many Japanese Americans felt in the U.S., but at the same time sees him as a man who, once he gave his big speech, probably should have joined the army. Narasaki’s jury is still out on Ichiro.

One really successful part of the play is Ichiro’s relationship to his father. The father is a lovable guy and very much like all dads when it comes to his son. He is constantly trying to give his son money to go out on the town, or to spend on women. He forgives him just about everything and suffers emotionally as his son goes to prison and encounters difficulty upon his return to Seattle. The relationships between Ichiro and his former friends are good, too, although some cannot forgive him for what he did.

I have seen a number of plays about the internment camps. My Dad served in World War II (radar in England). I met a lot of his war buddies over the subsequent years. That American story of the war, both in combat and at home for “Americans” was quite different than the story of the Japanese-“Americans.” It should have been the same and the great tragedy is that it was not.

No-No Boy is a very good play with a harsh, scalding beginning, but it has some weaknesses. One big problem the play should have addressed was the legal standing of Japanese-American men. If they were interred in camps, they could leave them by joining the army and many did so. Some of the others were prosecuted but others were not. Narasaki should have done more with this and more with the overall backdrop of the internment camps. We find out little about them. Many Asian-American writers make that mistake. Asian-Americans know a lot about the internment camps, but many other people know nothing about them. Playwrights need to fill in the historical blanks.

The Pan Asian Repertory Company, a superb theater troop, did not build a decent set for this play (I suppose because of budget). The actors sit around in a large semi-circle and get up for dialogues and small scenes from the play. The power of the play gets across, but it would work better with a full set of some kind. Much of the success of the play is due to spirited work by skilled director Ron Nakahara.

You have to give a yes-yes to this No-No Boy production because it is stinging and because the audience learns a great deal of history, and history about a sad chapter in U.S. life, from it.