Luke Reader received a Ph.D. in History from University of California, Irvine.  He is currently researching internationalism and the Labour Party.  He teaches for the SAGES program at Case Western Reserve University. 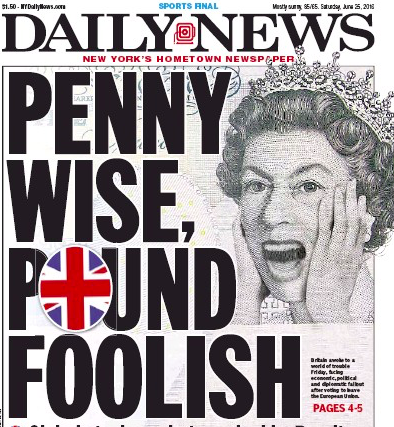 Lord North can rest easy in his grave.  Granted, he lost the Thirteen Colonies, but posterity will likely remember David Cameron as the prime minster who broke up Britain.  Brexit doesn’t just bring economic uncertainty in its wake.  Scotland, which voted decisively to remain in the European Union (EU), is preparing for a second independence referendum.  This time, nationalists will probably – and rightly – win.

So why did Britain vote to leave?  Commentary in the United States has focused on immigration.  Brexit campaigners certainly exploited popular resentment over the issue, making hay with the revelation that 330,000 people, including 184,000 EU members arrived in Britain in 2015, and stoking racial resentments with scaremongering over refugees.

Brexit was a bad decision, but historians should look beyond immigration when explaining why Britain left the EU.

EU withdrawal is an expression of anger toward long-term economic deprivation and the failure of governments to direct funding, public services, and infrastructure towards those most in need.  Immigration feeds into this narrative.

This analysis bears fruit when looking at the post-Brexit electoral map.  The regions of the UK that voted to leave the EU were those that have suffered economic hardship over the past four decades: the former mining regions of Wales, the poorer outer boroughs of London, formerly industrial North East England, and the manufacturing regions of the Midlands struggling to compete in the global economy.  Correspondingly, those regions that voted to remain in the EU either had clearly defined positive ties to the global economy, such as London, the world’s largest centre of finance and services, were affluent suburbs, multicultural cities, the locations of major universities or, like Scotland, combined these factors with local control of social policy.

For the roots of Brexit, historians should look to the economic changes of the late 1970s and 1980s.  This was the period in which Conservative governments under Margaret Thatcher privatized state-owned utilities, closed inefficient or loss-making factories, and began to organize the economy around services rather than manufacturing.  These transformations disproportionately affected those regions of the country that opted for Brexit.

But while blaming Margaret Thatcher is a fine British tradition, does it tell the full story?  Thatcher fell from power a quarter of a century ago.  The real Brexit culprits are those subsequent governments that failed to redress the changes she introduced.  Tory administrations in the 1990s merely continued the economic policies of the Thatcher era.  While the Labour governments of Tony Blair and Gordon Brown brought additional funding and public services to the poorer regions of the UK, they failed to bring what was most needed: jobs and houses.  With the austerity policies of the post 2010 Conservative governments, even these modest gains unraveled.

Since the 1980s, Britain has been cleaved into two nations, one that prospered and one that grew poorer even as the overall country enjoys unparalleled wealth.  While immigration impelled some voters to choose Brexit, the chasm created by failed government policies and a lack of opportunity was a more important motivating factor for many.  Many parts of the UK opting for Brexit have suffered for decades from sub-standard housing, poor public services, endemic unemployment or poorly paid jobs, decaying town centers, and growing inequality.  Others, such as the West Midlands, are major manufacturing centers vulnerable to global competition.  All of this combined to create a feeling amongst many that they have been left behind.

Immigration needs studied within this landscape of decay.  Since 2004, Britain has allowed free movement of labor to all members of the EU in an effort to meet labor shortfalls.  By 2006 almost 600,000 EU citizens, mainly Eastern Europeans, had arrived in the UK.  Alongside this grew a perception that EU migrants were driving down wages, taking away opportunities, or unfairly benefiting from government spending.

These fears about EU immigrants are and were wrong.  Britain has benefitted from open borders.  As a London School of Economics report shows, EU immigrants are less likely to claim benefits than British-born citizens, pay more in taxes than they receive from the UK government, staff vital public services, and stimulate demand and jobs through the consumption of goods and services.  The problem is that successive Conservative and Labour governments failed to make a positive case for immigration that addressed economic anxieties or lingering concerns that migration would dilute a sense of Britishness.  Nor did Remain offer a compelling argument.  This allowed Vote Leave to campaign for Brexit by claiming that economic catastrophe could be averted only if Britain took control of its borders.

Let’s be clear, immigration was undoubtedly an issue for some Brexit voters, but it was not an isolated factor.  Anger over migration should be considered a displacement therapy for economic and cultural despair that those advocating for Brexit “hijacked” for their own ends: spending decreases, further free-market deregulation, and wage reductions.

BBC and The Guardian demographic analyses show the extent to which Brexit exposed national divides.  Under 45s voted to remain in the EU, and those older to leave.  If turnout had not been lowest amongst under 24s, this factor may have kept Britain in the EU.  University graduates preferred to stay in the EU.  Major British cities rejected Brexit, but smaller population centers approved.  Individuals with higher incomes were more likely to oppose Brexit.  Areas with large populations born outside of the UK voted overwhelmingly to remain part of the EU.   Of the regions of the U.K., only London, Scotland, and Northern Ireland voted to remain.

What comes next is unclear.  To hear some anti-EU campaigners, Brexit is a moment in history to rival the Battle of Britain.  But given disunity in the kingdom and the looming break-up of Britain, the Charge of the Light Brigade is surely a more apt comparison.