What Should We Make of the Democrats' Sit-In in Congress?

Ray Smock is director of the Robert C. Byrd Center for Congressional History and Education at Shepherd University in Shepherdstown, West Virginia. He served as Historian of the U. S. House of Representatives from 1983 to 1995 and was a planner of the bicentennial commemoration of Congress in 1989. 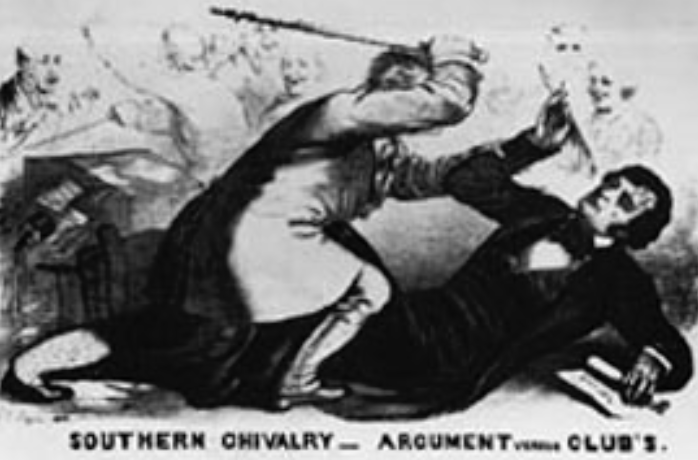 The beating of Senator Charles Sumner, 1856

The House of Representatives sit-in, a protest against the lack of will to address even modest changes to the regulation of military-grade guns, was not as dramatic as the pre-Civil War violence in the House and Senate that saw Senator Charles Sumner beaten with a cane on the floor of the Senate in 1856 or the fist fight and brawling that disrupted the House in 1858, when more than 30 members pushed, shoved, and punched one another over the issue of Kansas statehood. Those episodes vividly documented the pre-Civil War tensions in Congress on the issue of slavery.  The sit-In of 2016 is just as interesting though in a completely different context.

As someone who appreciates and respects the traditions, rules and procedures of the House, part of me was opposed to such a blatant display on the floor of the House because such an event is a violation of the decorum of the chamber, something I believe is essential to the deliberative process. Just because the Republican majority chooses to Do Nothing does not give license to the Democratic minority to stage demonstrations on the floor. The Capitol grounds are the place for demonstrations.

But the partisan part of me thinks Congress has not done its duty to the American people on a host of issues including regulation of weapons of war in the hands of civilians, and I was delighted to see this "reasonable" and limited action that called attention to the failure of the legislative branch to address even the most minimal gun regulation. It is, after all, an election year that is shaping up in a bizarre manner, given the rise of Trumpism. So a protest that is in violation of the rules of the House does not seem so far out of line with the general dysfunction of the chamber.

The part of me that is a congressional historian sees this as a useful signpost and a colorful narrative of the ongoing stress that comes from an obstructionist Congress that does as little as possible to help govern the nation. It is also a sign of the times from the standpoint of social media and its collective effect on campaigning and governing. This demonstration could not occur without social media once the House adjourned and the TV cameras were turned off. Lincoln said nothing can occur without public sentiment. Social media creates public sentiment, both positively and negatively. The Speaker can control the House television cameras, but he cannot control photos and videos from cell phones.

Congressman John Lewis, the distinguished champion of the Civil Rights movement, and other leaders of the sit-in were relying on a time-tested and largely respected device of peaceful disobedience reminiscent of the sit-ins of the 1960s. This gives the House sit-in an aura of moral urgency. Some of the participants in the sit-in were members who represent places that had experienced mass gun violence. To them this was not a stunt but a call to action.  It suggests that some things are higher in order and magnitude than mere House rules of decorum. The sit-in suggests that this moment in our history is one where we have to disenthrall ourselves of some conventions that hamstring progress and raise the stakes of the debate. Compared with Senator Ted Cruz’s recent Senate filibuster, where he read from Dr. Zeus, the House sit-in was a grace note. It has historical significance in this context.

In this election cycle both parties are fully aware of an unpredictable anti-establishment mood in the nation. A sizable chunk of the electorate are fed up with politics as usual and the rise of Trump is a sign that the nation may be overripe for a demagogue who wants to overturn the establishment. By holding a dramatic and unusual demonstration literally on the floor of the House, the Democrats take on the appearance of anti-establishment politicians. It is the Republican majority that looks like the establishment in this scenario.

Speaker Paul Ryan described the sit-in as a descent into chaos. In terms of House rules, it was chaotic, but hardly at the level of chaos that has been caused by years of dysfunctional governance from Congress. Majority Leader Kevin McCarthy put a cynical cast on the sit-in by pointing out that the Democrats were using this tactic to raise money, which they were. The sit-in was hardly over before Democrats on donor lists received messages from John Lewis and others to chip in. Both parties have taken to using every major and minor outrage to keep the social media hopping with requests for more money. This too is a signpost of our times.