The writer is emeritus from the History faculty of Southern Oregon University, the author of many books, a retired Commander, USNR, and a resident of Ashland, Oregon since 1963. A chapter in his book An Independent Scholar in Twentieth Century America relates his wartime experiences as Fleet Air Barracks Officer at the Naval Air Station, Alameda, and his new book Lovers in Wartime, 1944 To 1945 refreshed his memory during its creation and publication. Speaking Up For America is a recent book of his speeches. Vaughn lives in quasi-retirement, at nearly 99, alone, but with ample memories. 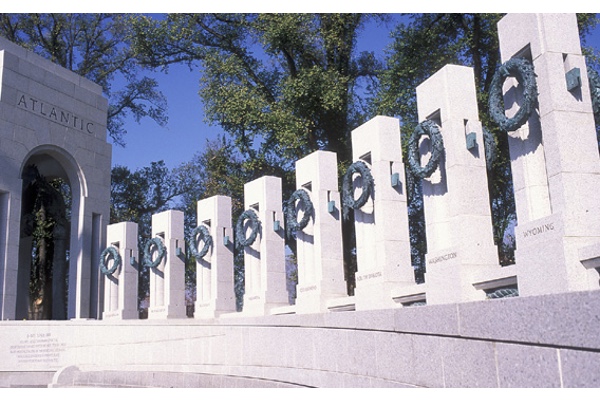 It has been 63 years since, in my 24th year, I raised my right arm in Macon, Georgia and joined the Navy. I had no idea I would serve four years and four months on active duty. What I would do and where I would go were nearly a complete mystery. Contemplating those years, I feel like saying something about the meaning the Memorial in Washington has had for me. 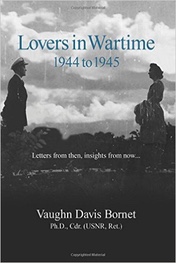 On that “The Greatest Generation” nomenclature: it is flattering, of course. As a professional historian, however, I am always nervous about using the word “great” in any historical connection. I used to explain to college students that alternative words such as “noted,” “memorable,” “powerful,” “famous,” “towering,” and “influential,” might often be more suitable than “great.” At this moment I think that “sacrificing,” “suffering,” “dedicated,” “spirited,” and so on have merit when describing those who really fought, those who didn’t survive, those wounded, and the civilians who shored them up and those who still do. “Great” just bothers me.

Vast numbers of war veterans do seem entitled to special mention. They served long tours of duty overseas; they volunteered for particularly dangerous assignments; they took risks that were not always required; they succeeded in important assignments when others failed. A special category is those who were aware that unique family situations could be involved in their risk-taking but volunteered anyway. The degree of sacrifice by the absent one does seem variable, depending on the home front situation.

There is a vast body of Americans who never wore a uniform but sacrificed in special ways. I think of my parents who spent years worrying about their son’s well being. Preparatory to sending their nearly daily letters of those years to the Hoover Presidential Library, I reread them all. Their income dried up due to “priorities” in materials. I think of those who lost their only child in training early in that war and never recovered from the shock. Worth mentioning are unpaid ration and selective service board members who endured war years of pressure, unpopularity, even hate.

It ought to be said that the entire population of wartime America lived with rationing and endured restrictive government priorities (on steel, for example). They lived in a contracting civilian economy—hard on the heels of a decade of Depression living. Consumer staples vanished. Years ago when writing Encyclopedia Britannica’s article “Rationing: United States” (for sets after 1960) I was struck by the general home front acceptance of onerous meat, sugar, tire, gasoline, and other rationing. Still, government enforcement action against violators was often necessary, for patriotism stretched just so far when that auto just sat there, tank same as empty.

Mention should be made of those whose jobs disappeared abruptly as the government shifted many aspects of manufacturing and commerce into war-related objects. Displaced by the war economy, many individuals had to start all over in locales remote from their friendly birthplace. It is my opinion, moreover, that those who were then classified “4-F” (not meeting induction standards) often (sometimes?) tried especially hard to be good citizens during the war years. They just endured taunts and comparisons with those who were said repeatedly to “be serving.”

World War II was a conflict that required sacrifice, patience, and adaptability from the American populace. That, it seems to me, is what needs to be especially remembered. We were in a war together. That Memorial in Washington is not just to men once in uniform or to the dead and wounded. It is for the wartime generation as a whole--even if we know beyond doubt that some were exempt from most of war’s effects, and a coterie actually profited handsomely. And, we focus repeatedly on those in uniform who returned home wounded in body or spirit. Yet beyond any doubt, vast numbers learned lifelong skills in service; more than that, there were those who used the G. I. Bill to achieve lifetime solvency. There is no real harm in saying that more than a few who served a year to maybe five in, before, and after That War—and stayed in the Reserves--have now and then rejoiced as Uncle Sam used Champus and then Tricare to treat them, even house and care for them (and for family members, too). Life is like that: giving and taking, suffering and reward.

The Depression, and that unthinkable worldwide war, forced my generation to accept the idea that Life is not fair. Sacrifice is not equally shared; rewards are almost randomly distributed; there is no substitute for dumb luck. You “do the best you can with what you’ve got,” we said over and over in the Navy barracks and B.O.Q.s. Still, one somehow rose above adversity. For oh so many, however, that catastrophic war, 1941 to 1945 will always remain a time of personal disaster far beyond any reckoning.

The Memorial on the Washington Mall actually communicates with my memory of so many of my actions and thoughts from early 194l to very early 1946—when a single life that had changed, just changed back again. But it was never to be the same! I do hope that wall is calming the emotions of many who really need its comfort. For the vast American audience out there who have no first hand connection with World War II whatsoever, well, maybe that memorial to veterans of our wars will provide useful insights into how various generations responded, so long ago, to major challenges to Western Civilization in Europe, Asia, and the vast oceans that separated the Axis powers from the Democracies.

Memorials, after all, can only do so much. Little Johnny, who grew happily to 18, was drafted or enlisted, served in Guadalcanal in those jungles or sank with some submarine to a watery grave, or died at Normandy. Only so much is achieved with any kind of memorial. It can’t be helped. But in the last analysis, effort exerted by strangers can count for an awful lot. Going to Services, just being there; those of us still around do appreciate what is done on certain days for the general memory of those no longer here.

While true enough, it also seems true that memorialization with structures can be overdone. The county where I live is seriously planning a “replica” of the Vietnam Veterans structure now in the nation’s capital. One has to wonder why. Is something like that what those who served in Vietnam want or need at this late date? It is hard to believe. It is true that there was widespread (what shall we call it?) misbehavior during the sixties and early seventies, with blame placed on some who were at the time associated with that questionable conflict. Is another memorial supposed to more or less erase those years of neglect?

Not to be reminded of some—maybe any—wars seems after a quick look to have merit. There was a time, more than a century ago, when statues went up in town squares all over America, North and South alike. Most of those memorialized led troops into bloody battle, no doubt, but some may have watched from a distance. Maybe there was too much of that rendering of heroic poses in marble for many a decade. Or not. Rendering judgment is a tricky business, for sure.

I did more than my share of speaking to outdoor audiences on those memorializing holidays. I was glad to do it. The band played; the scouts did their assigned tasks, a variety of speakers from “veterans groups” took their assigned turn: V. F. W., American Legion, and the rest. Then it was the Historian’s turn. Which war would we dwell on this time? A few veterans from the war with Spain lay nearby. The slain of World War were noticeable. Likewise our next giant conflict, the one following Pearl Harbor. Korea? Vietnam? More recent engagements in the Middle East?

It matters so very much to those who survive, as they once again question the value, the importance, the true merit in yesterday’s battles that were waged so far away. Causes, and the words used to describe them, must be handled, as they say, with kid gloves. That war from 1861 to 1865 presents its own itinerary of enduring sectional problems. To detour to the War for Independence is for the speaker a real relief, even a refuge.

Those annual ceremonies are clearly worth organizing, year after year. Yet so many of our countrymen and women never attend and maybe give them no thought at all. Nevertheless, attending a “memorial” service for veterans is not just a Tribute. It can be therapeutic for those who go, stand in respectful mode for just awhile, and go home with a feeling like no other. There has been Remembrance! The mislaid and forgotten have been brought back to the minds of at least a few. A great service has been performed for those with Real Sorrow. All in all, more concrete outdoor memorials may not be essential. But, do take it from one who in the past half century was often there, those live services serve a real purpose. Remembering those, living and dead, who served in our Wars for Causes, is for all of us an Obligation—an act of indebtedness, a Tribute we owe to those who are no longer with us.