Could Trump Be Nurturing the Next Hitler?

Ibram X. Kendi teaches African American history at the University of Florida. His second book, Stamped from the Beginning: The Definitive History of Racist Ideas in America, was recently published by Nation Books. Follow him on Twitter.

Donald Trump more closely resembles in history that leading American eugenicist whose ideas nurtured Hitler: Madison Grant. This year marks the uncelebrated centennial of Grant’s most infamous polemic—The Passing of the Great Race—a book that passed across the Atlantic and into the arms of Germany’s future Fuhrer. 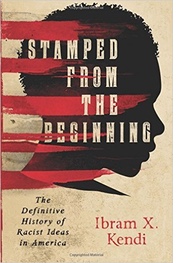 A century ago, Grant ran a wildly popular social campaign that resembles Trump’s wildly popular political campaign today. These two sons of wealthy New Yorkers had their supporters from Wall Street to Main Street believing wholeheartedly that they represented the “great America.”

Madison Grant is most remembered as one of America’s greatest conservationists, responsible for founding the Bronx Zoo and saving several endangered species, including California redwood trees and American bison. But Grant spent his most zealous hours trying to save what he considered the world’s grandest endangered species—the “great race.” He spent his most important hours writing The Passing of the Great Race, a mind-buster that first hit bookshelves in 1916.

It is more than ironic that Trump’s campaign to “Make American Great Again” crystalized on the centennial of Grant’s book. Madison Grant said directly a century ago what Donald Trump says indirectly today: to make America great again, the “great race” must take America back. Just as Trump’s voters fear the shrinking “great race” no longer ruling, 100 years ago Grant’s readers too feared the shrinking great race no longer ruling. Just as Trump has urged drastic exclusionary action—building border walls, deporting millions of people, violently attacking protesters—Grant urged drastic action in The Passing of the Great Race. “The laws of nature require the obliteration of the unfit,” Grant argued.

Thanks to translations into several languages—including German—the Armageddon warnings loaded in The Passing of the Great Race shot round the European world. In 1924, German authorities jailed a Nazi Party leader after his failed coup in Munich. Adolf Hitler used the time in prison—and his cherished copy of Grant’s The Passing of the Great Race—to write Mein Kampf and later justify the Holocaust of millions. And the Nazi czar thanked Grant in a letter. “The book is my Bible,” Hitler wrote to Grant.

Grant fixed into nature a racial-ethnic hierarchy with permanently superior Nordics of northwestern European heritage at the top, above inferior non-Nordic eastern and southern Europeans, above all those non-Europeans on the lowest rungs. Grant concocted a world history of rising and falling civilizations from ancient Egypt up to the United States based on the “amount of Nordic blood in each nation.” The historical lesson for the age was clear: the passing away of Nordic White blood will lead to the passing away of the great America.

Madison Grant’s book received a much better reception among moderate and powerful liberals and conservatives than Trump’s campaign. Prominent reviewers and readers in the United States lavished over The Passing of the Great Race as lovingly as Hitler did in Germany. Quite literally, the book turned a calming light onto the great race’s darkest fears. “A capital book,” former president Theodore Roosevelt toasted, “in grasp of the facts our people most need to realize.”

The mass interest compelled Grant to revise and reissue The Passing of the Great Race three times in five years, and to support copycats like the 1920 bestseller, The Rising Tide of Color Against White-World Supremacy by Theodore Lothrop Stoddard. Grant successfully lobbied Congress to pass immigration restrictions or bans on non-Northwestern Europeans in 1924—a law that would serve as the model for any major anti-immigration restrictions put forth by a Trump administration. Grant applauded as states banned interracial marriages, and when eugenicists started sterilizing and killing an unknown number of “unfit” peoples in the United States and Europe.

If Madison Grant is any indication, Donald Trump does not need to become president of the United States to sow human destruction. Trump may already be nurturing the next Adolf Hitler.