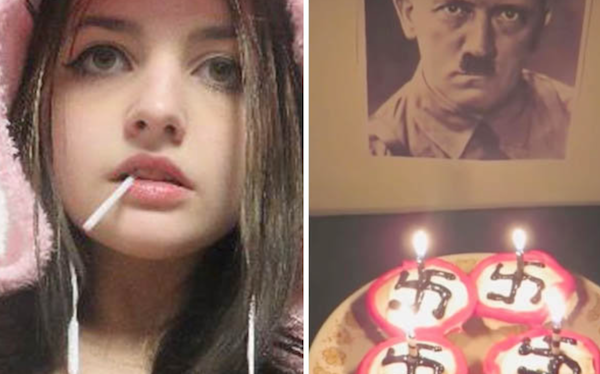 YouTuber sings happy birthday to Adolf Hitler – gets banned from site
A RACIST angel-faced video blogger has been banned from YouTube after a series of shocking videos uploaded to her channel.
Meet the worst Pope in history
Forget about the Borgias, this pope used the papal armies to massacre his family’s enemies, engage in incestuous threesomes, and question Mary’s virginity.
Remember when Pope Benedict XVI abdicated and the media went into a meltdown? You probably heard around then that this wasn’t the first abdication, and that Celestine V had abdicated about 800 years earlier. And then we promptly forgot about all of that when Pope Francis was elected. Because, Francis.
Things could have gone very differently. When Celestine V abdicated in 1294 he was succeeded by Pope Boniface VIII. Celestine was an 85-year old hermit from Naples. He was originally selected because of his great piety but he was, as Eamon Duffy has written, “saintly but hopeless.” Some thought that electing an “angelic Pope” like Celestine would help free the papacy of corruption. But it was not to be: Celestine was badgered into resigning by his successor. A more savvy diplomat, Boniface’s first move as Pope was to secure his position by having Celestine imprisoned in the Castle of Fumone. Celestine endured 10 miserable months of mistreatment there before finally kicking the bucket. Thus began the reign of Boniface VIII, one of history’s least saintly Popes.
The Mystery of the Nazis and The Vanishing ‘Amber Room’
It may be worth $500 million, but the whereabouts of the King of Prussia’s ‘Amber Room,’ bedecked in floor-to-ceiling amber and gold, have remained a mystery since Nazis looted it.
Students graduating from these colleges should be grateful for what Congress did in the 19th century
Strains of Edward Elgar’s “Pomp and Circumstance” March No. 1 are echoing across the land this commencement season.
For hundreds of thousands of undergraduates, higher education was made possible, in part, by the U.S. government’s two Morrill Acts. The legislation helped create our great public universities, with land grants.
During the Civil War, President Lincoln quietly pushed Congress to pass the first Morrill Act — named for its sponsor, Justin Morrill, a Vermont congressman.
It gave federal land to the states to create universities. States received 30,000 acres for each of their congressional seats. About 100 million acres were eventually handed over, and dozens of universities were founded.
A museum of pencil sharpeners?  Yes, and it makes sense.
Collecting pencil sharpeners and assembling them into a museum dedicated to pencil sharpeners is a kind of eccentric thing to do. Step inside the Paul A. Johnson Pencil Sharpener Museum in Logan, Ohio and it somehow seems perfectly admirable.
The Pencil Sharpener Museum is the result of over 20 years of collecting by Ohio local, Rev. Paul A. Johnson. His wife gave him a couple of car-shaped sharpeners in the late 1980s, and his zeal for collecting was born. The sharpeners lived in a pre-fab shed in Johnson’s backyard, growing over time to over 3400 at the time he passed away in 2010. His family was holding onto them when salvation for the whole collection – and the shed – came calling in 2011. It was the Hocking Hills Welcome Center, happy to take on the job of collection custodian, and everything was moved over to their site in South Logan.
Chinese were brewing beer 5,000 years ago!
Beer has been important to people throughout history—in fact, many researchers believe brewing beer is the cornerstone of civilization and stimulated humans to settle down and start farming. Babylonians, Assyrians, Egyptians, the Inca and the Chinese were all brewing thousands of years ago. Now, after researchers analyzed 5,000-year-old brewing equipment unearthed in China, the earliest direct evidence of brewing in that region, archaeologists know what those early brew masters were making, and it doesn’t sound half bad.
comments powered by Disqus