The Hidden Factor in the Outbreak of Violence in Ferguson, Baltimore, St. Louis, and Cincinnati

Christopher Phillips is professor of history at the University of Cincinnati, and author of The Rivers Ran Backward: The Civil War and the Remaking of the American Middle Border (Oxford 2016). 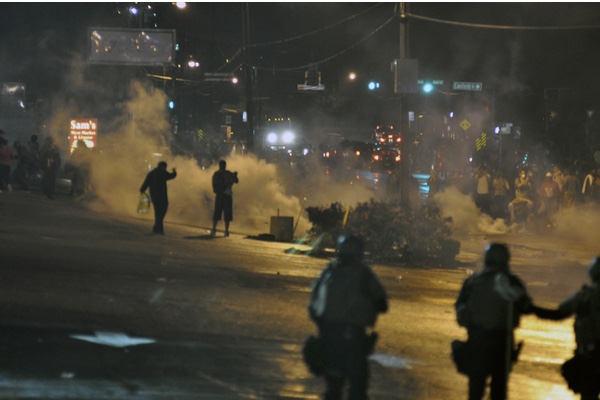 Police officers using tear gas during the first wave of the Ferguson Riots, By Loavesofbread - Own work, CC BY-SA 4.0

Last fall, during the sesquicentennial anniversary of the end of the Civil War, PBS re-aired Ken Burns's epic 1990 film. Digitally restored in high definition with over 11 ½ hours of archival photos, letters and diaries, and narrated by prominent actors and historians, it evocatively records the conflict’s dramatic events, from the opening guns at Fort Sumter to the stillness at Appomattox and, only days later, Abraham Lincoln’s tragic assassination.

The film also re-introduces two interrelated narratives. Slavery was the war’s central cause and its eradication, accomplished by the deaths of over 620,000 Americans, provided its principal meaning. By sacrifice - not the least being the Great Emancipator himself - the nation was sanctified, and its residents, North and South, renewed in their faith in the American experiment of freedom. In the last episode, uniformed veterans reenact the war’s famed high water mark, Pickett’s Charge, at the 1913 national reunion at Gettysburg. Neither cannon nor musket fire nor gleaming bayonets greeted the aged, often limbless Confederates, but rather warm embraces from former Union foes now fellow Americans. 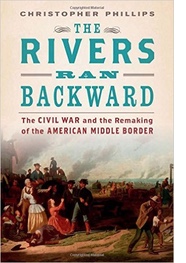 With Obama’s presidency judged by many as Lincoln’s fullest legacy, the re-airing coincides with a national debate over race and the Civil War’s legacy. Enduring Confederate symbols contradict claims of reconstruction and reconciliation, alongside recent racial violence that clouds sunny claims of a post-racial America. Tragic shootings of ten African Americans in Charleston, South Carolina (witness to both the original vote for secession and the outbreak of the Civil War), led the governors of South Carolina and Alabama to order Confederate flags removed from statehouse grounds. Burns went on national television to remind viewers that the war was over “the nation’s original sin” – slavery – and recent events need to be “linked” back to the war after the war over emancipation and black citizenship rights, which the film did not mention.

Such incidents have borne fewer overt linkages to the Civil War than Charleston’s. But a distinct, unreconciled war narrative informs them nonetheless. All of these cities are situated on the latitude astride the Mason-Dixon Line, extended westward by the Ohio and Missouri rivers, that reputedly separating freedom and slavery, North and South. Burns’s film mentions little of the war there, in part because they had collectively complicated Civil War-era experiences that do not easily conform to its conclusions about slavery, race, and reconciliation.

In the antebellum decades, slavery appears not to have been so divisive in the Border States. As late as 1850 slavery existed in Lincoln’s adopted state, and as a seasoned lawyer in 1847 he represented a Kentucky slaveholder seeking his fugitive property. White supremacist “Black Laws” existed in all these states and “Jim Crow” ordinances in many of their cities. Abolitionism, more than slavery, drew white residents’ opposition, and violence was common against practitioners.

The Republican Party was born in Illinois, and Lincoln and most early Republicans there espoused moderate politics over slavery, opposing slavery’s extension into the territories rather than its existence in the states. The ironic history of the “Corwin Amendment” to the U.S. Constitution provides a case in point. Named for Thomas Corwin, a Republican U.S. congressman from southern Ohio and chairman of the House committee that introduced it in the spring of 1861, the amendment would have protected slavery in states where it existed. Passed by exactly the number of votes necessary in the House and the Senate just hours before the inauguration, in no small measure owing to Lincoln’s efforts to wrangle votes, the new president supported it in his inaugural address. Historian Daniel Crofts has found evidence that six states ratified it, mostly border states, especially western. The first was Kentucky, followed by Ohio, Rhode Island, Maryland, and eventually Illinois. (West Virginia did so after it became a state in 1863.) No other state voted to ratify, so it was never enacted. Had it been, ironically, it would have become the 13th amendment protecting slavery. Four years later, Lincoln shepherded through Congress what became the enacted 13th amendment ending slavery.

Although the border slave states remained “loyal” (meaning they didn’t secede) and far more men enlisting from them fought in the federal rather than Confederate ranks, Kentucky, Missouri, and Maryland experienced what must be characterized as a hostile wartime occupation. It changed the allegiances of many white proslavery residents. After the war, their allegiance exempted these states largely from Reconstruction measures. With their legislatures thereby free to defy them, “rehearsals for redemption” occurred years before those in the former Confederate states.  Guerrilla-style violence extended the war there, as former Confederates and disaffected federal soldiers targeted unionists, Republicans, and African Americans, driving thousands in search of safety and freedom to cities like St. Louis, Cincinnati, and Baltimore. Racial solidarity drew many to the “Rebel Democracy,” the pejorative term for “Conservatives,” or anti-emancipationists. By 1866, they controlled Kentucky’s and Delaware’s government, and within a decade, Maryland’s and Missouri’s. Decades of racial subordination resulted in all of these former slave states.

The war and its legacy were equally complicated above the great border. After 1861, military enlistments on both sides routinely fell well short of quotas. After 1863, federal draft evasion was highest in the nation in Cincinnati and Louisville. Anti-war dissent was strongest in the Ohio Valley, where Democratic “Copperheads” violently contended with Republican “Loyal Leagues” and federal garrisons in the dusty streets of its towns and cities. To oppose emancipation and Lincoln’s reelection in 1864, in Washington County in southern Indiana whites violently drove out or murdered African Americans in the first “racial cleansing” incident in U.S. history. Democratic legislatures in Illinois and Indiana upheld harsh anti-black immigration laws until the end of the war, when Republican majorities undid them.

In Cincinnati, with a long history of race riots and wartime dissent, returning black war veterans were attacked in its streets by white federal soldiers, all still in uniform. Ohio’s legislature rescinded its initial ratification of the Fourteenth Amendment, which gave citizenship rights to freed people, and soundly rejected the Fifteenth Amendment allowing black voting, the first in the nation to do so. “KuKlux” and “whitecaps” soon plagued many areas of these states. Ohio’s Democratic state legislature did not ratify the Fifteenth Amendment, and quickly rescinded its vote for the Fourteenth. Antagonisms from the war carried over into decades of daily personal politics between neighbors, undergirding a pervasive irreconcilation over the war and especially black freedom.

By the 1920s, the Ku Klux Klan boasted its largest membership in Indiana and sundown towns were a facet of small town life throughout the border region. To obscure the region’s angry traditionalism, especially racial, small town boosters coined the term “Midwest,” associated with pastoral progressivism, to overwrite the war memory created by former dissenters who didn’t fully side with the victorious North over emancipation and opposed the modern urban ethos that victory had ushered in. The states below the border, as historian E. Merton Coulter quipped in print in 1926, “waited until the Civil War was over to secede.”

Ironically, the southern “Lost Cause” saw its genesis not in the former Confederacy but in these border slave states, whose claim to full inclusion was tenuous. Missouri boasted the first-ever Confederate monument, erected in 1864 to guerrillas, a warping of the valorous war narrative.  The forerunner of the United Daughters of the Confederacy was also born there. Kentucky offered the apotheosis of Confederate memory. In 1924, the 351-foot Jefferson Davis birthplace monument was dedicated in Fairview, Ky., and four years later the state’s legislature selected “My Old Kentucky Home,” Stephen Foster’s sentimental “plantation” ballad depicting a slave’s longing for Kentucky, as the state song. In yet another irony, Foster, a former Cincinnatian, was inspired to compose the song by the antislavery novel, "Uncle Tom’s Cabin," written by another former resident, Harriet Beecher Stowe. None of its original references to slavery is today sung. But in Maryland, residents sing unvarnished lyrics of their state song, of despots’ boots defiling sacred soil and urging residents to “spurn the northern scum.” Native son James Ryder Randall’s 1861 poem turned wartime rebel battle hymn, “My Maryland” serves warning against outsiders’ overweening power, governmental and societal. Judged as America’s most martial poem, among its lyrics is Sic Semper [Tyrannis]!, Marylander John Wilkes Booth’s exultant deus vult after fatally shooting Lincoln at Ford’s Theater.

“Whatever the engines of history actually are,” writes historian David W. Blight, “the legacies of the American Civil War have tended to subside and reemerge in a never-ending succession of revolutions and counter-revolutions.” What is keenly understood is that those revolutions have never been universally experienced or reconciled. Many of the realities of the Civil War in the border states, free and slave, have been submerged by counterrevolutions in the form of national narratives, such as those told by Ken Burns, that reduce the war and its meaning to binary form: slavery and freedom, North and South. In Baltimore, Ferguson, St. Louis, and Cincinnati we are perhaps witnessing not so much an unfinished revolution but one long suppressed, an irreconciled legacy of this unreconstructed middle ground of the Civil War.