Roger Stone Likens Trump's 'John Miller' Alias to the Pen Names of the Founding Fathers
“This is ridiculous,” Stone blasted. “James Madison, John Adams, Alexander Hamilton — they all wrote under pseudonyms, they all had things they wanted to say and they wrote under pseudonyms.”
Teacher Sorry for Comparing Special Needs Student to Hitler
A Pennsylvania school teacher has apologized for writing emails saying that accommodating a special needs student was similar to appeasing Adolf Hitler.
The (Wilkes-Barre) Citizens' Voice ( http://bit.ly/1WCpT7Z ) says Wyoming Area School District teacher Amy Kosko issued the apology Monday.
The elementary school teacher is apologizing for emails sent in 2014 when school officials were following up on an educational plan for the girl, who has a learning disability.
'Obama Was a Gay Prostitute' Candidate Invokes Hitler to Defend Her Fear-Mongering
Mary Lou Bruner, the Texas Republican who believes President Barack Obama once worked as a gay prostitute to support a drug habit, is now invoking Hitler in response to allegations of fear-mongering from her opponent.
Bruner faces Kevin Ellis in a May 24 runoff in the GOP primary for the District 9 seat on the State Board of Education. Ellis is accusing Bruner of fear-mongering for suggesting, among other things, that children who say that abortion is wrong or that global warming is real during school risk being taken away from their parents by Child Protective Services.
In response to Ellis' allegation, Bruner told The Texas Tribune there's plenty of reason to be afraid of "elites in the federal government that are trying to give us a one-size-fits-all, top-down education system."
“If that is fearmongering, I wish people had spoken out harder and heavier in Germany before Hitler took over,” Bruner said. “We should be scared when they want to take away from us what our government was built upon and totally revamp it and make it like the socialist and communist countries of the world.”
The last recorded lynching in Virginia took place 90 years ago
Raymond Bird, a black man accused of having sex with a white woman, was reportedly asleep in jail in the western Virginia town of Wytheville when the mob arrived.
According to historical accounts, there were at least 25 men — all armed, all masked. On Aug. 15, 1926, they rousted Bird from his cell, shot him, tied him to the back of a truck and dragged him for more than nine miles. When the truck stopped along State Route 699 in Wythe County, the mob left Bird’s lifeless body hanging from a tree.
That grisly murder nearly 90 years ago was the last recorded lynching in Virginia. A recent report has shed light on how common such vigilantism was in the South. Between the end of Reconstruction in 1877 and 1950, there were 4,075 “racial terror lynchings” in the region, according to the Equal Justice Initiative.
The World War I Plan To Turn America's Trees Into Telephones:  The short, happy life of the Floraphone
In 1904, [George] Squier was stationed at Camp Atascadero in California. It was a particularly hot, dry summer, and the soldiers' Army-issued buzzer telegraph and telephone kits, which relied on moisture to receive and transmit signals, were pretty much useless. Squier quickly grew tired of being stranded out in the field, cut off from everyone, so he mixed his engineering skills with his military instincts and started tinkering with the resources he had available.
Soon, he hit on a simple fix: wire the kits to a nearby eucalyptus tree, and the messages come through fine. Further experimentation revealed the best configuration: a long, insulated wire, nailed two-thirds of the way up the trunk, attached to a receiver and grounded by a few more wires buried in a radial configuration around the roots.”...
Despite such triumphs, the floraphone's heyday was short-lived. Quickly outpaced by more portable and effective antennae, it now lives alongside bat bombs, iceberg airbases, and artichoke ink in the annals of war technology made goofy with time. 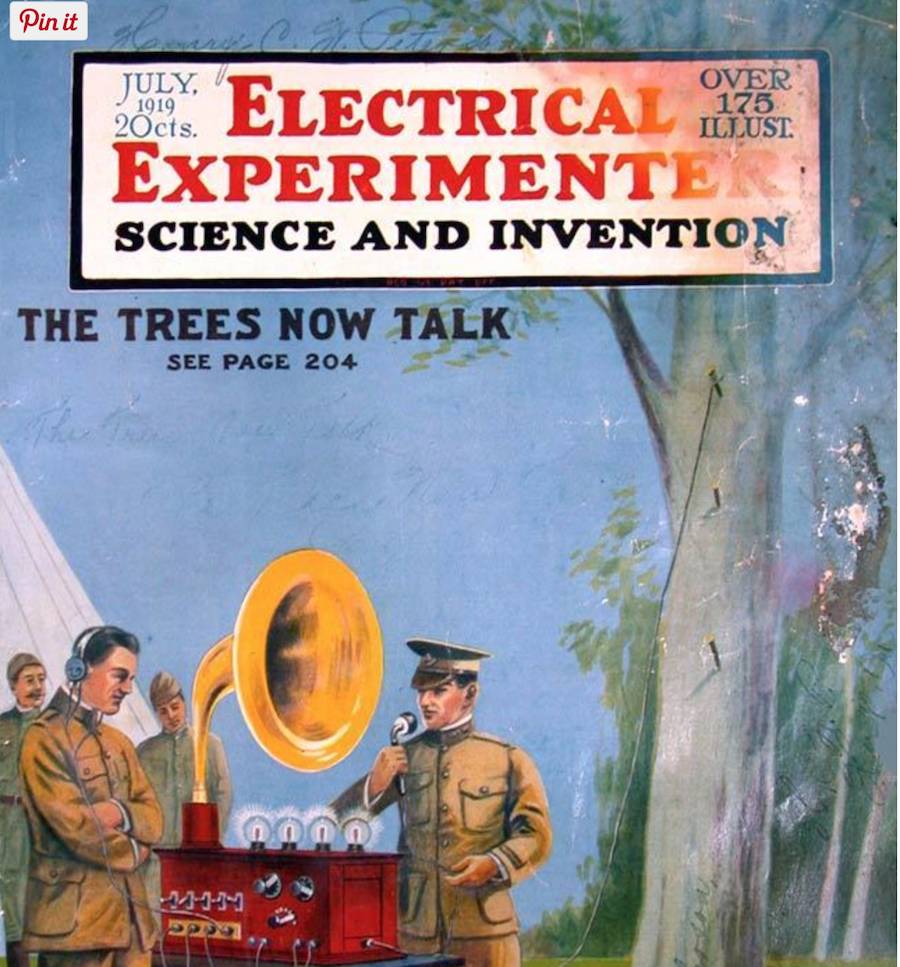