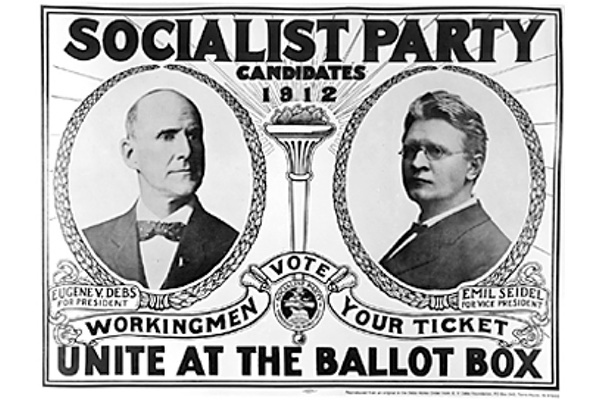 Democratic socialism used to be a vibrant force in American life. During the first two decades of the twentieth century, the Socialist Party of America, headed by the charismatic union leader, Eugene V. Debs, grew rapidly, much like its sister parties in Europe and elsewhere: the British Labour Party, the French Socialist Party, the Swedish Social Democratic Party, the Australian Labor Party, and dozens of similar parties that voters chose to govern their countries. Publicizing its ideas through articles, lectures, rallies, and hundreds of party newspapers, America’s Socialist Party elected an estimated 1,200 public officials, including 79 mayors, in 340 cities, as well as numerous members of state legislatures and two members of Congress. Once in office, the party implemented a broad range of social reforms designed to curb corporate abuses, democratize the economy, and improve the lives of working class Americans. Even on the national level, the Socialist Party became a major player in American politics. In 1912, when Woodrow Wilson’s six million votes gave him the presidency, Debs―his Socialist Party opponent―drew vast, adoring crowds and garnered nearly a million.

This promising beginning, however, abruptly came to an end. Socialist Party criticism of World War I led to a ferocious government crackdown on the party, including raids on its offices, censorship of its newspapers, and imprisonment of its leaders, including Debs. In addition, when Bolshevik revolutionaries seized power in Russia and established the Soviet Union, they denounced democratic socialist parties and established rival Communist parties under Soviet control to spark revolutions. In the United States, the Socialists fiercely rejected this Communist model. But the advent of Communism sharply divided the American Left and, worse yet, confused many Americans about the differences between Socialists and Communists. Although the Socialist Party lingered on during the 1920s and 1930s, many individual Socialists simply moved into the Democratic Party, particularly after its New Deal programs began to steal the Socialist thunder.

The Socialist Party’s situation grew even more desperate during the Cold War. With the Communists serving as cheerleaders for the Soviet Union, Americans often viewed them as, at best, apologists for a dictatorship or, at worst, subversives and traitors. And the Socialists were often mistakenly viewed the same way. By the 1970s, the once-thriving Socialist Party was almost non-existent. Some of its remaining activists, led by Michael Harrington, broke away and organized the Democratic Socialist Organizing Committee, which later morphed into Democratic Socialists of America―a group that dropped third party campaigns, called attention to the value of democratic socialist programs, and worked with progressive forces in the Democratic party to secure them. But, for several decades, it made little headway.

And, then, remarkably, democratic socialism began to revive. Of course, it had never entirely disappeared, and occasional polls found small-scale support for it. But, in December 2011, a startling 31 percent of Americans surveyed by the Pew Research Center said that they had a positive reaction to the word “socialism,” with young people, Blacks, and Hispanics showing the greatest enthusiasm. In November 2012, a Gallup survey found that 39 percent of Americans had a positive reaction to “socialism,” including 53 percent of Democrats.

Why the rising tide of support for socialism in recent years? One key factor was certainly a popular backlash against the growing economic instability and inequality in America fostered by brazen corporate greed, exploitation, and control of public policy. In addition, college-educated young people―saddled with enormous tuition debt, often under-employed, and with little recollection of the Soviet nightmare―began to discover the great untold political story of the postwar years, the remarkable success of European social democracy.

Of course, Bernie Sanders played an important role in this public reappraisal of democratic socialism. Once a member of the Young People’s Socialist League, the youth group of the old Socialist Party, Sanders forged a successful political career as an independent, serving as a popular mayor of Burlington, Vermont, a U.S. Congressman, and, eventually, a U.S. Senator. During these years he consistently attacked the greed of the wealthy and their corporations, assailed economic and social inequality, and stood up for workers and other ordinary Americans. For many on the American Left, he provided a shining example of the continued relevance of democratic socialism in America.

Sanders’s plunge into the Democratic presidential primaries, though, drew the attention of a much larger audience―and, as it turned out, a surprisingly sympathetic one. Although the communications media were quick to point out that he was a socialist, a fact that many assumed would marginalize him, he didn’t run away from the label. Perhaps most important, he presented a democratic socialist program in tune with the views of many Americans: universal healthcare (Medicare for All); tuition-free public college; a $15/hour minimum wage; increased Social Security benefits; higher taxes on the wealthy; big money out of politics; and a less militaristic foreign policy.

This sounded good to large numbers of voters. In June 2015, shortly after Sanders launched his campaign, a Gallup poll found that 59 percent of Democrats, 49 percent of independents, and 26 percent of Republicans were willing to support a socialist if he were the candidate of their party. This included 69 percent of Americans 18 to 29 years of age and 50 percent of those between 30 and 49 years of age. To the shock (and frequent dismay) of the political pundits, Sanders’s poll numbers rose steadily until they rivaled those of Hillary Clinton, the presumed Democratic nominee, and he won 20 of the Democratic state primaries and caucuses conducted so far. Indeed, polls showed that, if he became the Democratic nominee, he would win a landslide victory in the race for president.

But whether or not Sanders reaches the White House, it’s clear that democratic socialism has made a comeback in American life.