You remember this painting of George Washington wrong 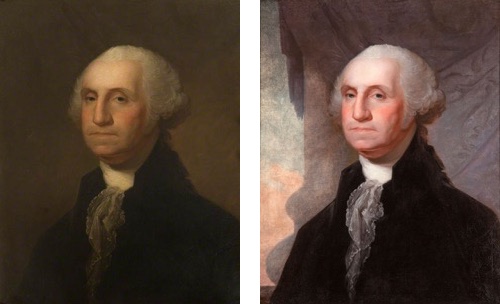 When the Sulgrave Manor Trust commissioned the conservation of this Gilbert Stuart painting of George Washington (left), the resulting work (right) showed the painting had a story to tell under its dark background. The painting is still undergoing treatment and is shown here in an early stage of restoration. (Photo Credits:  Mulgrave Manor for the image on the left; Nathan Portlock-Allan Photography for the image on the right.)

A painting of George Washington which was recently sent for conservation has yielded surprises for its owners, the Sulgrave Manor Trust. The organization oversees the Tudor home of George Washington’s ancestors in the Northamptonshire village of Sulgrave, near Banbury.

On close examination, conservator Valentine Walsh noted that what was thought to be a solid dark background of this 18th-century oil painting actually had a curtain in the top corners. This led her to X-Ray the painting to see what other details might lay below the murky overpaint covering most of the background. Removing the overlying layers revealed that portraitist Gilbert Stuart had originally painted a large column, swag curtains and sky with pink clouds behind Washington.

Stuart made many portraits of Washington, including a run of more than 70 called the “Athenaeum” series portraits, one of which appears on the American one-dollar bill.  These paintings all show Washington’s head and shoulders against a plain dark background.

Sulgrave Manor’s painting stands out from the series, both because of its background and its slightly larger size. According to Gilbert Stuart expert Ellen Miles, Curator Emeritus at the National Portrait Gallery in the US, it may have been a study for a larger painting, such as the National Portrait Gallery’s Lansdowne Portrait, a full-length depiction of Washington. The cleaning has revealed that the shoulders, hair and cravat were reworked, which suggests that Stuart was painting from life, rather than copying a formula. Conservation and research continues on the portrait, which will return to the Manor for its summer opening. Even before these recent discoveries, the painting was considered the Manor’s greatest treasure.

The restoration was originally funded through the sponsorship of the London-based Walter Hines Page Chapter, National Society Daughters of the American Revolution, and matching funds from the US-based Friends of Sulgrave Manor charity. The National Society of The Colonial Dames of America is paying for the further research and conservation prompted by these unexpected findings.

Although Stuart was born in America, he moved to England in 1775 and studied painting in London under the guidance of American painter Benjamin West, before eventually returning to the United States.

This portrait was donated to the Manor in 1920 by American banking heiress Miss Faith Moore. She and her sister, Viscountess Lee of Fareham, had, in 1917, bought the country house, Chequers, which was later donated, with its contents, to the nation to provide Britain’s Prime Ministers with a country residence.