The Fort McMurray Fire is Nature’s Act of Revenge

The Fort McMurray fires startle less because they announce a new normal than because they return to an old one. Canada hasn't seen this kind of urban wreckage from a bush fire since the 1920s. It's like watching the return of the plague. Yes, the modern avatar has some new traits, and, yes, the 2003 Kelowna and 2011 Slave Lake fires were dress rehearsals, and, yes again, history is rhyming, not repeating, but we've seen this scene before and had thought it well over and gone. The wildland fire community generally has a historical horizon of three years - last year, this year, next year. It might want to widen its field of vision. 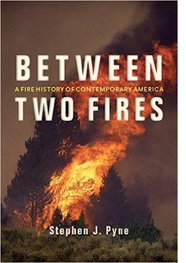 It's too early for post-mortems, though the basics are known. A fire-thirsty biota, dry springs with stiff winds, and an unbroken plain - these are constants that from time to time compound into catastrophe. The boreal forest burns in stand-replacing patches; the patches have grown larger over the past decades with shifts in fire regimes. Probably, too, global warming has lengthened seasons and sharpened the spikes of burning. But the region has a long legacy of big fires. The 1950 Chinchaga fire started on the first of June and burned through October 31, scorching 3 million acres from northeast B.C. across Alberta. It was part of a cluster that rolled over an estimated 4.8 million acres. The difference is that this time there was a substantial town in its path.

It was clear why towns burned in settlement times. They were made of wood: they were basically reconstituted forests. There were fires all around, not only those of nature, but the far greater number kindled by people, many of them abandoned. Those knocked-together towns burned like an eccentric woodlot.

Then those serial conflagrations stopped. The towns dried up or matured. People quit lighting and leaving fires. Fire protection stiffened, capable of finding and quenching most fires while they were small. With time the forests recovered from that flaming front of a raw frontier and restocked their combustibles. Modern cities, in particular, built to fire-code specifications ceased to burn unless leveraged by earthquakes or wars that broke down the capacity to fight hundreds of ignitions simultaneously.

Now cities are burning again. These are new settlements, either modern versions of frontier towns, though to higher standards, or amenities communities, for which the proximate bush is an attraction. But lessons once learned have become lessons lost as we've recreated the old order out of new materials. Wildland-urban interface fire is an awkward, geeky term, but it captures something of the slap-dash jumbling of environmental matter and anti-matter that accounts for the episodic explosions. Still, although the fires come out of the wildlands, once past the front fringe of houses, they burn as urban fires.

What strikes the eye is just that contrast between forest and town, and the apparent transgression of flames crossing from one to the other. But what strikes my mind is the contrast between two realms of combustion. One burns living landscapes; the other, lithic landscapes. In image after image they abut: blasts of wildland fire and streamers of cars on macadamized highways, soaring flames and convoys of fuel trucks, the boreal bush and oil sand mines, the two great fuels of our time.

The usual understanding - my understanding, at least - is that those two realms tend to compete. They don't willingly coexist: one or the other prevails. There may be a period of transition, perhaps over decades, but where modernity plats its stakes, internal combustion substitutes for or suppresses open burning. In a sense, the Fort Mac fire is blowback, an act of revenge that burned a good chunk of the city, drove off its inhabitants, and shut down, by smoke if not the direct threat of flame, the regional oil sands industry.

But in a deeper sense we may be witnessing the shift from competition to collusion. The oil sand industry is an egregious producer of greenhouse gases. Whatever its contribution to this particular fire, a fossil-fuel civilization is unhinging the Earth's climate, reshaping its landscapes, and plunking towns like Fort McMurray cheek to jowl with combustible bush. Its output has a multiplier effect on planetary combustion, and together they are pushing us into a Pyrocene. Canada's environmental history begins with an ice age. Its future may be a fire age.

The boreal biota needs to burn. Oil sands don't. And neither does Fort McMurray.