When Socialists Won Elections (and Where)

Jim Gregory is a Professor of History at the University of Washington and President of LAWCHA.

Bernie Sanders has come close. And in doing so he has demonstrated that in 2016 the label democratic socialist is no longer a third-rail in American politics. This makes it a good time to talk about American political history and to contemplate the socialist movement of a century ago, when socialists won elections in more than 350 cities and towns, when more than 380 weekly and daily newspapers affiliated with the Socialist Party, when socialism was popular in states and counties that now vote solidly conservative.

A new set of online maps and tools shows the historical geography of American socialism in ways that have never before been possible.

In two dozen interactive maps and charts, users can explore the where and the when of the Socialist Party’s infrastructure and popular support from 1900 to 1948. This new section of the University of Washington’s Mapping American Social Movements project makes sharply visible what historians have until now tried to describe in words alone.

It is one thing to say that more than 1,000 Socialist candidates were elected to office between 1900 and 1924 and quite another to see the election victories spread across a map as it changes year by year. Some of these places are well known—Milwaukee, Bridgeport, Reading, Berkeley, Butte—but now we see details on so many others. The 41 Ohio municipalities that elected Socialists ranged in size from tiny Warsaw with 512 residents and a couple of flour mills and a wire factory to mighty Cleveland with a population of 550,000 in 1914. Click on any of them in the active map below and see who was elected and when. There are additional interactive vizualizations available in the “Socialist Party of America History and Geography” pages. 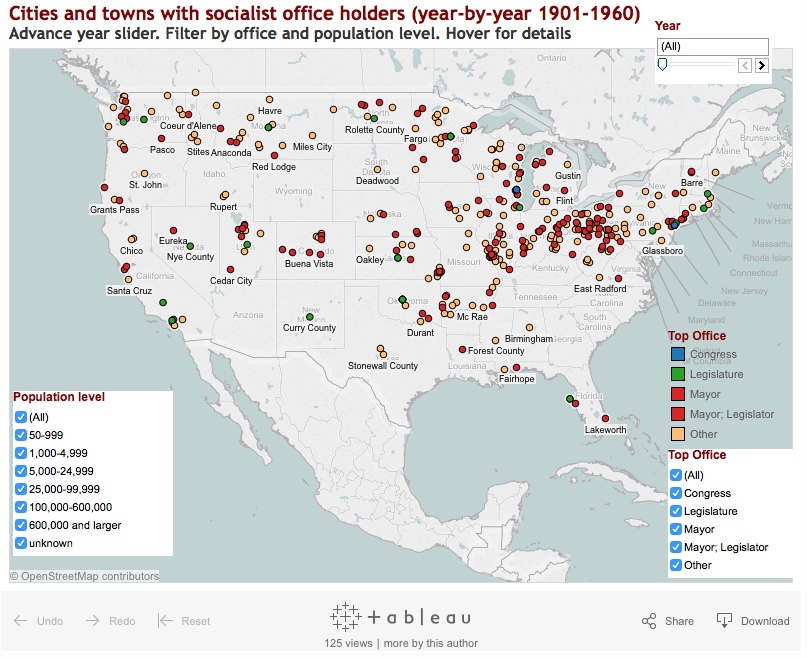