Despondent, Divided, and Angry. Welcome to the Past.

Thomas M. Grace holds a PhD in History, and is the author of the new book Kent State: Death and Dissent in the Long Sixties. Allen F. Richardson, also a Kent alumni and May 4th witness, contributed to this piece. 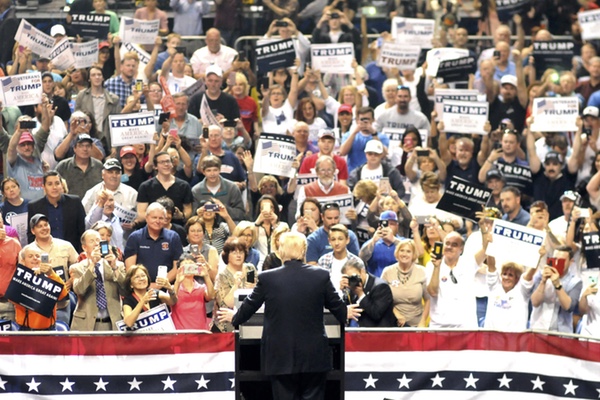 Reflecting on campaigns going back to 1960, I’m convinced that I will have seen most everything—sometimes twice.

Now, with the primary season stumbling toward an uncertain summer, we hear words many thought were consigned to history—the Silent Majority, Reagan Democrats … even Political Revolution.

The Democratic Party is split between its pragmatic, older voters, and a young, idealistic base—with the moderate-right frontrunner getting inexorably pulled to the left.

Then there is the spectacle of a Republican party that features two “outsiders” fighting their own so-called establishment—which yearns to dump its bombastic front-runner.

Such GOP tensions raise the possibility of a third party bolt, throwing what’s already an ugly circus into utter chaos. That could easily produce what Marx had in mind, though whether the outcome is tragedy, farce—or both—remains to be seen.

For the moment, however, the focus is on the possibility of contested conventions—especially so in Cleveland. But that’s not the real story in today’s 24/7 news cycle, despite the incessant talking of talking heads. Rather, it’s a reflection of today’s America.

That’s an obvious point, of course, but one that makes it irresistible to examine another time when the nation was so despondent, divided, and angry—1968.

Back then, some candidates, were accused of pandering to the voter’s worst instincts—including racial intolerance for entire sectors of the population—and of whipping up fears of the enemy, both within, and without.

Some spoke with such recklessness that chroniclers of the campaign saw it verging on “bloodthirstiness,” while they, or their surrogates, threatened protesters (or convention delegates)—with bodily harm.

Using language that is echoed in 2016 American Independent Party candidate George Wallace often promised that “If any demonstrator lies down in front of my car … that’ll be the last car he lays down in front of.”

By contrast, the candidates in 1968 were also viewed as lackluster or unlikable. In modern parlance, all sported a high measure of “negative electability.”

The resulting stew handed the ultimate prize to Richard M. Nixon, who, at the time, captured the smallest share of voters in a half century. Historians contend that it confirmed a long-term trend toward the right. If so, what does the election of 2016 portend? A shift back to the left after 40-odd years of wage stagnation? Renewed American isolationism, or a more strident foreign policy? The further evisceration of labor rights and safety net programs?

With the 2016 Republicans heading for Cleveland this July, the threat exists for disorder—both inside and outside—the Quicken Loans arena, or some further variation on Chicago in 1968—when the country’s divisions actually led to blood in the streets. It’s even less comfort when I think that the university I attended is less than an hour’s drive south.

Already verging on a hotbed of activism, Kent State was home to thousands of students from Ohio’s ethnic working class—many among the first in their families to attend college. Adding diversity was a growing number of African Americans, and thousands of students from eastern locales. During the election—although many were not yet of voting age—the student body divided over the candidates, reflecting the world outside.

But worse would come. Two years later, the seeds planted in 1968—meshed with the building tension of the long 1960s—exploded in a 13-second volley, unleashed during an antiwar protest. It happened five days after Nixon expanded the war by invading Cambodia. Four students were killed, and nine—including myself—were wounded.

Almost 50 years later, I think about how profoundly 1968 served as a warning that “elections do matter.” In Chicago, the idealistic young, supporters of Eugene McCarthy watched in distress as a peace plank was defeated—although it’s likely that a Hubert H. Humphrey administration would have inevitably bowed to the massive antiwar pressure in his Democratic Party.

In Florida, Nixon was quietly nominated without any such impetus, leaving him free to pursue his “secret plan” to end the war without needing to explain how. For his part, Wallace, the hawkish third party candidate, kept promising to “win the war,” with his running mate, Ohioan Curtis LeMay, promising to bomb North Vietnam “back to the Stone Age.”

Intent on stopping the war that candidates seemed certain to continue, student activists from Akron, Cleveland, and other cities organized that summer as the 1968 election unfolded. High school graduate Jeff Powell, who grew up in a working class suburb of Akron, drew on the influences of his parents’ open-minded racial views, family traditions of labor radicalism and Catholic moralism. Kent student Ric Erickson was the son of Akron’s former mayor, a liberal Democratic. Cleveland’s Howie Emmer, the son of radical parents, had been among the first at the university to oppose the war. Undergraduate Tom Zamaria was a Vietnam veteran from blue-collar Warren.

All four went to Chicago, witnessed police beatings, were arrested or had their own near escapes. While in custody for a curfew violation, city police threatened and terrified the youthful Powell. Erickson, newly radicalized after he saw conservative Kent State students harass their own, said he wanted to “confront institutions … that support racism and the war in Vietnam.” Zamaria left late, but eventually joined in, prompted by the sight of “my people getting beat on the head by cops.”

After the conventions, Kent State students made their presence felt at both Wallace and Nixon rallies. (Humphrey had chosen Kent State to make one of the earliest stops in his campaign, in May 1968, and was greeted by a walkout organized by both black and antiwar students that garnered national press coverage.)

In late September, enthusiastic students met Humphrey at the Cleveland airport, where he told them “young people can be the difference in this campaign.” But when he proceeded downtown, he was met by a gaggle of angry protestors. Weeks later, Democrat Ted Sorensen came to Kent and was confronted by Erickson, who like many student dissenters had given up on electoral politics after Chicago. “Social change … won’t come from the top down,” Erickson said to Sorensen, “it won’t be decided on election day.”

Scuffles broke out in Canton on October 3, where a Wallace “strongman” punched a female reporter from Kent State’s student newspaper. In Akron, SDS members dressed as Klansman met Wallace. In response to this political theater, Akron police—who by their own admission overwhelmingly favored Wallace—arrested several African American demonstrators, while ignoring Wallace supporters who tore signs from the hands of protestors.

In Cleveland, Wallace appeared before 4,500 supporters, and 800 protestors in the city’s Public Auditorium. After drowning out the candidate, the protestors moved outside, where they were attacked and several were severely beaten by the police, egged on by Wallace supporters.

Meanwhile, Nixon received similar treatment. In Akron on October 10, the former vice-president encountered what Time magazine described as “serious heckling for the first time [in his campaign]” that turned his rally into a “shambles.”

At first, Wallace and Nixon gained in the polls by verbally bashing the protestors, and turning them into the enemy. On the other side, Humphrey’s “politics of joy” fell flat initially—despite his stellar labor and civil rights record—after so many years of defending Vietnam policy.

By mid-October, organized labor struck back. Albert Canfora, Sr., a UAW leader and father of a Kent State student who was later wounded on May 4, was one of the many unionists who worked tirelessly against what he saw as Wallace’s phony populism and appeal among the working class. Across the state, the UAW and AFL-CIO launched a furious counter-offensive, citing the dismal per capita income and illiteracy rates in Wallace’s home state.

It worked, but not enough. Wallace’s numbers dropped, and Nixon went from a lead of 14 percent in Ohio to just 2 percent on Election Day.

With their dwindling numbers today, it’s unlikely that the unions will have as much sway in 2016. Still, it is important to note that in Ohio, candidate John Kasich failed to get an anti-labor law similar to those Gov. Scott Walker got passed in Wisconsin.

In November of this year it is now apparent that the electorate will have one of two, or perhaps three choices, and there will be massive discontent with those, just as there was in 1968. Then, most Americans could not imagine what the future held for them. Today, it’s likely that many will cast their votes without full awareness of how it will affect them later.

The anger and frustration that finally bubbled up in 2016 over the economic and foreign policies pursued during the preceding decades are what drive this election. That it took as many as 40 years to become obvious, and finally cause such a profound reaction, is perhaps surprising. But one thing is clear. Depending on who is elected president in 2016, one can only wonder at the world we leave our children.