Can the Weather Affect Presidential Elections?

Brian Johnson is a student at George Mason University and an HNN intern. 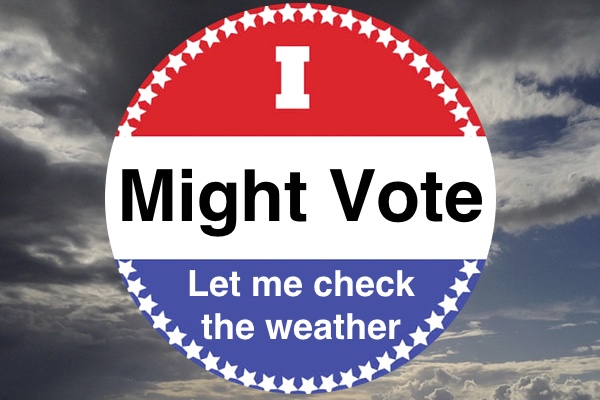 It may seem unlikely that an uncontrollable variable such as the weather could cost a candidate a seat in the Oval Office.  Yet recent research has shown that throughout the twentieth century American presidential elections have repeatedly been affected by the weather.  Two studies in particular have found evidence in support of the theory that the weather can directly affect the outcome of elections.  Alas, they don’t agree on the effect the weather has.  Rain can hurt a candidate but so can a drought. Let’s sort things out.

A study by Brad Gomez, Thomas Hansford, and George Krause reveals the relationship between bad weather and lower turnout. This study utilized weather forecasts from the National Climatic Data Center in order to measure the effect of the weather on elections in each county of a state. In total the researchers made 43,340 observations over the course of 14 presidential elections involving 3,115 counties.

Here’s what they found.  While voters are typically acclimated to normal weather patterns, above average precipitation on Election Day can severely decrease turnout. Gomez, Hansford, and Krause found the greatest effect came with heavy rainfall in Tunica County, Mississippi, during the election of 1972. A resounding 3.8% of eligible voters who otherwise would have participated failed to show up because of 4.35 inches of rain.  Overall, an inch more of rain on Election Day decreases turnout in a county by 0.9%. Snow is also a factor.  Every inch of snow above the average decreases voter turnout by 0.5%.

Which party is helped by bad weather? The Republicans. According to Gomez, Hansford, and Krause “peripheral voters” – those inclined to support Democratic candidates – are most likely to be affected by bad weather.  “In addition to its direct effect on voter turnout, we have shown that bad weather may affect electoral outcomes by significantly decreasing Democratic presidential vote share, to the benefit of Republicans,” they write.

Their model suggests that dry weather on Election Day in Florida in the all-important 2000 race might have helped Al Gore win Florida and the presidency.  Unfortunately for Gore, it rained in many places, deterring his voters from going to the polls. 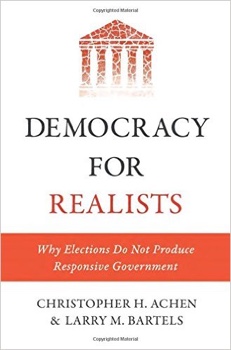 Christopher Achen and Larry Bartels in Democracy for Realists argue that “voters consistently and systematically punish incumbents for conditions beyond their control.” Rather than focus on the effect of the weather on Election Day turnouts, Achen and Bartels analyze the effect of bad weather on the way people actually vote. In their study they found that an estimated 2.8 million people nationwide voted against Al Gore in 2000 because of either droughts or floods.

Achen and Bartels found that natural disasters (excessive flooding or sustained droughts) reduce support for the incumbent political party.  This happens with both Republicans and Democrats.  If voters are suffering they take out their anger on the party in power.  Sustained bad weather is one of those factors that affect how voters feel.  If the pain is acute, the incumbent is likely to suffer at the polls. This happens despite the fact that politicians can’t control the weather. Voters blame their leaders when their standard of living drops below normal expectations.

Conclusion: Voters are not always rational and do not always act in their own best interest. Nearly 4% of the voting population in Tunica county, Mississippi did not go out to vote because of the above average rainfall that election day.  Rain prevented people from participating in a crucial civic duty that could directly affect their life.  So in answer to the question we posed at the start:  Yes, weather, without question, affects elections.