Remember the Maine? This Is How that Event Looks Like from the Cuban Perspective.

Joseph J. Gonzalez is Assistant Professor in the Interdisciplinary and Global Studies Programs at Appalachian State University.  He first went to Cuba in 1996.  He is now at work on a book-length study of the first decade of U.S.—Cuban relations following independence titled "Inventing the Cuban Republic:  From Nation-Building to Empire, 1898-1909." 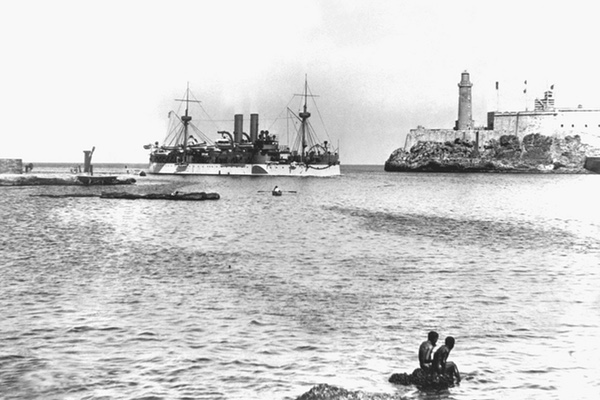 On February 15, 1898 the battleship U.S.S. Maine exploded in Havana harbor.  Americans blamed the Spanish, who then governed Cuba as a colony, and soon marched off to war crying, “Remember the Maine.”  By July, U.S. troops had ended Spanish rule in Cuba.

For decades thereafter, Americans remembered the Maine as the beginning of a struggle against tyranny that ended in freedom for Cubans.  In history textbooks, Americans congratulated themselves on their willingness to sacrifice for others.

Today, most Americans have forgotten the Maine and the Spanish-American War.  Cubans, however, have never had an opportunity to forget.  The year 1898 was the moment they traded one colonial master for another.

When U.S. troops left Cuba in 1902, they did not leave Cubans to govern themselves.  As the price of independence, the U.S. government forced the Cubans to sign a treaty allowing it to intervene in the affairs of Cuba whenever it wished.

And the U.S. government intervened a lot.  From 1902 to 1959, the U.S. Ambassador was the most powerful man in Havana.  He made and unmade presidents, initiated or halted coups de état, all with the support of U.S. troops.  Meanwhile, U.S. businesses (even the Mafia) dominated the Cuban economy.

Fidel Castro and his barbudos ended U.S. domination of Cuba in 1959—and the relationship between the United States and Cuba got worse.

Why?  Americans have their explanation, and it involves expropriation of U.S. property, support for worldwide revolution, and disrespect for basic human rights, along with Soviet missiles pointed at the East Coast of the United States in 1962.

There is truth in this point of view.  But there is also truth on the Cuban side.  According to the Cubans (and not just official Cubans, but Cubans I have known for years), the United States has spent the last several decades trying to re-subjugate Cuba.

Cubans point to the Bay of Pigs, President Kennedy’s ill-fated invasion of April 1961, and they maintain that those missiles of 1962 existed only to prevent another U.S. invasion. They remember those jailed and executed Cubans as U.S. agents or former employees of the hated dictator, Fulgencio Batista, while they recall acts of terror perpetrated by Cuban exiles and repeated attempts to assassinate Fidel Castro.

But most of all Cubans point to the embargo.

Following Fidel’s expropriation of U.S. property, America’s leaders terminated all trade with Cuba, a policy that remains in force, despite President Obama’s recent reforms, to this day.   Cubans call the embargo, “el bloqueo,” the blockade.  They consider it a violation of their human rights, depriving them of access to markets, goods, and crucial medical supplies.

So why bring all this up, you might ask?  Surely, this is all in the past.  Why not focus on the future where things could hardly look brighter?  President Obama has just returned from Havana; the U.S. embassy is open, and hundreds of thousands of Americans will visit Cuba this year.   Trade is increasing, and recent polls suggest that a clear majority of Americans favor ending the embargo, including a majority of Cuban-Americans.

But a problem remains:  In our conversations with and about Cubans, Americans are demonstrating an ignorance of how the Cubans interpret their history.

And to the Cubans such ignorance will seem patronizing.  It may also seem as if Americans are once again treating the Cubans like backward colonial subjects in need of guidance.

At times American ignorance manifests itself in subtle ways, as when journalists portray Cuba as a backward nation, stuck in the past and lacking modernity.   At other times it’s more obvious, as when President Obama during his recent visit urged the Cubans to speed up democratization and privatization or risk confronting a Republican president committed to the embargo.

Now, I admire President Obama for normalizing relations, visiting Cuba, and telling his fellow Americans to end the embargo.  But when he lectures the Cubans on their need to conform more quickly to U.S. expectations, or risk punishment, he is oblivious to the fact that—so far as Cubans are concerned-- Americans have done very little to promote democracy in Cuba.

And lectures from Americans do more than annoy Cubans.  They also damage the cause of democratic change because Americans (their former imperial masters) are arguing the case, rather than Cubans.  No Cuban wants to be seen as a Yankee collaborator.

What do Cubans want?  The Cubans I know do want more democracy and most take a cautious view of privatization; it all depends on whether or not they believe they will benefit.  They also want opportunities to provide for their families, access the Internet, and travel abroad.

But above all Cubans want respect.  They want Americans to recognize their “social achievements” in health care and education; they want Americans to appreciate their efforts to develop sustainably and reduce economic inequality.  Meanwhile dissidents quite rightly want American leaders to raise the issue of human rights with the Castro regime in private and in public.

But no Cuban I know wants Americans to tell them how to govern their country.

So I have a suggestion for U.S. leaders and journalists:  Take care how you address Cubans.  Understand that the history of U.S.—Cuban relations looks very different in Havana than it does in Washington, DC.  First and foremost, show respect, and avoid urging them to be more like Americans.

And realize that when it comes to promoting democracy, Americans have little credibility with Cubans.

Of course, American leaders should make clear their positions on human rights and democracy.  But U.S. leaders should understand that the Cuban government will open itself up to criticism and privatization at home, and investment from abroad, gradually and carefully, as officials feel safe and confident.  They remember what happened to Gorbachev.

Meanwhile, U.S. leaders would do well to remove impediments to reconciliation in Washington, such as ending an embargo that has brought nothing but misery and no democracy to Cuba.

Americans might even try a little humility.  Maybe apologize for the Platt Amendment?  Say a few words of praise for Cuba’s health care system?  To his credit, during his visit President Obama welcomed criticism from Cubans about the shortcomings of the American system.

Such gestures go a long way with Cubans.  Those I know can distinguish between the American government and the American people; they want reconciliation with the latter, and respect from the former.  As one Cuban economist friend of mine put it a year ago:  “It’s time to say no hard feelings, and get on with making a better future.”

This is a moment that will not come again:  Right now, all things are possible. If the U.S. government conducts itself with patience and humility, not to mention some historical awareness, the U.S.--Cuban relationship could become one of shared interests and shared values.

And then maybe, just maybe Cubans will be able forget about the Maine and all that the year 1898 brought to their country.

But until that day, Americans and Cubans both need to remember the Maine.