Brian Johnson, a student at George Mason University, is an HNN intern. 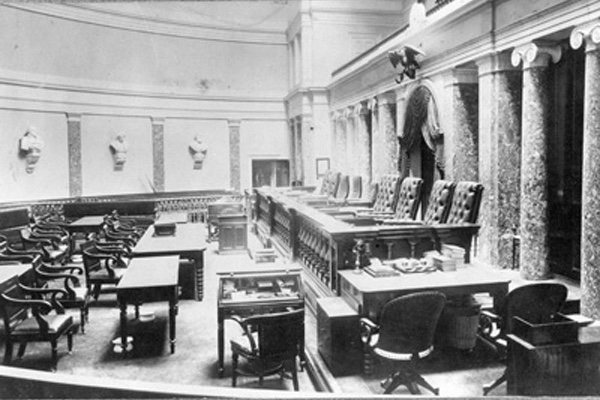 Mystery has recently shrouded the history of 1875, as the fight over the Supreme Court vacancy left by the late Antonin Scalia continues. The GOP has insisted they will not allow a hearing or vote to take place on any nomination made by the Obama administration. Both sides of the aisle have invoked history to defend their positions. Recently the White House released a fact sheet that indicated that since 1875 every Supreme Court nomination has received a hearing or vote from the Senate.

This left us wondering just what happened in 1875?

Dissecting this question requires consideration of the development of Senate confirmation hearings for Supreme Court nominations.

According to a 2009 Congressional Research Service report, since 1868 the Senate has referred almost every Supreme Court nomination to the Judiciary Committee, but did so, for much of our history, without the benefit of public confirmation hearings. The first supreme court nominee to face a hearing was George H. Williams, who was nominated for chief justice by President U.S. Grant in 1873. The hearing was held behind closed doors and was called to accommodate a small number of witnesses to testify against the nominee. Following strong opposition and negative press reports, President Grant was forced to withdraw the nomination.

There would not be another Senate confirmation hearing held for a Supreme Court nominee, either private or public, for the next forty years until Woodrow Wilson’s presidency. Professor Lucas Powe, a leading historian of the Supreme Court from the University of Texas at Austin, says that the process of public Senate hearings for nominations did not begin until 1916 with the nomination of Louis Brandeis. Brandeis’s public hearing lasted 19 days — the longest in history.

Between 1873 and 1916 there is no record of any Supreme Court nomination hearing taking place except for Williams and Brandeis. This report by the Congressional Research Service confirms Brandeis’s nomination was the first to trigger public hearings. Although this was an important precedent, the next six Supreme Court nominations (from 1916 to 1923) were either considered directly by the Senate, through the Judiciary Committee behind closed doors, or without referral to the committee.

Today’s process for Senate Supreme Court confirmation hearings require the nominee to be present for extensive questioning about their background and judicial philosophy. PolitiFact has explained that the modern format of public hearings combined with testimony from nominees started in 1955 with the appointment of John Harlan II.

So what’s the answer to the question we posed at the beginning? What exactly happened in 1875? Nothing, actually. So why did the Obama White House point to 1875 as a milestone of some sort? We have no idea. Maybe officials meant to write 1873. Call it a presidential typo.

But that’s not the only problem with the White House history. The fact is not every nominee to the Supreme Court since 1873 has received either a hearing or a vote. The administration claim that they have has been rated mostly false by PolitiFact. This is because many nominees were withdrawn by the president before the Senate took action. The White House subsequently acknowledged this.