We’ve Had a Dealmaker as a Candidate for President. It Was Stephen Douglas. Lincoln trounced him – with good reason.

by Harold Holzer and Norton Garfinkle

Harold Holzer and Norton Garfinkle are coauthors of the recent, A Just and Generous Nation: Abraham Lincoln and the Fight for American Opportunity, published by Basic Books.

Donald J. Trump is not the first presidential candidate to suggest that his self-proclaimed genius at hard-nosed deal making suits him perfectly to lead America (no matter the consequences to those who are dealt out). The mantra is hardly new. A century-and-a-half ago, a Democratic candidate for the White House conveyed an eerily similar message. But American voters of that day rejected deal-making as a primary qualification for high office. 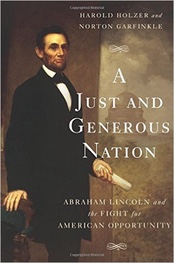 In the 1858 Lincoln-Douglas debates, and again in the 1860 presidential race, Stephen A. Douglas boasted that his deal-making prowess had made it possible for the North and South to end its long and bloody battle over slavery—without ever really confronting the moral horror the institution represented, or the brutality suffered by the people enslaved. The voters in 1860 not only rejected Douglas, but the deal itself—agreeing with Abraham Lincoln’s maxim that “a House divided against itself” could not stand.

Indeed, in 1858 and 1860, Douglas actually had far more claim to the title of national dealmaker than does Trump today. In 1854, the senator had miraculously managed to steer through a bitterly divided Congress the Kansas-Nebraska Act, the ultimate deal designed to postpone the inevitable national showdown over slavery. Under Douglas’s legislation, white settlers in the new western territories were empowered to vote on whether or not to permit slavery within their borders. The deal would surely lead to an end to slavery “agitation,” he claimed, and bring with it a transcontinental railroad and in the bargain the fulfilment of America’s Manifest Destiny.

But the moral consequences of the deal—or, rather, the absence of morality with which it was crafted—“aroused” former Congressman Abraham Lincoln back into politics. Four years after the Kansas-Nebraska deal, Republicans chose Lincoln to oppose Douglas’s bid for a third Senate term, and Lincoln challenged the incumbent to debate him throughout Illinois. (Ubiquitous as debates have become today, these were the first sustained campaign debates in American history.) Douglas used the 1858 “joint meetings” to defend his deal and insist (racial invective flying) that Lincoln’s opposition masked his secret desire to provide black men with equal rights—a position considered radical by most voters of the day.

Lincoln replied with a roar. How, he asked, could people in individual territories be invited to cast votes for or against an institution that degraded other human beings? How could the national government abdicate its moral responsibility to limit the spread of slavery and place it on the “course of ultimate extinction” as the Founders had planned? How could the dream of opening the West to free labor—to workers who could strive upward toward the American dream of middle-class life—be shattered by the importation of a permanent, unpaid laboring class of slaves?

Popular Sovereignty, Lincoln charged, was a “deceitful pretense.” It was an “arrant humbug.” What could now prevent pro-slavery whites from hopping from one territory to another, voting each time to legalize slavery everywhere they cast ballots? Indeed, the Supreme Court had all but struck down all limits on slavery with its infamous 1857 Dred Scott decision. No, Lincoln insisted, this deal could not stand. Unchallenged, it would allow “the people of a territory to have slavery if they want to, but does not allow them not to have it if they do not want it.” [Ottawa] Above all, it was inhumane—“teaching that the negro is no longer a man, but a brute; that the Declaration of Independence has nothing to do with him! That he ranks with the crocodile and the reptile; that man, with body and soul, is a matter of dollars and cents.” [Columbus] Not even the possibility of immediate gratification—a potential time-out in the debate and bloodshed over slavery—was worth the price that came with it: the abrogation of life, liberty and the pursuit of happiness.

Given the prevailing racial prejudice among white Americans, North As well as South, even Lincoln felt the political need to retreat from the high moral ground he had tried to occupy. In the fourth debate in 1858, Lincoln swore that he harbored no plan to make voters or jurors of black men, or permit intermarriage, acknowledging “a physical difference between the white and black races which I believe will for ever forbid the two races living together on terms of social and political equality.” Even from the depths of this “cringe-worthy,” expedient argument, Lincoln still managed to separate himself from Douglas’s aggressive racism by insisting: “I do not understand that because I do not want a negro woman for a slave I must necessarily want her for a wife.” Lincoln insisted that Douglas the dealmaker had no right to offer to spread black slavery for the economic convenience of Southern white settlers. If Douglas had his way—if he was permitted to make the deal on a national level—he would invariably “plant slavery over all the States—never speaking of it as in any way a wrong.”

At the time, Senators were still chosen by state legislatures, not direct votes of the people, and with Illinois Democrats retaining their majority thanks in part to gerrymandering, Douglas won re-election. But the intense political rivalry between the two politicians continued, and two years later, Douglas seemed poised to receive the Democratic nomination for the presidency, and defeat the dark horse Republican nominee, Abraham Lincoln.

In the ultimate brokered Democratic convention, fierce opposition came from Southern delegates who believed Douglas was not conservative enough. For these purists, deal-making proved a liability, not an asset. Slave-owners should be able to take their slaves anywhere, with no vote of approval required. Hopelessly deadlocked, with two-thirds of the delegates required for nomination, Southern pro-slavery forces stormed out of the convention, created their own political party, and put forth their own candidate. Douglas won nomination from what was left of the party, but at a price. Not even the “Little Giant” could compete in the fall election. In November, with only 39% of the popular vote, Republican nominee Lincoln swept to an overwhelming electoral majority over split opposition. His platform was straightforward: Slavery could not extend another inch westward.

As President-elect, Lincoln himself had the chance to make a Douglas-like deal—one that might conceivably have kept the country together, at least for a while longer: allowing Douglas-style “popular sovereignty” to dictate whether new states should be “slave” or “free,” after all. But Lincoln would not bite. “Let there be no compromise on the question of extending slavery,” he told Illinois’ other U. S. Senator. “If there be, all our labor is lost, and, ere long, must be done again.. . Stand firm. The tug has to come, & better now, than any time hereafter.” For “if we surrender,” he warned a Pennsylvania Congressman, “it is the end of us, and of the government.”

In the midst of that 1858 debate season, speaking to a large rally in the tiny town of Edwardsville, Illinois, Lincoln had warned against the kind of immoral politics—and politicians—that amoral deal-making could incubate. “What constitutes the bulwarks of our own liberty and independence?” he asked the crowd. “It is not our frowning battlements, our bristling sea coasts, the guns of our war steamers, or the strength of our gallant and disciplined army. These are not our reliance against a resumption of tyranny in our fair land.”

“Our defense is in the preservation of the spirit which prizes liberty as the heritage of all men, in all lands, every where. Destroy this spirit, and you have planted the seeds of despotism around your own doors.”

Stephen A. Douglas died only months after Lincoln became president. But ironically, his deal remained on the federal books through the first year of the Civil War. Not until June 1862 did Congress respond to Lincoln’s leadership and overturn the Kansas-Nebraska Act, officially banning slavery from all of America’s western territories. Three months later, Lincoln dealt with America’s most intractable hypocrisy in his own way: he issued the Preliminary Emancipation Proclamation. Moral leadership, not deal-making, had triumphed. Hopefully, history will repeat itself.