Would a Republican President Dare to Dismantle Obamacare?

Attorney Daniel E. Dawes is the executive director of health policy and external affairs at Morehouse School of Medicine and a lecturer within Morehouse's Satcher Health Leadership Institute and Department of Community Health and Preventive Medicine. He founded and chaired the National Working Group on Health Disparities and Health Reform and is the cofounder of the Health Equity Leadership and Exchange Network (HELEN). He is the author of the new book, 150 Years of ObamaCare (Johns Hopkins University Press). 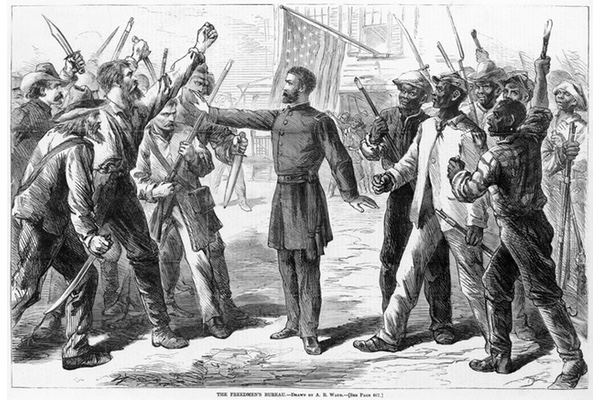 A Bureau agent stands between armed groups of whites and Freedmen in this 1868 picture from Harper's Weekly.

This year marks a critical juncture for our country – one that presents both opportunities and challenges for health reform, and will determine whether or not we embrace the traditions of the past 150 years and move toward a more equitable, accessible, and patient-centered health system. What is most concerning today is that if we do not pay close attention to our history of comprehensive health reform, the remarkable gains we have fought so hard to attain over a century and a half, could be wiped out, moving us backwards in terms of health care coverage, access, delivery, and equity. 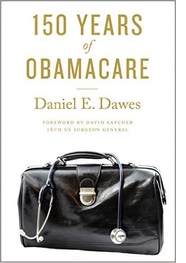 The Supreme Court, in its history, has never overturned a major health law, but we watched with bated breath whether the Court would do so this time around with the Affordable Care Act – a law more sweeping than previous health legislation and which incorporated broader civil rights protections. Fortunately the Supreme Court has so far followed contemporary precedent regarding health laws, but how could we be sure the Court wouldn’t do what a prior Court did in 1883 when it overturned the Civil Rights Act of 1875? In both instances when the Supreme Court ruled in favor of upholding the Affordable Care Act, the Court punted the demise of this law to the political process, arguing “[m]embers of this Court are vested with the authority to interpret the law; we possess neither the expertise nor the prerogative to make policy judgments. Those decisions are entrusted to our Nation’s elected leaders, who can be thrown out of office if the people disagree with them. It is not our job to protect the people from the consequences of their political choices.”

Now with the Supreme Court settling the constitutionality of the Affordable Care Act, history affords us an opportunity to understand whether it is even possible six years after a major health law has been implemented to completely dismantle it via the political process. The answer is a resounding yes! Contrary to the belief held by many proponents of the ObamaCare law that Republicans are bluffing about their attempts to repeal the Affordable Care Act or that it could never happen at this point, that simply is not the case. 150 years ago, the Freedman’s Bureau Act was signed into law after the Civil War affording blacks and others access to health care across the country, especially in the South. However, seven years after this law was enacted, having survived every reauthorization, Congress decided to shut it down indefinitely – jeopardizing care to our nation’s most vulnerable people.

The Affordable Care Act is a test of whether we will go back 150 years to a time in our nation’s history when there was no appetite to implement a law overwhelmingly helping groups that were marginalized or uphold a law that would have elevated rights and protections for vulnerable populations. It is very clear that this is the first health reform statute in recent decades allowed to stand, but just like the Freedman’s Bureau, which lasted only seven years … if we are not careful, ObamaCare could see a similar fate.

I was quite hopeful that partisan political attacks on ObamaCare were subsiding when the Republican-led Congress passed the Medicare Access and CHIP Reauthorization Act (MACRA) one year ago, which reauthorized most of the programs that were in the Affordable Care Act. In fact, the MACRA legislation even expanded some of the ACA policies such as delivery and payment system reforms, making it in essence the health reform extension bill. However, the political backlash escalated again when the Supreme Court upheld ObamaCare once more last summer in 2015.

150 Years of ObamaCare explores the hidden backstory of the Affordable Care Act, shedding light on the creation and implementation of the greatest and most sweeping equalizer in the history of American health care. I wrote this untold story to draw back the curtains and offer an insider’s look into the crafting of the health reform law and provide an unprecedented review of the health equity movement past, present and future.  I wanted to develop a resource highlighting the little known leadership efforts over the past 150 years to push for mental health reform, minority health reform, and universal health reform and how and why these efforts were successful this time around.

150 Years of ObamaCare highlights how and why the health reform law became the most inclusive law ever passed by Congress, not only in terms of its content, but in terms of the process - the stakeholders who were brought to the table, including racial and ethnic minorities, LGBT individuals, women, people with disabilities, and veterans. The book also highlights what we have left to do to ensure these reforms are not only implemented, but implemented in a manner that will greatly benefit all of our communities.

I wrote 150 Years of ObamaCare so that current and future generations of health equity advocates, students, and scholars can learn from our efforts, build upon our successes – understanding what strategies we employed and why, what challenges we faced internally and externally, and how we overcame them.

I also wrote this book to help leaders across our nation, whether in health care, public health, policy, and in other areas gain a better understanding of this landmark law – overcome some of the challenges it presents and leverage the numerous opportunities that are available.

Those who continue to oppose the Affordable Care Act would, undoubtedly, be on the wrong of side of history just like those 150 years ago who opposed and worked to effectively undermine a law intended to provide access to medical care to African Americans and other groups. 150 Years of ObamaCare highlights this historic inflection point, and what is at stake after November 2016.