The Sadly Uncontroversial First Black Superhero in a Comic Book

by Patrick Hamilton and Allan Austin

Patrick Hamilton, Ph.D., associate professor of English, and Allan Austin, Ph.D., professor of history and government, at Misericordia University are currently finishing a book on race and superheroes since World War II. Misericordia University is the oldest four-year institution of higher education in Luzerne County, and ranks in the top tier of the Best Regional Universities – North category of U.S. News and World Report’s 2016 edition of Best Colleges and was designated a 2016 Best Northeastern College by the Princeton Review. 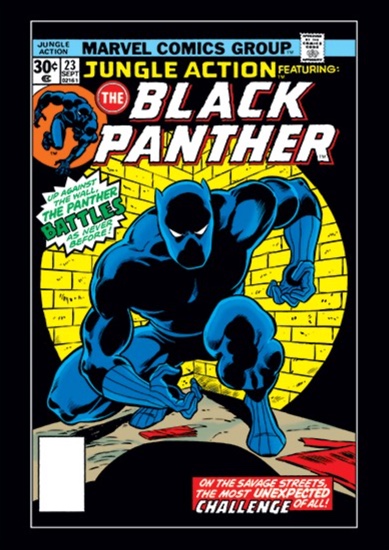 Comics’ first black superhero – Marvel’s Black Panther – is undergoing a bit of a renaissance this spring. The character, played by Chadwick Boseman, will soon join the Marvel Cinematic Universe, debuting in May’s “Captain America: Civil War’’ before headlining his own film, scheduled for release in 2018.

National Book Award-winner and MacArthur “Genius Grant” recipient Ta-Nehisi Coates will write a new Black Panther series with artist Brian Stelfreeze. The Atlantic, currently online and in its April 2016 issue, features an exclusive preview and interview with Coates regarding the series.

This sudden ascendancy aside, Black Panther’s history in comics has more often been suggestive of the limits impinging black identity in the U.S. He and Wakanda, the fictional African nation he rules, first appeared in “Fantastic Four” #52 (July, 1966), but evoked the stereotype of the “noble savage,” juxtaposing wondrous technology and primitive stereotypes. In “Avengers” #52 (May, 1968), Black Panther joined Marvel’s Avengers, but kept his identity as a black man hidden from the general public of the Marvel Universe until issue #73.

But perhaps most evocative of these limits was a guest appearance in “Fantastic Four” #119 (February, 1972), where he leaps into battle suddenly calling himself “The Black Leopard!” As he explains, he’s eschewed his former title due to the “political connotations” that the name Black Panther now carries in the U.S. Though he claims to “neither condemn nor condone” the actions of the Black Panther organization, his writers felt behooved to tread carefully and draw a clear line between their hero and the nationalist group, as well as the black identity they asserted.

The Black Panther’s and his creators’ decisions to play it safe politically resulted quite naturally from the corporate history of Marvel. The company had struggled to find its footing in an industry long dominated by DC Comics, which, after World War II, insulated its heroes from Red Scare crusaders by focusing on fantastical stories that avoided controversial topics like race.

Marvel challenged DC’s conservative approach in the early 1960s, grounding its revived superhero tales more concretely in pressing social issues like the continuing power of American racism. While Marvel’s efforts were far from perfect – it looked at race intermittently and relied on stereotypes too often – writers like Stan Lee and artists including Jack Kirby and Steve Ditko presented stories that at least occasionally promoted a liberal, multicultural agenda.

But Marvel’s engagement with social justice had limits. Lee addressed contentious subjects in non-controversial ways, always making sure that his fare did not offend with too radical a message and thus could sell without controversy. His strategy mirrored broader social trends that encouraged “safe” conversations about race that would not offend mainstream Americans.

Flash forward almost half a century, and we see that these same issues still inhibit black expression. The Black Lives Matters movement, for example, began on a straight-forward enough note: American society must acknowledge and address continuing violence against African Americans. A backlash was immediate, the competing All Lives Matter movement arising to limit the conversation; its suggestion that all lives are the same in 21st century America ignores disparate lived experiences created by race.

Similarly, it is interesting to note the hub-bub caused by Beyonce’s recent nod to the Black Panthers during her Super Bowl half-time show. One imagines that a tribute to Martin Luther King, Jr. – a comfortable subject for the mainstream – would not have generated the same kind of backlash. Again, we seem willing to address race, but only on terms that are “safe” and thus don’t challenge those who are in power to really listen to the grievances of those who are not.

These examples suggest the continued need for an honest and open national conversation about race. In the late 1990s, writer Christopher Priest and artist Mark Texeira presented a more political Black Panther series that grounded the hero in a racialized society, and the inclusion of Everett K. Ross, the series’ point-of-view character, in “Civil War” suggests the film character’s potential basis in this version. And one supposes that Coates’s Panther will hew more closely to this approach than to the Marvel line of “safe” liberalism in the 1960s.

In any case, the Black Panther’s vexed history mirrors all too well the American struggle with race since the advent of the Civil Rights Movement, and suggests all too clearly our need for more honest and searching conversations about just what has changed since the movement – and what hasn’t.