Britain’s EU Referendum: What Is At Stake?

Deepak Tripathi is a fellow of the Royal Historical Society and of the Royal Asiatic Society of Great Britain and Ireland. He is a historian with particular reference to the Middle East and South Asia, the Cold War and America in the world. The latest volume of his Middle East trilogy is Imperial Designs: War, Humiliation and the Making of History (Potomac, University of Nebraska Press). He maintains a blog, Reflections, where many of his writings can be found.

A continent away from the presidential primaries in the United States, Britain is in the midst of an acrimonious campaign ahead of a referendum to be held on June 23 this year. The purpose is to decide whether the United Kingdom should remain a member of the European Union, a political and economic association covering much of Europe, or leave.

The idea of such an association was first advocated by the British war-time leader Winston Churchill. In a famous address at the University of Zurich in 1946, just after World War II, Churchill spoke of there being “a remedy which would make all Europe free and happy.” It was to “recreate the European family” and provide it with “a structure under which it can dwell in peace, in safety and in freedom.” He called it “a kind of United States of Europe.” 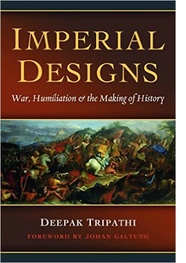 Churchill’s dream became a reality with the Treaty of Rome of 1957, and the creation of the European Economic Community. That association is known as the European Union today – the result of years of evolution. Ironically, when the European Economic Community was established, the French President, Charles de Gaulle, doubted “the UK’s political will” to be a member. France vetoed Britain’s application twice, in 1963 and 1967, and London had to wait until 1973 before it could join.

More than half a century on, Britain faces uncertainty again in its relationship with the rest of Europe. The issue of whether to stay in the European Union or exit divides the country, and the argument is getting louder and louder as the June referendum approaches.

The governing Conservative Party of Prime Minister David Cameron is deeply split. A number of senior members of his cabinet, more junior ministers, and as many as a hundred Conservative MPs, have declared their support for leaving the European Union. Their decision goes against their own government’s policy to remain, with some “opt-outs” from the EU Treaty that the prime minister has secured after lengthy negotiations. The governing party’s divisions have created an extraordinary situation in a parliamentary democracy which is supposed to have a cabinet with collective responsibility.

On the other hand, members of other political parties generally support the idea of Britain’s continued membership, with the exception of the United Kingdom Independence Party. With just one member in the British Parliament, UKIP’s demands center around leaving the EU, and imposing rigid controls on immigration into Britain. UKIP and Conservative opponents of EU membership assert that this is the only way for the United Kingdom to regain its sovereignty lost to the European Union.

The essence of their argument is that membership of the EU means having to accept laws made by the European Commission and Parliament. Although both have representatives of Britain and other member-states, it hardly matters for opponents. Their complaint – it means that the United Kingdom cannot govern itself.

Advocates of Brexit, as the idea of leaving the EU is called, insist that all laws governing the United Kingdom, in particular immigration, trade, justice, must be made in the British Parliament in London. They will accept nothing short of total sovereignty. Their solution is to negotiate separate trade deals with countries which Britain wants to do business with, and for the UK Parliament to pass all legislation to govern the country.

As in the United States, the resentment in certain sections of British society against foreign workers is strong. Those sections form the core of opposition to Britain’s membership of the European Union. They want cuts in the numbers of foreign workers, and the benefits of those who remain in the country. Little attention is paid to consequences for nearly two million UK citizens living in the rest of the European Union.

Will British citizens keep their right of free movement and freedom to work across the European Union under the system of reciprocity currently available? Will their status as permanent residents, and benefits like health and social security, be safe in other member-countries if Britain leaves? How will Britain’s exit influence the attitudes of other countries? These and other questions must be part of the current debate which could lead to a major realignment of British foreign policy. Supporters of Britain’s continued membership of the European Union have begun to raise these questions. And a lot of heat is being generated between the two sides.

Words of warning are being heard from across the borders. President Hollande of France has said that if British voters backed exit from the European Union, there would be “consequences” for Britain. His economy minister Emmanuel Macron was more direct. He said that France would end border controls agreed with the United Kingdom, opening the way for large numbers of migrants to move into Britain. The English Channel separating Britain and France is less than 20 miles wide. And with millions of people arriving from war-torn countries of the Middle East to the European continent, the prospect of large numbers of them heading for Britain’s shores is a nightmare.

Supporters of Brexit lament not just the loss of national sovereignty, but also the size of Britain’s financial contribution, €11.3 billion in 2014, to the EU budget. In comparison, Germany paid nearly €26 billion, France €20 billion and Spain €10 billion. The argument of Brexit advocates is that the United Kingdom could negotiate separate agreements with EU member-states, and pay even less, like Norway – without joining the association. Often ignored is the fact that Norway still pays into the European Union budget for privileges it receives, and the Norwegian economy is much smaller.

The referendum in June is not just about Britain’s membership of the European Union. It is about unhindered trade, movement of EU citizens, cooperation for mutual security; and about how British expatriates are treated by others, depending on how their citizens are treated by the United Kingdom. The stakes are high, and the opinion so evenly divided that the outcome hangs in the balance. In this climate of uncertainty, some will still find justification in General de Gaulle’s skepticism about Britain, expressed more than half a century ago. Others will hope that British voters will make a choice driven on the idea of a shared destiny, not past doubts.