Nancy Reagan's Role in the Disastrous War on Drugs

Tony Newman is the director of media relations at the Drug Policy Alliance (www.drugpolicy.org) 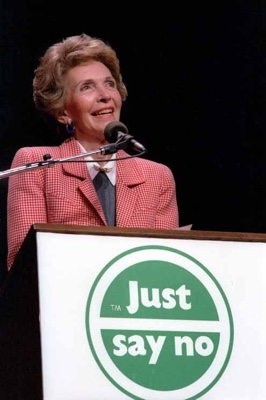 Reagan gives a speech at a Just Say No rally in Los Angeles, 1987.

Nancy Reagan, the former first lady and widow of President Ronald Reagan died on Sunday in California at age 94. Front pages around the world are remembering her life. The stories all talk about the powerful love between Nancy and Ronald and her impactful role as first lady. When highlighting her advocacy, one of the first things that often pops up is her starring role in President Reagan's embrace and amplification of the war on drugs. Nancy's "Just Say No" campaign became her signature issue and a defining legacy for both her and her husband.

Having spent the last 16 years working at the Drug Policy Alliance, an organization that believes the war on drugs is a failure and drug use should be treated as a health issue, not a criminal issue, Nancy and Ronald Reagan bring up a lot of emotions for me. While the press often talk about their strength, love and optimism, I see two people who are most responsible for our country's mass incarceration and destruction of millions of people's lives.

Richard Nixon officially launched the drug war in 1971, but his war was modest compared to Reagan's war. Reagan's presidency marked the start of a long period of skyrocketing rates of incarceration, largely thanks to his unprecedented expansion of the drug war. The number of people behind bars for nonviolent drug law violations increased from 50,000 in 1980 to more than 400,000 by 1997.

Who can forget Nancy Reagan sitting in classrooms and all over our television sets with her simplistic "Just Say No" campaign? It was during this time that the DARE programs were implemented in schools across the country, despite their lack of effectiveness. Los Angeles Police Chief Daryl Gates, who believed that "casual drug users should be taken out and shot," founded the DARE program, which was quickly adopted nationwide.

The Reagans' "war at home" was not only ineffective, it was disastrous. Upon taking office in 1981, Reagan shifted drug control resources from health agencies to the Department of Justice. It was under Reagan's guidance in 1986 that the worst of the federal mandatory minimum drug laws were passed into law. These laws included the crack sentencing guidelines that meant that someone possessing just 5 grams (two sugar packets) worth of crack received an automatic 5 years in prison. These laws filled our prisons for decades with low-level drug users.

The irony is that Ronald Reagan's own daughter developed a cocaine problem, but I don't imagine the Reagans pushed for her to serve 5 years in a cage for her addiction. No, it was African Americans, who despite using drugs at similar rates as whites, were targeted by law enforcement and incarcerated at grossly disproportionate rates. ...