Steve Kemper is a freelance journalist and the author, most recently, of A Splendid Savage: The Restless Life of Frederick Russell Burnham. 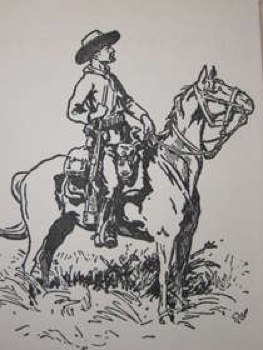 Burnham, drawn by Robert Baden-Powell, founder of the Boy Scouts

For a biographer, Frederick Russell Burnham is a gift with some sharp edges. His life (1861-1947) was overstuffed with thrilling incidents. He was friends with people who shaped history, including Cecil Rhodes and Theodore Roosevelt. According to John Hays Hammond, Burnham was one of the few people who could turn Roosevelt into a listener. Burnham helped inspire another friend, Robert Baden-Powell, to found the Boy Scouts. 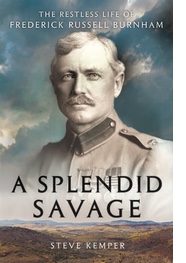 He had a knack for landing in the middle of the action. As a youth in the Arizona Territory, he got entangled in a range feud as a gunman, in boomtown Tombstone as a smuggler, and in the Apache wars as a scout. He worked as a shotgun “messenger” guarding silver bullion on Wells Fargo wagons, and as a prospector in the desert mountains of California and Arizona. In the early 1890s, when the West began to feel tame, he left for new frontiers in what would soon become the colony of Rhodesia, where his exploits in the Matabele wars, including his role in two famous incidents, the Shangani Patrol and the assassination of a high priest of the native god Mlimo, helped make him world-famous as “the American scout.”

He joined the Klondike gold rush, then returned to Africa when Lord Roberts, the commander-in-chief of British forces in South Africa, asked him to become Chief of Scouts during the Boer War, a rare invitation for an American. His feats behind enemy lines earned him the rank of major and the Distinguished Service Order from King Edward VII.

Next he led mineral explorations into remote regions of west and east Africa before returning to the United States. In 1909, during a meeting in El Paso between President William Howard Taft and Mexico’s President Porfirio Diaz, Burnham’s quick action helped foil an apparent assassination attempt. A couple of years later he got swept into the Mexican revolution. In 1917 Roosevelt invited him to be an officer in his ill-fated volunteer corps for World War I. By that point Burnham was an active conservationist and friend of Gifford Pinchot. In his 60s he finally found his elusive bonanza and built a mansion in the Hollywood hills.

As I said, he was in many ways a gift for a biographer. But Burnham was a man, not a cartoon action-hero, and his life was far more complicated than it sounds in dashing outline. He endured many failures and defeats. War and work separated him for long periods from the wife he cherished, and he lost two children in tragic circumstances. A few Rhodesian historians called him a liar and hoaxer, charges repeated by later historians. Others have denounced him as a racist warmongering imperialist. So researching and writing about him wasn’t all rousing adventures and gun smoke. The complexities of his life became one of the pleasurable challenges of reporting it. And though he’s no longer a household name, his story intersected many bigger, better-known ones, and allowed me to visit a lot of rich history, including the settling of the West, the scramble for Africa, the exploitation of global resources by big business, and the birth of the conservation movement.

Like everyone interested in the past, I was struck by the links between then and now. The eternal themes of history seem to pop up like mushrooms from vast mycelia whose filaments branch invisibly beneath continents and centuries.

Much of what motivated or angered Burnham remains familiar. We are still having the some of the same arguments, still facing, or ignoring, many of the same issues. Burnham left the U. S. for Africa partly because he was disgusted with the corruption and inequities of the Gilded Age. He felt that the rich had rigged everything in their favor by buying banks and politicians. Wealth was becoming concentrated in fewer and fewer hands, pinching off opportunities for everyone else. Burnham became an ardent supporter of the socialist ideas in Edward Bellamy’s utopian novel, Looking Backward: 2000-1887 (1887), which condemned the greedy “beasts of prey” fattening on unregulated capitalism while the rest of the population scrambled for crumbs. It’s not a big jump to today’s corporate robber barons, super-PACS, and the rhetoric of Bernie Sanders.

Similarly, in 1893 and 1907 Burnham lost almost everything when the U. S. economy collapsed because of overinflated stocks, manipulation of the markets, and high-risk loans made by greedy unregulated banks. Sounds familiar.

Social issues from Burnham’s time still bedevil us. Like most white Americans of his era, Burnham believed the white race was superior, and that some whites were superior to others because of their western European ancestry. These attitudes molded his views about immigration, which he generally opposed; he was particularly hostile to immigration from Mexico and Asia. Yet he revered his own ancestors for emigrating from Britain to find a better life, and he did the same thing by emigrating to Africa as a young man. He considered his anti-immigration stance in the United States patriotic, because the country needed protecting from an influx of needy undesirables. Nearly a century later, some of our presidential candidates, including second-generation immigrants, are exploiting xenophobia and racial bigotry with tough talk about immigration under the guise of patriotism.

In the same vein, Burnham fumed when Woodrow Wilson balked at joining Britain and its allies in World War I. Burnham believed that democracy itself was imperiled by German militarism, whose violent zealots willingly died for their beliefs. He mocked Wilson and his supporters as milksops, capons, molly coddlers. The vocabulary has changed, but not the alarming rhetoric or the clashing viewpoints about America’s role in the world, and when to use our might against foreign threats.

Many admirable traits also link us to Burnham and his era. They are hard to see in our time of angry disillusionment and paralysis, but are worth remembering and recovering. Burnham prized courage, sacrifice, and self-reliance, and had a very American confidence in his unlimited capacity to shake off defeat and make a fresh start. Despite many setbacks, he remained an optimist who never lost faith in the future. He believed that each of us can shape our destiny and contribute to our historic moment. He proved that belief again and again, in ways sometimes appalling, sometimes splendid, and always fascinating.