"Advice & Consent"? No One Really Knows What the Founders Had in Mind. 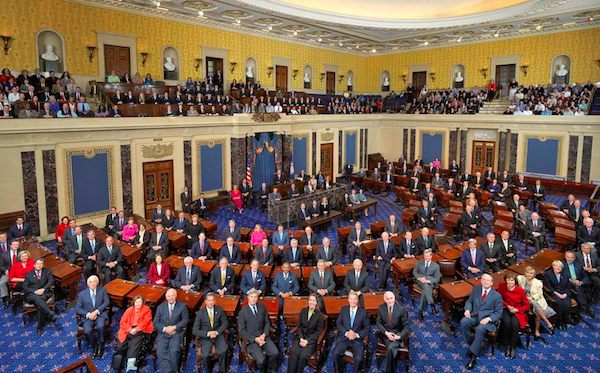 If the framers had ended their work two weeks before they did, Mitch McConnell and his colleagues in the Senate would not be required to confirm or deny President Obama’s nominee to the Supreme Court. Instead, they could appoint the new justice themselves and be done with it. The president would have no say in the matter.

That is how things stood as of September 3, 1787, after more than three months of deliberations. Originally, the Virginia Plan gave the power of judicial appointments to “the national legislature.” When delegates first addressed that provision on June 5, James Wilson suggested granting that authority to the executive. James Madison countered that he preferred the Senate. The matter was tabled, but on June 13, with little debate, the Convention agreed unanimously on appointment by the Senate. Then on July 18, Nathaniel Gorham of Massachusetts moved “that the Judges be nominated and appointed by the Executive by & with the advice & consent of the 2d. branch.” That method, he argued, was “the mode prescribed by the constitution of Masts. [Massachusetts}. This mode had been long practised in that country, & was found to answer perfectly well.” When Gorham’s motion came to a vote, four states were in favor and four opposed, which by the rules of the Convention meant that it failed. The Committee of Detail report of August 6, the first complete draft of the Constitution, affirmed once more that “The Senate of the United States shall have power … to appoint … Judges of the Supreme Court.” That draft also affirmed that the president would be chosen by Congress and serve a single seven-year term.

Appointment of Supreme Court justices did not resurface until Tuesday, September 4, when a committee consisting of one member from each state, known now as the Committee on Remaining Matters, reconstituted the presidency and re-calibrated the proposed government’s “balance of powers.” To free the executive from control by the legislature, it recommended that the president be chosen by special electors rather than by Congress. Further, it transferred treaty-making and appointive powers from the Senate to the newly liberated president, “by and with the advice and consent of the Senate.”

George Mason strenuously objected (all of Mason’s objections were strenuous) to the appointment of Supreme Court justices by the Senate, by the President, or by the President with the advice and consent of the Senate. It would be “dangerous” for a president to exercise such powers alone, he contended, yet appointments were hardly legislative matters. He suggested that the Convention create a “privy Council” or “Executive Council,” to be chosen by the Senate for the express purpose of advising the president on such matters.

Benjamin Franklin agreed. He feared “cabals” in the Senate but had no confidence in appointments “by single persons.” On the other hand, “a Council would not only be a check on a bad President but be a relief to a good one.”

Convention heavyweights James Madison, James Wilson, and John Dickinson also supported Mason’s proposal, but it failed in the end by a vote of three states to eight. Left unsaid: At this late stage in the game, the day before the Convention would direct the Committee of Style to compose an almost-final draft of the Constitution, and only ten days before adjournment, the framers had no will to create a brand new entity, however beneficial that might be.

An executive council was hardly a novel approach. As Nathaniel Gorham had stated, the Massachusetts Constitution of 1780 provided for a separate “council for advising the governor in the executive part of government.” Other state constitutions also empowered governors to make appointments “by and with the advice and consent of the Council.” Typically, as Maryland’s Constitution of 1776 explicitly directed, a council was to consist “of the most sensible, discreet, and experienced men” who would offer advice, often in writing, and who would grant consent on executive matters like judicial appointments. This was a refinement of colonial charters, in which a governor’s council often doubled as the upper house of the legislature.

For reasons never fully explained, the framers adopted the term “by and with the advice and consent” but opted to return to the old colonial system, with one body serving dual functions. When there is an executive council, the idea of “advice and consent” makes sense; in fact, it defines the very function of such a body. But how, exactly, is a president to seek the “advice and consent” of the Senate, a much larger group charged with the task of legislating for the nation?

Consider first “advice.” Although presidents through history have sought advice from individual senators, we do not expect them to quiz the body as a whole before making nominations; we don’t even expect them to ask the Judiciary Committee for a list of candidates or for consultations on the matter. According to the Constitution, the president alone “shall nominate” a candidate (no advice mentioned there) and “by and with the Advice and Consent of the Senate, shall appoint … Judges of the supreme Court.” The only “advice” the Senate could offer at that point would be to withdraw the nomination, tantamount to a denial of “consent.” With an executive council, which the framers rejected, it’s advice and consent; with the upper house of the legislature, it all boils down to consent.

So what does “consent” mean?

As soon as the First Federal Congress tried to implement the Constitution, trouble arose over the appointment of “other public Ministers and Consuls,” as stipulated in the same sentence in the Constitution. Although this does not bear directly on SCOTUS appointments, it does reveal that the framers had no firm grasp on just what consent entailed.

On June 16, 1789, a House committee outlined the office of a Secretary of Foreign Affairs, located of course in the executive branch. The committee stated what seemed to be obvious: the Secretary would be “removable from office by the President of the United States.” Hold on, some congressman said. “If the Senate are associated with the President in the appointment, they ought also to be associated in the dismission from office,” and Congress therefore had “no right to deprive the Senate of their constitutional prerogative.” As one senator would soon argue, “It is a maxim in legislation as well as reason that it requires the same power to repeal as to enact. The depriving power should be the same as the appointing power.”

The matter seemed cut-and-dry, but not to James Madison. After admitting that the Constitution was “silent” on dismissals, he put forth an argument that was more pragmatic than legal. If the president required the concurrence of the Senate before removing an executive officer, that officer could ensure his tenure in office simply by courting the approval of the majority of senators. The Secretary of Foreign Affairs and other important officials would thus come under the sway of legislators instead of the chief executive, and accountability to the president would be lost. Department heads could endure in office indefinitely, while the president had to stand for re-election every four years. The entire notion of a single chief executive would thus be undermined, or, in Madison’s dramatic words, “the power of the President” would be reduced “to a mere vapor.”

It was the nation’s first crisis over Constitutional interpretation. If Congress decided one way, department heads would be under the direct command of the president, and there would in fact be a single chief executive; if it decided the other way, executive department heads would wind up either answering to the Senate or playing the Senate against the president, effectively creating fiefdoms within their respective fields of authority. After a contentious debate, the House passed the committee’s recommendation, but the Senate deadlocked. John Adams, exercising his authority as vice president, broke the tie. Had one more senator decided that dismissal required the Senate’s consent, the balance of power in our government would have been fundamentally altered.

While the Constitution was silent, Alexander Hamilton, characteristically, was not. During the ratification debates, opponents of the Constitution worried about both senatorial powers and presidential powers. Hamilton, in The Federalist #66 and #76, tried to assuage both concerns by explicating the “advice and consent” relationship. Because the president staked his reputation on the person he nominated, he’d make a careful choice. Even so, if he were ever swayed by “State prejudice,” “family connection,” “personal attachment,” or “a view to popularity,” the Senate would be there to check him.

Not to worry about the Senate’s power either. That body “will merely sanction the choice of the executive,” Hamilton assured his readers. A senator would not gain by opposing a nominee because he happened to prefer somebody else; the president’s next choice was unlikely to be that senator’s preference, and the second might not be any better than the first. Senators would therefore judge the nominee on merit alone. Further, they would not want people to believe they questioned “the judgment of the Chief Magistrate.” Giving their consent would be “an efficacious source of stability in the administration”—and surely all senators would like that.

For these reasons, Hamilton concluded, “the necessity of their concurrence would have a powerful, though in general, a silent operation… It is not very probable that his nomination would often be overturned.”

Would it were so today. The current Senate is more than eager to question “the judgment of the Chief Magistrate,” and the avowed aim of Republican senators is to undermine the administration, not provide “stability.” Nor, in this age of unrelenting media buzz, is there much interest in “a silent operation.” Ironically, those who call themselves Originalists, and who hang on the framers’ every word, loudly broadcast their intention to thwart the Chief Executive at this and at every turn.

Not that Hamilton spoke for all the framers, nor was he an impartial commentator. His express purpose in the Federalist essays was to persuade people that the Constitution should be ratified. Also, Hamilton did not practice what he preached: in 1795 he lobbied the Senate to reject the appointment of the highly qualified John Rutledge as Chief Justice because Rutledge had come out in opposition to Jay’s Treaty. But when the meaning of a term is questioned, as with the muddled “advice and consent,” Originalists love to turn to The Federalist to find answers. As apologists for Republican obstructionism indulge in the popular sport of cherry picking to support the Senate’s noncompliance, I doubt they will even notice, much less admit to, Hamilton’s calling them out.

Political maneuvering aside, there is a real and meaningful debate over how the Senate should exercise its authority to grant or withhold consent. While all agree that senators should consider, first and foremost, a nominee’s qualifications and abilities, much as Hamilton suggested, at issue now is whether differing methods of constitutional interpretation help define abilities and are therefore fair game. Can senators state, for instance, that only an avowed Originalist has the ability to interpret the document the Supreme Court must uphold? Or that Originalism is a sham, a mere disguise for judicial activism that reverses settled law?

Unfortunately, the Constitution is mute on methods of Constitutional interpretation, so it cannot possibly be a guide as to whether a nominee has the correct one. The framers did not even specify, in that clear and cogent language for which they are justly praised, who should handle such matters. That was for jurists of the Early Republic to settle, and not without contentious debate.