Sanders and Trump: How the Political and Media Establishment Got 2016 So Wrong 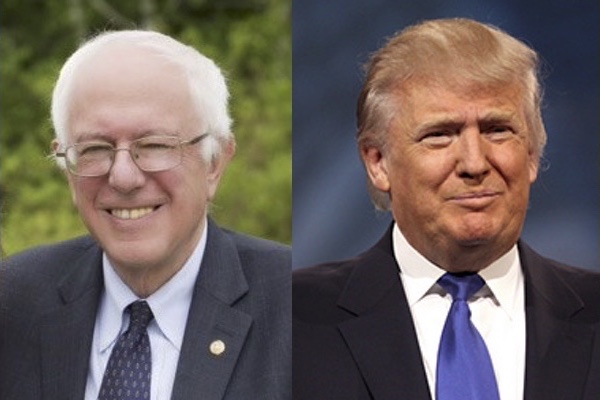 And here's why: the economic and social wreckage wrought by the Great Recession of 2007-2009, which flat lined the lives and aspirations of so many, barely registered on the lifestyle Richter scale of media and political heavies.

Some of these elites may have seen their bull market portfolios or 401(k) plans dip, and for those trying to sell vacation homes they saw demand soften a bit. But as economic growth recovered so did their assets, and for the most part the recession to them was a talking point, a dinner party topic.

Not so for the vast majority of Americans. The recession's economic pandemic may have caused the establishment only seasonal sniffles, but it has had an ongoing, debilitating, and personal impact on working and middle class Americans. And to young people raised to believe in a buoyant America and bigger future, a pinched economy is all they have known.

Those who owned homes saw their property values crater and with it the economic security embedded in the American Dream that homeownership used to represent. Eight years after the real estate bubble burst, thirteen out of every one-hundred homeowners remain seriously underwater on their mortgages, meaning that they owe a lot more than their homes are worth.

Daily insecurity is palpable and real to a large number of Americans. A year ago the Pew Research Center reported that about a third of Americans making $30,000 to $100,000 per year said that the recession had a "major effect" on their personal finances and they still have not recovered. For many, family expenses exceed monthly income, savings have essentially zeroed out, and debt – consumer, student and mortgage – leaves them at best running in place.

Feeling poorer is not supposed to be an American narrative, but largely because of the housing crisis and the recession, middle class families saw their median wealth fall by 28 percent between 2001 and 2013. And it may be worse than these numbers indicate. Economists at the Federal Reserve Bank of St. Louis concluded in a study published last April that middle class Americans "may be under more downward economic and financial pressure than common but simplistic rank-based measures of income or wealth would suggest."

A middle class that once saw itself central to the American Dream now seems to be on the outside looking in. And what they see with their noses pressed to the glass is a top tier of Americans accumulating wealth and income with little room at the party for anyone else.

Berkeley economist Emmanuel Saez calculates that the top one percent captured 58 percent of all income growth between 2009 and 2014, and the top ten percent now earns a greater share of the national paycheck than at any time in the past 100 years. Wealth is even more lopsided, according to New York University economist Edward Wolff: as of 2010, the top one percent holds 42 percent of the nation's non-home wealth, and for the top decile it's 85 percent.

Or consider this lead sentence in a 2014 New York Times article: "Corporate profits are at their highest level in at least 85 years. Employee compensation is at the lowest level in 65 years." So if corporations aren't investing profits in their workers, where are they putting the money? Many are buying back shares of stock and paying hefty dividends to shareholders, all of which benefits those who own capital, not those who work for capital.

Americans have long looked to government to right this imbalance, but this time they see Washington bailing out those on top at the expense of everyone else. In a 2015 Pew survey, about seven in ten Americans said that government economic policies since the recession have helped large banks, financial institutions, corporations, and the wealthy -- and have done little or nothing at all to help the middle class, small businesses, or those in poverty.

And politicians to their ironic credit confirm exactly what the American people are seeing: tone deaf Republicans who want to water down regulations on the financial industry and prioritize tax cuts for the wealthy – and tone deaf Democrats who claim to speak for working families but take millions in donations and speaking fees from the same Wall Street investment bankers whose recklessness helped create the crash.

What many Americans see is a go-along, get-along political culture that coddles the status quo establishment and holds no one responsible for the economic hardship the few visited upon the many.

So where do they turn for explanation and help? Enter Bernie Sanders and Donald Trump.

It's not the first time Americans have channeled their disaffection through political populism. Andrew Jackson proclaimed himself a "man of the people" unafraid to take on the "rich and well born," and he focused the economic anxieties of his era on the Second Bank of the United States, which he labeled a tool of wealthy elites and foreign interests and succeeded in dismantling it.

In the 1890s, with the agrarian economy convulsing from the industrial revolution, monopoly power, and a population shift from farms to cities, William Jennings Bryan led a populist wave that targeted banking manipulation, financial power, concentrated wealth, and corporate malfeasance – but also exhibited a strain of nativism, anti-intellectualism, and what the historian Richard Hofstadter called "the paranoid style."

Now unspool this populism and there are strands of both Sanders and Trump woven into it.

Sanders, the classic economic populist, provides ample evidence that big banks and institutions are playing with our nation's wealth and influencing democracy in a way that benefits themselves at our expense. Think of President Roosevelt decrying the "economic royalists" and "privileged princes" who, "thirsting for power, reached out for control over government itself." Think of the widespread popularity of the 2015 film, The Big Short, which chronicles how hubris and self-interest on Wall Street caused the economic hardship and pain on Main Street.

Trump too says he is not beholden to the moneyed class or the media establishment – notwithstanding his own vast wealth and celebrity status – but his populism veers more into a nativist mutation that expresses a generalized fear of decline and sense of betrayal, that other nations are getting the better of us, that hard-working Americans are getting the short end, that we are being overwhelmed by a mob at the gates and our leaders are too weak and ill-prepared keep us strong.

Work hard and you'll succeed, Americans are taught to believe. But what happens when people who play by the rules feel economically and politically dispossessed? Why does the system seem to reward those who caused the pain and punish those who have acted in good faith? When working hard leaves us treading water and gasping for air, where do we turn?

We gravitate to those who can help us make sense of the situation, identify who's responsible for our plight, and promise clear, straightforward, and decisive action. Which tribune we choose to support is simply a function of our ideological and cultural predispositions.

So as Americans were roaring a big cry of pain this past decade, few in the political and media hierarchy were hearing them. And when the roar got louder, the elites simply saw it as a reality TV show that was entertaining but not all that serious. Little did they realize that the roar was aimed directly at them.